What Not to Do in the Great Outdoors

It seems fine while you're there. Fun, even comical. But mistakes and missteps lead to injuries and deaths every year. But those are fools, right? Idiots. Not people like us.

Yes, people like us who are confident we know what we're doing. Even experienced hikers. It's the confidence that gets us. After witnessing a few mistakes during our vacation to Bryson City--and making one I never imagined would be that dangerous--I thought it best to share what not to do in the great outdoors.

There is one hard and fast rule: Don't approach them. Just keep your distance. It's one thing to happen on them as we did a bear on a Deep Creek trail and these bikers did when they reached the end of the Blue Ridge Parkway. 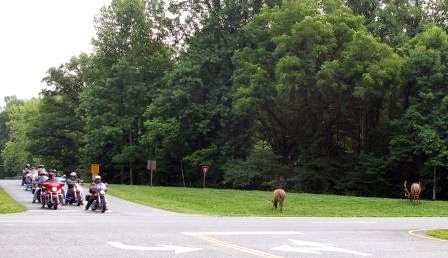 It's another to stop and engage the animal as tourists did on the Laurel Falls trail during our visit one year. After seeing a bear, they actually chased it to get photos. Never, never, never chase a bear. When we spotted one on the Indian Creek Trail two months ago, we turned around and headed back to the trailhead. And when we encountered the elk in the photo above while riding our bikes to Mingus Mill, we kept our distance. Unlike the motorists in these cropped photos. 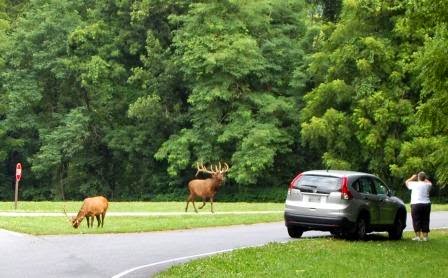 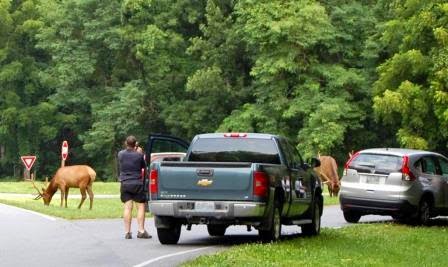 We related this tale to a park ranger shortly after this encounter, and he shook his head and told us the big elk in the photo has been known to ram vehicles during encounters such as this. Interaction with humans can also be dangerous for the animal. An elk had to be put down last year after he became too comfortable strolling up to humans. And if constantly fed, other wildlife such as bears no longer feed themselves. They also get a little too comfy ransacking campsites and the interior of cars in search of food.

Would you stand on the edge of your roof to gaze upon your neighborhood or to take a selfie? People who can't hang Christmas lights on their house because of the height seem to have no trouble standing at the edge of precipices or on ledges in the great outdoors. I've lost track of the number of stories I've heard where people have plunged to their deaths. So when people decided to stand on the ledge of an overlook at Newfound Gap, we weren't the only ones concerned for their safety 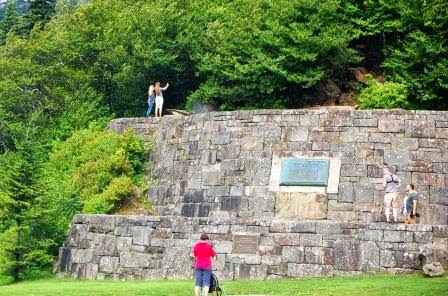 Every year, we hear of yet another death on a Carolina waterfall. Warnings are everywhere--in waterfall books, on websites featuring area waterfalls, and often along the trail. 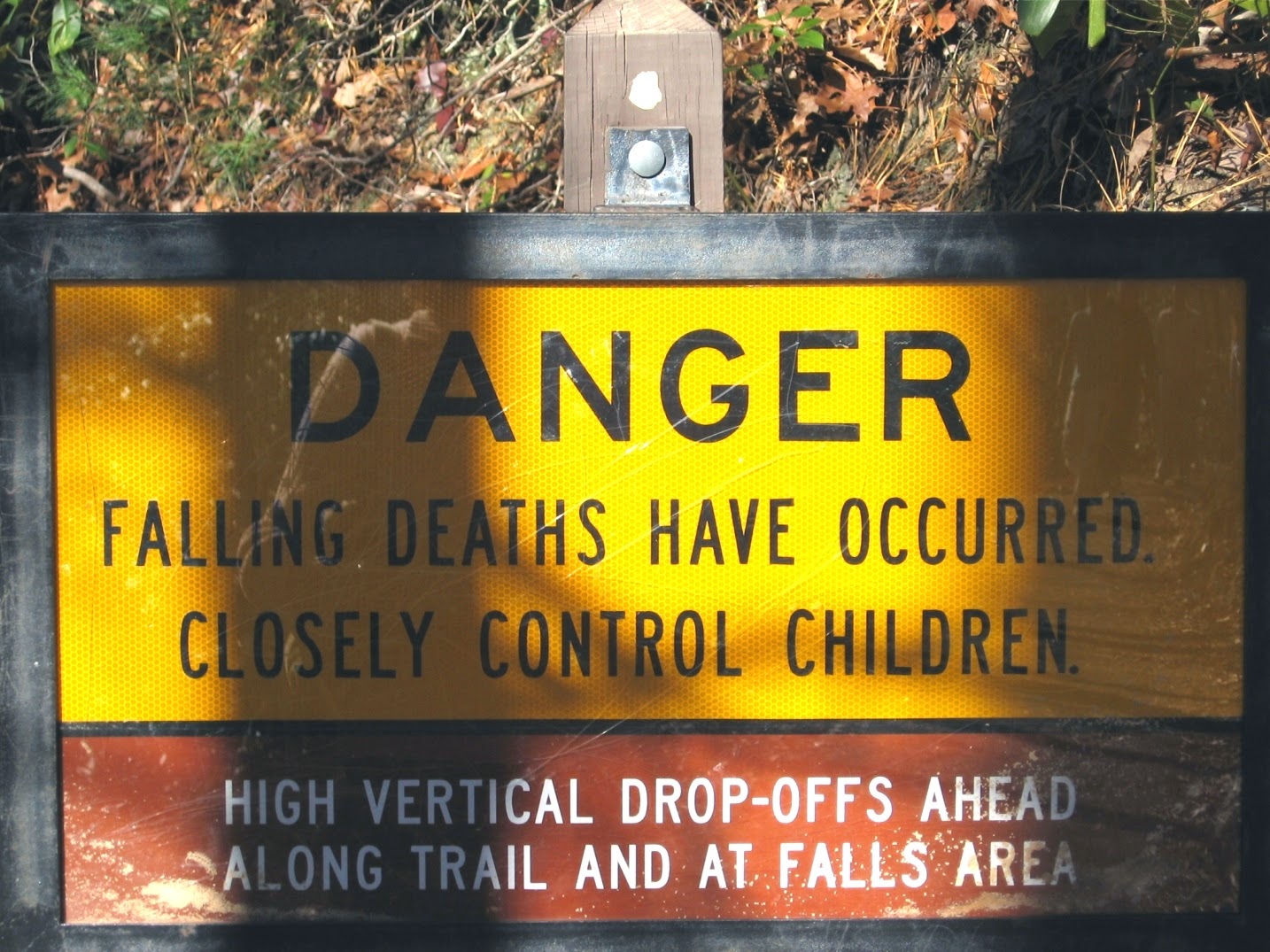 By now, everyone in the South should fully understand the dangers of climbing on and around these beautiful cascades. The rocks aren't just wet. A slimy film of algae beneath the water makes them slippery. And yet every year, someone climbs a waterfall or strolls along the top and falls. We witnessed such an event during our visit to Deep Creek.

The photo below is dark because I didn't have time to set it up properly. If you look in the upper left of Tom Branch Falls, you'll see a young man climbing on the rocks. A young lady is sitting on a ledge on the lower right. 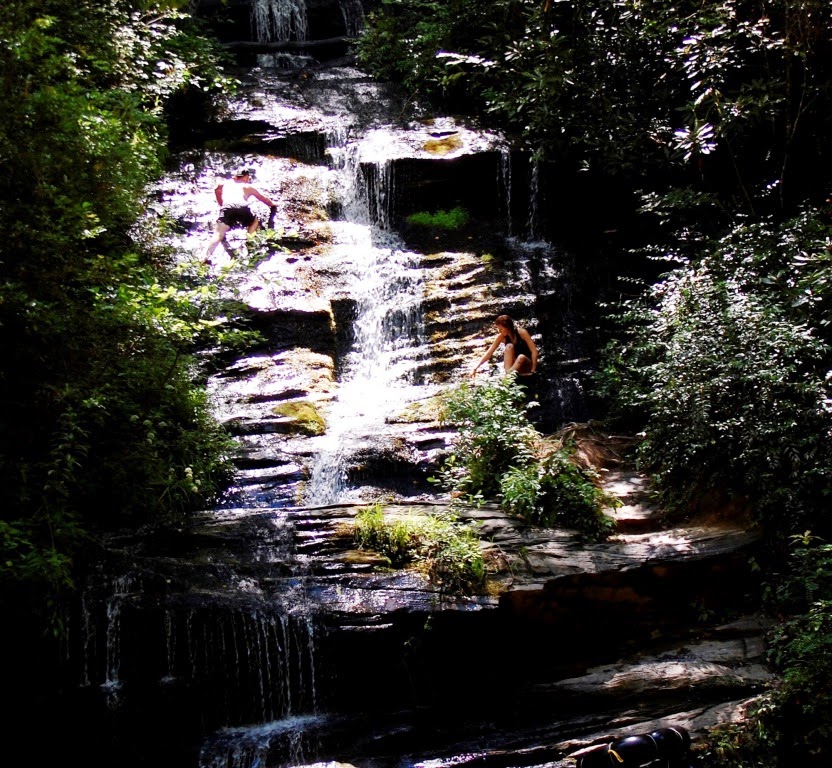 Here's a normal photo of the falls for scale. 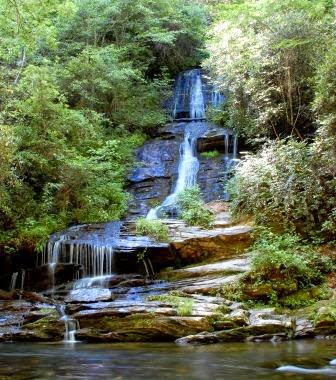 The young man was almost to the top when he slipped and landed on the ledge near the girl. He survived, but a snap we heard indicated he may have injured himself. Still, ego or pride compelled him to consider trying it again. Pain, the crowd that had formed along the banks, or perhaps me loudly asking my husband to talk some sense into the kid changed his mind.

He isn't alone. During our visit to Laurel Falls one year, we saw this upon our arrival. The falls continue just below that edge. 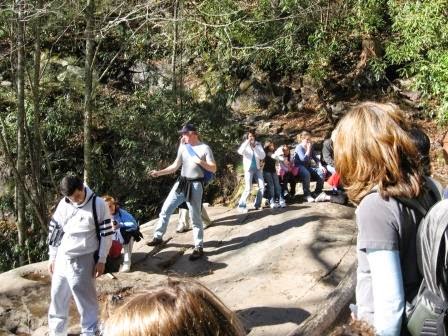 I've always wanted to ride a bike along the Blue Ridge Parkway, so during our visit to Cherokee, I did so. It was all downhill, and I was a little concerned about picking up speed during the ride, but I didn't want to pass up the chance. So we decided I would just ride my bike from one overlook to the next with my husband following behind in the car.

I never had to pedal. Between the grade and the curves, I suddenly found myself soaring down the Parkway. 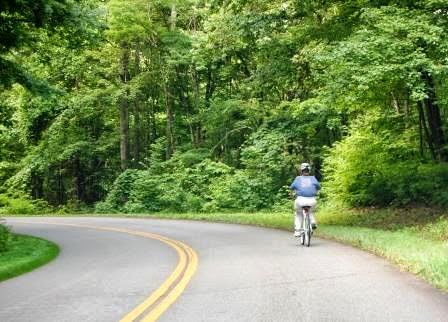 Look closely at the photo. I may look like I'm taking a leisurely ride, but wind is billowing through my clothes. I was terrified. Why? I felt every tiny little bump or deviation in the asphalt beneath my tires, and several times, I felt the tire slip when I hit something. When we reached the tunnel I had forgotten about, I pulled off the side of the road. Unfortunately, several cars were tailgating my husband and he was unable to stop. That left me to travel through the dark tunnel without backup and ample reflectors. So unless you're an experienced biker or well prepared, you might want to find a section of the Parkway that's flat.

As I have mentioned in several posts and one television interview, thanks to a plethora of lawsuits and regulations, people are accustomed to walking in buildings, homes, and along streets with a reasonable assumption of safety. However, the great outdoors doesn't care about safety or liability. It has its own rules and it's up to us to follow them. Use wisdom and common sense. Go and have fun, but don't take chances that may injure or kill.
Posted by Kimberli
Email ThisBlogThis!Share to TwitterShare to FacebookShare to Pinterest
Labels: safety, Warnings, waterfalls, Wildlife

Thanks, Kathy. I wish people would use more caution, especially around drop offs and waterfalls. It saddens us to hear stories of injuries and deaths.