Ralph Lane and the Lost Colony

Several months ago, I was asked to write an article featuring Christmas in Edenton, NC. If you haven't been there, Edenton is located off the Albemarle Sound near the Chowan River and it's quite the charming little town, especially during the holidays. I knew it was historical, but I did not know to what extent until I began researching its history. 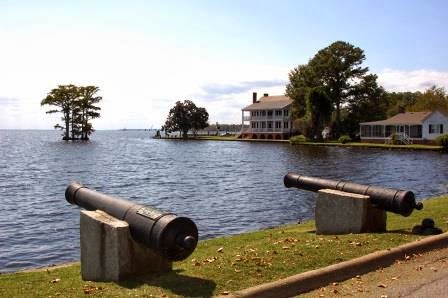 When I began my research, I set out to make a connection between Edenton and Edward Bland's journey into "South Virginia" in 1650 to trade with the natives and to investigate reports of Englishmen living among them. I'd read the account of the expedition in "The Discover of New Brittaine", which is online and also included in Narratives of Early Carolina 1650-1708. As it turned out, Bland and his group did not travel as far down as present-day Edenton, but in my research, I learned Ralph Lane, governor of Sir Walter Raleigh's second expedition, which landed on Roanoke Island in 1585, created a connection between English explorers and the hamlet on the sound when he visited the Weapemeoc (aka Yeopim) natives there. Finally, I had my connection.

But I was intrigued when my research also showed relations with the natives quickly deteriorated under Lane's leadership. Months later, he left a far more hostile world than what he had found. The following year, Walter Raleigh's third and last attempt to colonize the New World arrived at the same location.

Sadly, the magazine folded before the Edenton story could go to print, but below, I posted what was intended to be a sidebar item featuring my take on the Lost Colony and what may have led to its demise.

UPDATE: I've learned much since I first published this post, and the facts are far more fascinating and complex than I had realized. Click here for a link to the updated post.

Did Sir Walter Raleigh’s Second Expedition Set the Third Up for Failure?

Sir Walter Raleigh’s second expedition to the New World was a military endeavor. With Ralph Lane serving as governor, the group settled on Roanoke Island, which Philip Amadas and Arthur Barlowe had explored the previous year during a scouting mission funded by Raleigh.

In the months after Lane's group settled on Roanoke, conflict arose between the settlers and the natives. To quell the threat he helped create, Lane imprisoned Menatonon, king of Chawanook--also known as Chowanoke and Chowan--despite the fact that “(Chawanook) it selfe is the greatest Province of the region." He later released Menatonon for ransom, but kept the king’s son.

Hostilities continued. Then, as Lane reports, “Ensenore…being the onely friend to our nation that we had amongst them….died the 20 of April 1586.”

Having lost his strong and sole supporter, Lane and his group found themselves starving and in danger of attack. When a clash between one of Lane’s men and two natives resulted in the natives’ death, “(they) tooke themselves to their bowes, and we to our armes: some three or foure of them at the first were slaine with our shot.”

Another skirmish ensured, ending in more deaths. Days later, while Lane’s group was on high alert, Sir Frances Drake arrived and offered to resupply the colony. Lane instead opted to travel back to England, leaving behind him blood and bitter memories of European settlers.

The following year, Raleigh’s third expedition (and his second attempt to colonize the New World), led by John White, settled on Roanoke Island. White eventually traveled back to England for supplies, and the remaining colonists, including the first English child born in the New World, was never seen again. Victims, perhaps, of foolish choices regarding natives already hostile after their first encounter with Englishmen.

Glimpses of the Past

If you're interested in learning more about early North Carolina, several explorers have written detailed and often engaging accounts of their journeys through the Carolinas and America's "Cradle of the Colonies." Journals include: