A dusty road lined with massive, shady oaks, heavy with moss. On the right, horses graze in a grassy field. On the left, eight small, brick houses, emptied by war and emancipation. 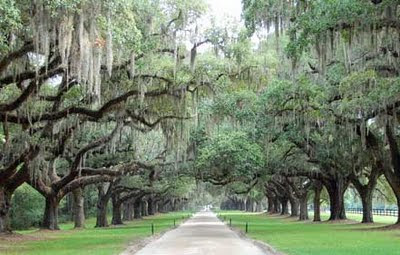 This is the first glimpse visitors have of Boone Hall Plantation, one of America's "oldest, working plantations", and a piece of Charleston's history.

Though Boone Hall is a favorite destinations for those visiting Charleston, this was our first look at the famous Avenue of Oaks and the plantation grounds that date back to the late 1600s.

At the time of this writing, the admission fee is just under $20 per adult, but our AAA membership lowered the amount by 10%. The admission granted entrance and covered a variety of tours and a discount on a scrumptious lunch made, in part, with produce grown on the plantation.

After reserving a spot on the tour of the house, we took a motorized coach ride around the grounds. There we learned the plantation was once far larger than it is now, that it produced indigo, rice, then bricks, which were used in buildings in Charleston. At some point, pecan trees were planted, and those not ravaged by time or hurricanes produce pecans to this day.

In addition to the old pecan grove, we saw the stables and the old cotton gin. Passed woods that were once crop land; fields of corn that, in the autumn will become a corn maze; ponds, and marshlands. 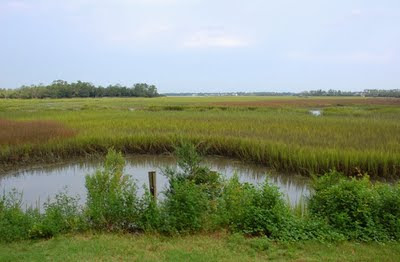 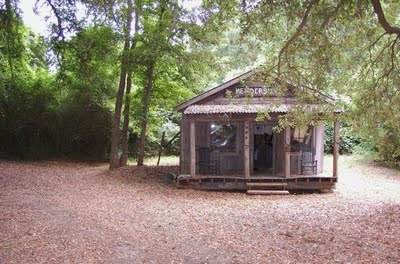 As it turns out, Boone Hall Plantation is the backdrop for several television shows and movies, and the house was used in Nicholas Spark's movie version of The Notebook. 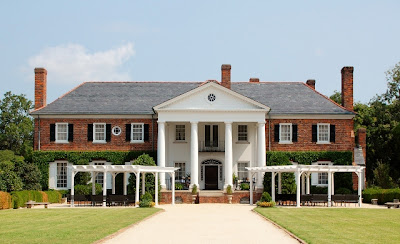 After the coach tour, we gathered on the porch of that house with other guests and took our scheduled tour. We were immediately surprised to learn it had been built in 1936, replacing an old farmhouse that existed during the war.

Afterwards, we walked down "Slave Street", the row of cabins that were once home to the plantation's slaves. At the time of our visit, each cabin displayed different aspects of slavery, from work and life, to emancipation and civil rights. At one end of the "street" visitors can listen to a History Talk on slave life, and at the other, they can sit in the shade and watch a performance at the Gullah Theater.

As tragic as slavery was (and still is, since human trafficking, as it's now called, still exists despite the lessons of the past) it is history. Our history. And it can't be denied or ignored. I'm grateful that places such as Boone Hall Plantation and the old Slave Mart in downtown Charleston take pains to share that reality and celebrate the Gullah culture that so influences the Lowcountry. But I was dismayed and saddened that while touring Slave Street, both my husband and I were greeted with open hostility by visitors of that culture. One teenager girl, while glaring at me, even commented on the presence of a "white person". And what should have been an opportunity for enlightenment became a source of division. I don't know if ours was a typical encounter, I've not spoken to others who have visited the cabins, but because of it, we'll likely avoid this part of the tour in the future.

After several hours of soaking in this Lowcountry destination, we took advantage of our discount at the nearby Boone Hall Farms Market Cafe, where we enjoyed a lunch that tasted even better than it looked, and stocked up on our favorite Charleston tea.

Despite our encounter at the cabins, it's easy to see why Boone Hall Plantation is high on the list of places to visit while in the Lowcountry. Some tours are seasonal or contingent on weather, so for more information on Boone Hall, including special events such as the Taste of Charleston, Scottish Games, the Pumpkin Patch, the Oyster Festival, and much more, go to  http://boonehallplantation.com/

Very interesting and informative. A hike through a plantation so rich in history would be an incredible experience. Very much different from our Sedona hikes or backpacking trips. A plantation trip like this one would not only get us in touch with nature but all the more with history. Thanks for this post.

Thanks, Sedona! We've found there's much to learn in the Carolinas, whether hiking through the mountains or through her history. Enjoy your hikes in Sedona for us. It's beautiful country!