The main goal of our recent trip to Charleston was to visit Boone Hall Plantation. But while in the Lowcountry, I took the opportunity to do a little bit of novel research. And to do that, we went into Charleston's Historic District to tour the Provost Dungeon and old Exchange.

It would be a short, easy tour. Just confirm a couple of points of my research and then find some Lowcountry cuisine.

We parked behind the building--or perhaps it was the front. What is now the rear of the building once faced the marinas along the Cooper River, and the ships involved in trade. After walking around to the entrance on Broad Street, we climbed one side of the split staircase and went inside.

Once there, I received a bit of a research jolt. Since revolutionary and local planter Isaac Haynes had been hung by the British on the grounds in 1781, I'd hoped all hangings had been performed on the premises. As it turns out, this building, completed in 1771, was used as an exchange and customs house, and the low, arched-ceiling ground floor as a prison only during the British occupation. While the information put a snag in my research, it also threw me into the 1770s, and the American colonists' fight for independence, for as I soon learned*:
There's more. So much, I'm on information overload every time I research the Exchange. We've passed this building numerous times during visits to Charleston, never knowing we were passing a huge chunk of South Carolina's, and America's, history.

More research for later. But for now, I had another reason for touring the dungeon on this trip. I had to see the wall.

During her early days of settlement, Charleston, then called Charles Town, was surrounded by a protective brick wall. The east bordered the Cooper River. The west, what's now known as Meeting Street, and the city stretched several blocks north and south of Broad Street. Maps of the original walled portion of the city hung in the dungeon. Click each photo to see a larger version.


In the center of the wall along the river's edge, a portion of the wall ballooned into the water. This "half-moon battery" is the present-day location of the Exchange and Provost dungeon. Thanks to archeology and preservation efforts, a section of the wall is visible inside the dungeon. 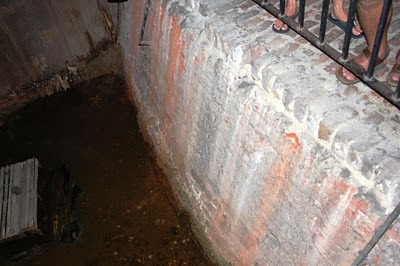 As amazing as it is in a photo, I was more amazed to stand on a catwalk over dank water, in a room where America's revolutionaries had been imprisoned in their fight for freedom, and stare down at the wall built by Charleston's founders. If you have the opportunity to visit Charleston, I highly recommend a tour of this historic site.

More more information on the Exchange and Provost Dungeon, go to:
*www.ccpl.org/content.asp?action=detail&catID=6055&id=15796&parentID=5750

If you're wondering if I eventually learned where criminals were hung, I did, thanks to our dungeon tour guide. Executions were performed on a gallows at the Old City Jail. The castle-like structure is the most ominous building I've seen in Charleston, and the perfect setting for the fictional hanging that occurs in my story: 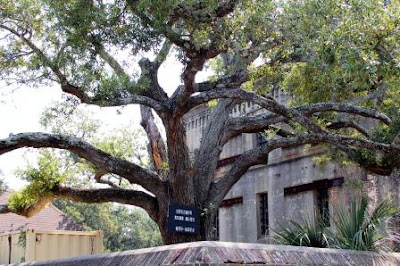 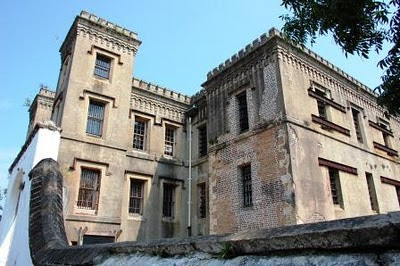 It's currently closed to the public, but at the moment, visitors can tour the interior during one company's ghost tour. Next time.
Posted by Kimberli
Email ThisBlogThis!Share to TwitterShare to FacebookShare to Pinterest
Labels: Charleston, History, Old City Jail, Old Exchange, Provost Dungeon, SC Lowcountry