A clear cool day at the start of autumn inspired us to take a long drive, so we hopped over to Bath, NC for a few hours. Some may remember Bath was the first town in North Carolina, and home to surveyor John Lawson and later, Blackbeard. It's also the setting for my story Saints & Sinners, which took second place in the short story category at this year's Blue Ridge Mountain Christian Writers Conference. But that's not why we're fond of the place.

Little has changed in the four years since our last visit. The streets are still tidy, the houses charming. St. Thomas Church still draws visitors to its sanctuary, and the waters of Bath Creek, off the Pamlico Sound, are still inviting. It's a quiet, picturesque stop for those in the area. 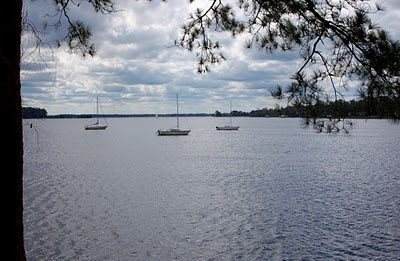 While there, we visited the Pirate's Treasure, a small gift shop located a couple houses down from Blackbeard's historical marker. The shop was closed during our last visit, so with a welcome hanging on the door, we went inside.

I usually don't mention stores in my posts, but Mrs. Anderson's warmth and friendliness, not to mention the adorable handcrafted ornaments she sold, are reminiscent of Mount Airy's Mayberry, and harder to find than the penguin gourds displayed on one of her shelves. If you have an opportunity to stop by, so do, and check out the Christmas room. You won't believe what she did with a handful of prickly sweet-gum seeds.

After a short walk around St. Thomas Church, we took the Bayview Ferry across the Pamlico River toward Aurora, famous for its fossils. While it doesn't sound exciting, I once happened on a 2006 survey of the region, and was surprised by the species found imprinted there:


(The area) contain one of the largest known concentrations of marine vertebrate fossils in the world. Among the more prominent vertebrate fossil assemblages found at the site are sharks, fish, sea and terrestrial birds, baleen and toothed whales, walrus, and true seals.

How mining for phosphates—a process visible near the Aurora terminal—has affected the fossil collection, I don't know. I'll have to ask when I visit the museum in Aurora.

During the relaxing, thirty-minute ferry ride, we noticed a hint of red in the trees lining the bank of the river.

It won't be long until fall color is in full bloom. When it is, we'll be meandering around the Carolinas, enjoying as much of it as we can.
Posted by Kimberli
Email ThisBlogThis!Share to TwitterShare to FacebookShare to Pinterest
Labels: Aurora, Bath, Coastal NC, Fossils