I'm annoyed with myself. Just over two years ago, I began reading about longleaf pine savannas after Kelvin Taylor, co-moderator of CarolinasAdventures and creator of ScenicNC.com, introduced us to this natural community during excursions to Howell Woods and Green Swamp. Since I was new to eastern North Carolina, and eager to learn about the variety of natural communities that exists on this side of the state, I intended to cover the subject in a blog post. I even sent Kelvin a list of questions to that end.

After a bit of effective procrastinating, I forgot about it.

A recent visit to Peachtree Rock Heritage Preserve in South Carolina reminded me of the subject. There, as at Howell Woods and so many other preserves, longleaf pine savannas are painstakingly being restored with the help of dedicated people and...fire?

Yep, fire. I grew up believing forests and fires are a bad combination, so I needed some convincing.

Fortunately, my questions and Kelvin's answers languished at the bottom of my inbox. After blowing off the dust that built up over the past two years, I pasted them below. Unfortunately, one reference is outdated, but the question still applies.

To start, what is a longleaf pine savanna? 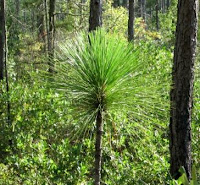 Savanna:
A flat grassland of tropical or subtropical regions.

So we can define a longleaf pine savanna as a flat grassland in which the dominant tree species is Pinus palutris. As with other forest ecosystems, there are regions or zones. When looking at a pineland savanna you see pines widely spaced over the landscape with an understory of other vegetation both woody and herbaceous. In NC, the dominant understory plant would be wiregrass. 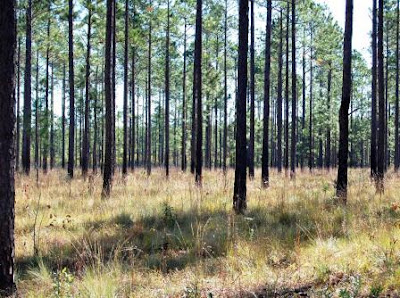 What are the benefits of a longleaf pine savanna?

The savannas are unique habitats that prove homes for both plants like the venus flyptrap that do not survive in more woody (shady) conditions. Also the pine trees are home for nesting birds like the red-cockaded woodpecker and the eastern bluebird.

Who owns the savannas located in North Carolina, and what department oversees and protects those on public land?

Where are longleaf pine savannas located?

The natural range of longleaf pine extends from southeastern Virginia to east Texas in a belt approximately 150 miles wide adjacent to the coasts of the Atlantic Ocean and the Gulf of Mexico. It dips as far south as central Florida and widens northward into west central Georgia and east central Alabama.

According to the Carolinas Environmental Diversity Explorations website, 93% of the decline has occurred since pre-colonial days. Why?

Virtually all of the acreage is second growth, degraded by logging, turpentining, grazing, and disruption of the natural fire regime. Longleaf forests have been partly or wholly replaced on many of original longleaf sites by other pines and hardwoods due to suppression of fire and establishment of loblolly and slash pine plantations.

Development, highway construction, timber cutting, and drainage of surrounding land that effects the watertable also contributes to the decline.

How many longleaf pine savannas exist in North Carolina today?

I don’t have an answer. I know the acres number in the thousands.

Explain the role of fire in the survival of longleaf pine savannas.

Fire helps remove the hardwood trees and understory shrubs. Without fire, hardwood saplings would compete with the pines, shading out the grasses and other herbaceous plants in the savanna. Succession of a savanna absent fire is a shrubby pocosin.

How often should these savannas undergo a burning?

Under natural conditions this can occur every year or so. Sometime several times a year. Fire suppression has severely limited these necessary events.

Who performs these burnings?

On Nature Conservancy preserves, it’s done by members. On state or federal lands, the Forest Service is responsible.

From the Environmental Diversity website, I learned Camp Lejeune plays an important role of one longleaf pine savanna. What is that?

I think they manage a savanna on the military base by doing burns. 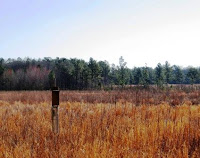 Howell Woods in Johnston County is an example of one longleaf pine savanna that is being restored to its natural state. Why restore it when burnings could possibly destroy plants and wildlife that have since made Howell Woods its home?

Most of the plants have adapted to burnings. Grasses for example, have deep root systems, which regenerate the leaves after a burn. The plants that belong in a longleaf pine savanna will return after a fire, so burns don’t really destroy the native species.

An article in the March (2008) issue of Our State Magazine states the Natural Heritage Preserve is in the process of inventorying plants and animals in natural communities throughout the state. This may present a conflict if endangered species are found in savannas scheduled to be restored. If this occurs, which will take precedent: the existing endangered species or the endangered habitat that plays host to endangered species?

This would not be an easy situation to solve. However, if a rare species is found in a restoration area, the protection of the species would supersede any changes to that particular ecosystem.

To learn more about longleaf pine savannas, go to www.learnnc.org/lp/editions/cede_longleaf/488

Also, consider reading Looking for Longleaf: The Rise and Fall of an American Forest by Lawrence S. Earley. Click on the Amazon link with confidence. I'm not set up to receive referral fees.

For a look at a recent prescribed burn, as they're called, check out these photos taken at the Fires of the Lakes festival at Boiling Springs Lake:

My dad and I used to hike in some of patches of savannas in Georgia. They were foremost in my mind when I wrote THE FLOCK.