During a recent trip to Columbia, SC, we found ourselves with enough time to explore Peachtree Rock Heritage Preserve, a Nature Conservancy (SC Chapter) project just over thirty miles outside the city. As I mentioned in a previous post, if a conservancy acquires a tract of land, there's a good reason for it, so they're worth checking out.

The prized object of this conservancy is something that borders on comical, begging the question, How did it happen? But as we discovered, there's more to see at Peachtree.

Following the directions listed on two websites, we found the preserve without any difficulty. After parking in the small, dirt lot located at the trailhead, we grabbed our camera and headed down the sandy trail. 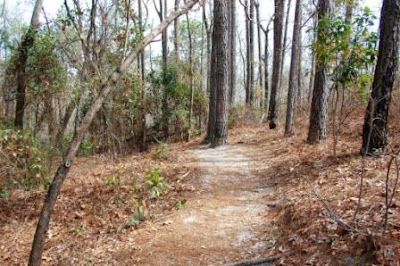 We walked through the woods, avoiding the usual trail hazards such as roots and rocks in the ground. About a quarter mile into the trail (purely guessing here), we reached a T-Junction. To our right, the trail extended past a sandstone ledge hanging several feet above the path. According to the South Carolina Department of Natural Resources, Peachtree Preserve has the largest sandstone outcroppings in the state.1

We turned left, and a couple tenths of a mile later, we reached our goal. While we stared at the curious formation, a sound caught our attention, and we followed the trail to the end and found something we hadn't known to look for. 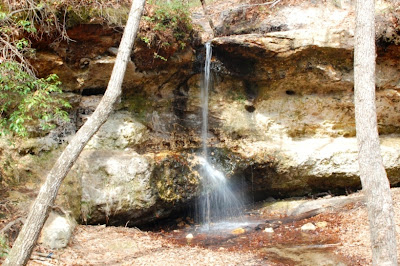 A waterfall. The only one in the coastal plains. As I understand it, at the time of this writing, the state is experiencing drought conditions, so I don't know if the thin stream of water we saw flowing over the ten-ish foot ledge is normal, but it made the landscape even more scenic. We walked to the falls on dry ground, and stood close enough to feel the mist spraying off the rocks. 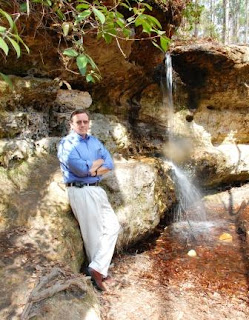 Okay, by now you must be wondering about the curious formation that brought us to Peachtree Rock Preserve, and why I've yet to show a photo. Here's why. 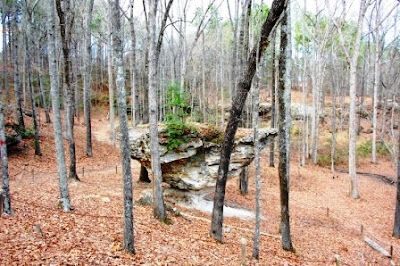 That's right. It's a giant inverted triangular rock. With a tree perched on top. 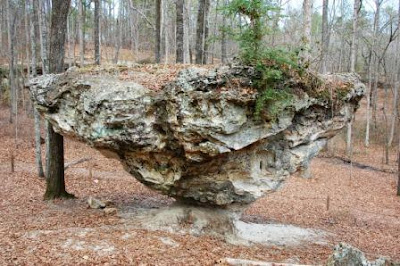 Lest anyone get the wrong impression, I think it's great. It's an incredibly unique, peculiar formation. One that should be viewed in person to appreciate the size and mass resting on that rounded point.

I was curious both about the shape and why the sandy landscape had rock ledges in the first place. According to the Conservancy's website, the softer, sandier material at the bottom of the rock eroded faster than the sandstone above it. I assume the entire area is a result of erosion. Take a closer look at the rock near the waterfall: 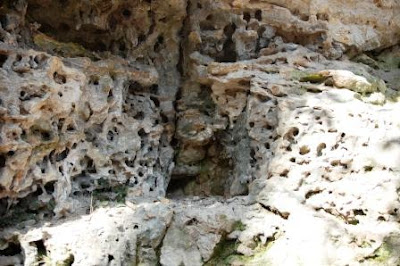 But interesting rock formations and a pleasant little waterfall aren't the only attractions at the preserve. As I later learned, according to the Nature Conservancy's website, we missed several natural communities:


The area harbors a swamp tupelo-evergreen shrub bog and a longleaf pine ecosystem.  Typical sandhill scrub vegetation, pines, turkey oaks and sparkleberry bushes are present in abundance on the preserve.  The federally endangered Rayner's blueberry is found growing on the seepage slope within the longleaf pine forest.2 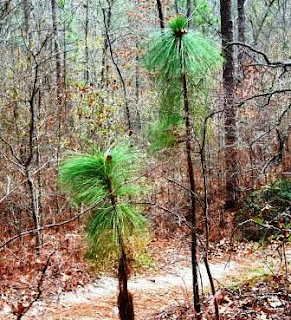 I'm sorely behind on the subject of longleaf pines, but intend to cover it in an upcoming post.

I don't believe that's a peach tree on top of the rock. It looks more like a pine tree. The rock was so named because it's shaped like a peach tree itself.

I was privileged to hike this area a couple of years ago with Dr. John Nelson, who is director of the SC State Herbarium. I'm not a plant expert by any means, but it was great having him along to identify plants in this area.

Thanks, Tom. Oops, yep, that was a mistake. According to the SCDNR page, it's the only waterfall in the coastal plain. I'll fix that.

I don't believe it's a peach tree atop the rock either. I wasn't sure what it was. Besides amusing. From one angle, it looked like a feather perched in a hat.

What a treat it must have been to hike Peachtree with the director of the Herbarium! We kept our eyes out for emerging flowers, but I had no idea how much we missed until later.

Thanks, Kimberli. I always enjoy your site.

Yeah, it was great visiting Peach Tree Rock with John. He's a good friend, and we go on several kayaking trips around the state, as well. He always keeps a plant press strapped to the front of his kayak.

As for the rock itself, I was dismayed with the amount of graffiti on it. When we were there, a family had jumped the little barrier and had climbed on top of the rock. Still, it's a very, very cool place with some unique landforms.

I totally agree with you, and to reflect that, I modified my report when I made that correction (I seriously did not know that area is considered the coastal plains, and I'm still wondering how. I plan to check my resources when we get home.)

Thanks for the kind words and encouragement!

Classic erosion formation similar on a smaller scale to what occurs when there's a monadnock like Crowders Mountain or Pilot Mountain, etc.

My brother-in-law was recently invited to a private hunting preserve on the coastal plane. While there, he saw what he describes as "a 100-foot tall boulder" made of granite. He asked the owners if he could bring me there to photograph this bizarre feature stuck in the middle of the coastal plain but was informed that no one would be allowed to photograph it. They don't want the attention knowledge of this thing would bring to their place.

Hi Bob! We thought of you last week. While hiking, we encountered a bunch of hemlocks. Alive and healthy a quick glance seemed to confirm. At Panthertown? I'll have to check my photos.

So true about the erosion. It reminded me of Pilot and Medoc Mountains, but how odd those two are more rounded and this jagged on top and thin at the feet. I'm curious as to why the softer soil lay beneath.

Very interesting about the boulder on the coast. Is it visible on Google Earth? Or do trees or shrubs block the view? That's a neat find waiting to happen.

I hope you've been enjoying time on the trails. Have a great spring!

Great blog post. That rock is very curious! Great pictures. Thanks for sharing!

Isn't that rock hilarious? And naturally formed. Peachtree Rock Preserve makes for a great little hike if you're in the Columbia area. I'm glad we stopped by!