Sunny with a high in the mid 80s. After a long winter, we couldn't waste a day like that indoors, so we slipped on our hiking shoes and headed outside.

But where to go?

Before we left, I'd grabbed my copy of 100 Classic Hikes in North Carolina, which I'd purchased last year and had yet to use. As my husband drove to Bojangles for my beloved iced tea, I flipped to the index and read each entry under the Coast Trails, Piedmont, and More Piedmont Trails headings. One caught my eye, and after reading the description, we were on our way to the Franklin County Nature Preserve of the De Hart Botanical Gardens.

Located on Hwy 401, about 4.7 miles north of Hwy 98 in Franklin County, the  eighty-eight acre preserve is home to a rare flower and crane-fly orchids, thanks to its unique location along NC's Fall zone. Signs at the trailhead state the land is private, but open to the public provided they follow the rules. The first is to sign in at a picturesque gazebo. A gracious deal no matter how you look at it, so after signing in, we collected a map from the brochure box and headed down the first of many trails.

The park is separated into two sections. Each section has 1.8 miles of hiking trails and different, but really cool features. We started out at Section B: the Waterfall Loop.

Yes, a waterfall! After hiking over a bridge and past boulders and rock outcroppings (more on that in a minute), we made our way around a switchback and faced a small waterfall. It may have been far shorter than Looking Glass or Schoolhouse Falls, but it was still a waterfall, and it's located in eastern NC. 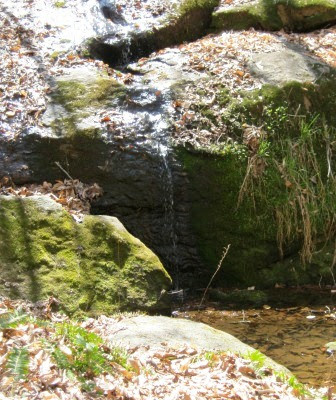 We continued on, taking a short sidetrail to see—according to 100 Hikes—the remnants of the old Timberlake homestead. I have no information on the family, though I'd love to know more about them. Beyond some scrap metal and a large hole in the ground, we saw only the peaceful outdoors, the beginnings of a large spread of daffodils, and two of the biggest trees we've seen outside of Congaree Swamp in South Carolina. Definitely worth the short detour, especially when the daffodils are in bloom (which they were not during our visit). 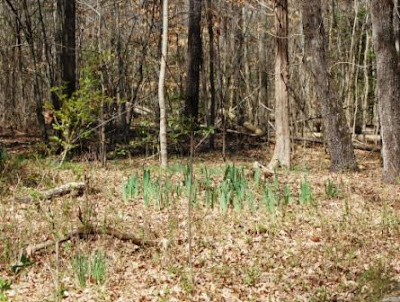 What a colorful touch to add to a farm then so far from civilization. And what a wonderful gift left behind for the rest of us.

After touring the grounds, we picked up the original trail, at times following a creek, once passing a pond, until we looped back to the the trailhead. From there, we crossed the parking lot to Section A.

The loop trail in this section consists of several trails. The first, the Rock Trail. As I mentioned, the botanical gardens is located on the Fall Zone and, as at Rocky Mount and Raven Rock State Park, large boulders left behind from erosion are visible throughout the preserve, which increases the challenge of the hikes at times. 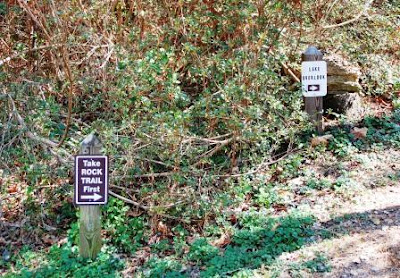 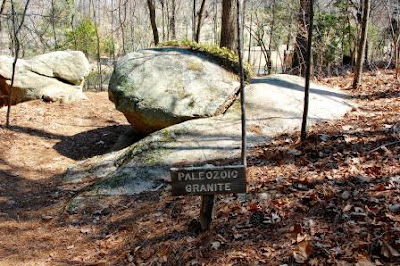 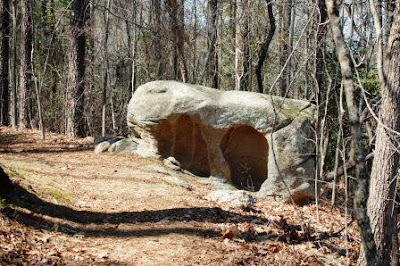 Near the end of the Rock Trail, we reached a small observation deck overlooking a scenic lake. This is a great place to stop, rest, and take pictures. 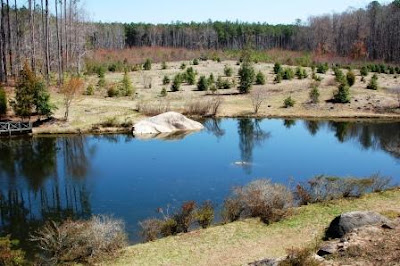 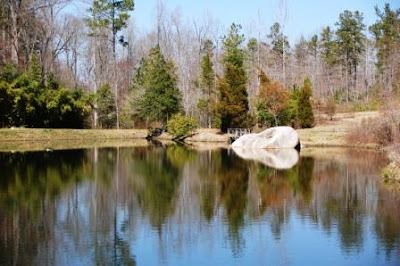 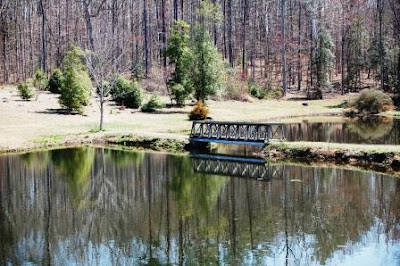 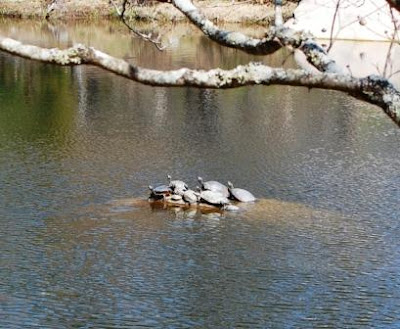 Honey, you didn't tell me we were having company!
After doing all of the above, we continued on and found a marker for the wildpink, a flower that, according to several sources, grows only along the granite-rich area of the Fall Zone. Since spring was just awakening at the time of our visit, the little darling was still catching up on her beauty sleep. We're planning to return in April in the hopes of catching it in bloom. 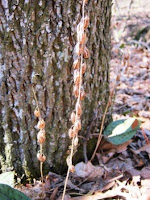 But we had more to see, so we strolled along the banks of the lake and crossed the bridge, and there we found the Crane Fly Trail. According to James Fowler's Wild Orchids of South Carolina, the Crane fly blooms from mid-July to mid-August. We spotted one once, in Pisgah National Forest, located in western NC, and had no idea they grew on this side of the state. They do. We found the leaves and seed pods. What a delight it will be to see them at peak.

According to 100 Hikes, in addition to Crane-fly orchids and wildpinks, the preserve is home to a variety of trees, azaleas, and mint. Mint? Not much was blooming during our March visit though, but we did spot some bluets, violets, and phlox. 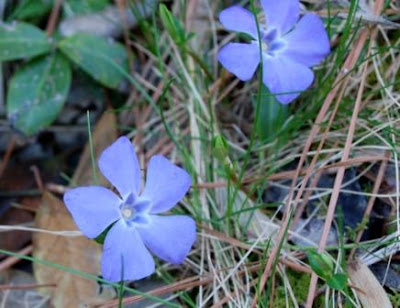 All this hidden in what others would call the middle of nowhere. The Carolinas do love their secrets.

During this particular hike, I had a chest cold. Roughly three miles of hiking was all I could take, so we missed exploring the Bench Loop and the Children's Bamboo Loop. Next time.

On another note, don't forget to take precautions against ticks when walking in the woods in eastern NC. Though just mid-March, one hitched a ride home with us.

Our thanks to the owners of the De Hart Botanical Gardens for graciously opening the grounds to the public, and allowing us to enjoy the wonders there.
Posted by Kimberli
Email ThisBlogThis!Share to TwitterShare to FacebookShare to Pinterest
Labels: botanical gardens, De Hart Botanical, ENC Hiking Trails, Franklin Co (NC), Piedmont

Wonderful post and wonderful pictures. We love Dehart and you did a great job of "selling" it! :)

Thanks! It's a great place. We plan on returning soon!