Charming one-room houses with piazzas overlooking lush courtyards. Churches with columns, pediments, and soaring steeples. Buildings drenched with history. All and more were on our mind when we traveled to South Carolina's Lowcountry for a self-guided tour of Charleston.

Friend and new author Shannon McNear accompanied us on the excursion. Shannon not only sets her stories in the Lowcountry, she steeps herself in historical research, going as far as visiting archeological sites to get a sense of the layout. She also holds what artifacts she's permitted to handle to feel the weight and texture of the material. Her knowledge and resources enhanced our tour, as did her sparking personality and sense of humor.

Using Shannon's worn pamphlet, we began our tour at the open-air market on Market Street. Built around 1841, the market is filled with vendors selling hats, duplications of historical prints, famous "Sweetgrass" baskets and more. After purchasing a few items, we walked down Church Street to the first stop on our list, St Philip's.

A national landmark, St Philip's dates back to 1681. It's a favorite for Church historians and those photographing quintessential Charleston. On this occasion, our goal wasn't the building itself, but the cemetery on its grounds and across the street. Charleston's cemeteries are history books. One doesn't have to walk far to see the names Alston, Pringle, Pinckney and others who did much to shape Charleston, and South Carolina's history.

Though one does need to search for headstones in places they wouldn't think to look. We found markers embedded in sidewalks and running alongside the walls. 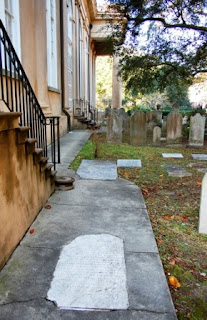 Across the street from the church, adjacent to the auxiliary cemetery, I spotted something we'd missed on earlier visits. A sign on a tall, black wrought-iron gate that read "Pirates Courtyard". A shadowed walkway so narrow, two could not walk down it side-by-side led to a grassy area barely visible behind the building. But was it public or private? That question kept us from stepping foot on the pirates' rest. I've yet to find an explanation on the web. However, this spot is listed on at least one ghost tour, so we'll check it out during our next visit.

For information on the history of St. Philip's, go to www.nps.gov/history/nr/travel/charleston/stp.htm

We continued our tour of churches and cemeteries, houses and alleys, inspecting the interior of St. Michael's and the Huguenot church. The exterior of tenement houses built in the 1600s. The restaurant on Unity Alley where George Washington ate during his visit to the Lowcountry. The oldest homes in the city, noting stucco covering brick in some places, and where visible, the straight mortar between bricks that seemed to be too small for their slots.

At lunchtime, we stopped at Carolina's Bistro where we discussed history and storyline while dining on Cauliflower soup, truffle fries and pasta. Refreshed, we took up our tour again, and were soon reminded history is on every corner of Charleston, even in the people we encountered in the streets.

On our way back to Market Street, we met a man doing repair work on one of Charleston's historic churches. He took time to explain why the mortar joints of many homes and brick fences looked so straight (leveled with a razor) and that stucco covered some walls because the soft, oyster-shell-and-limestone bricks slowly disintegrate in the Lowcountry climate. A beneficial stop not mentioned in the tour book. Minutes later, we happened on another vendor selling the famous Sweetgrass baskets. Just one of many ties that bind Charleston's history to the present. 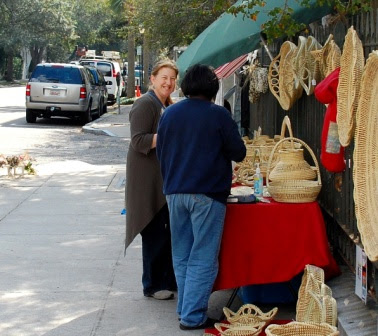 Shannon chats with a basket maker

For those unfamiliar, this particular art of basketweaving originated in African. The descendants of slaves who brought the art with them continue the tradition, selling them in the market, streets, or booths along Highway 17 as previous generations had, though many now sell their baskets online. The pricetag often shocks tourists, but the process is time consuming, often taking twelve to twenty-four hours depending on the size of the basket, and all baskets are handmade. It's interesting to note that a former missionary I once worked with gave me a basket she'd purchased in Uganda. It is worked exactly as some of the baskets Charleston weavers make today.

For more information on the history and cultural importance of these baskets, click here for an abstract. I also recommend Mary Alice Monroe's novel, Sweetgrass.

Hours after beginning our tour, we said goodbye to Shannon and headed up Highway 17, taking a quick detour at the Waterfront Park near Patriot's Point for a shot of the Ravenel Bridge. 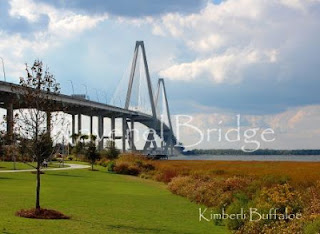 But we weren't finished yet. When traveling between Charleston and Myrtle Beach, we love to stop at two jewels in the Lowcountry's crown: Pawleys Island and Murrells Inlet. Off season is a great time to visit "The Hammock Coast". Hotel prices are lower, camping spots more likely to be available, and more sand is visible on the beach. Though it appears bars have more of a presence in Murrells Inlet than they had in previous visits, Huntington Beach State Park, Brookgreen Gardens, the Marshwalk and your choice of seafood restaurants makes Murells Inlet worth the stop.
Note: if you're on a budget, check out the restaurant's menu before walking inside. On a recommendation, we ate at Lee's Inlet Kitchen. The food is great, and their hush puppies addicting, but at this writing, entrees range from $17.95 to $36.95.

A final note: We usually avoid Myrtle Beach. I prefer trail getaways to crowds and traffic. But since it is low season, we decided to explore on this occasion, and I found I'd been suffering from a case of not seeing the forest for the kitschy trees. In addition to numerous accesses to long stretches of sandy beach, Myrtle Beach is home to a lovely state park. It's now on our To-Do list. For more information, go to South Carolina's Myrtle Beach State Park site.

My husband and I moved to the region this summer. We try to get out hiking and exploring every free weekend, so your blog is a great find! Thanks for all the great information and reviews you post - I'll definitely continue reading in the future.

Congratulations on moving to the Lowcountry! You're in a great position to explore not only islands and waterways, historic towns and great restaurants, as you've no doubt discovered, you're within driving distance of Savannah and the Blue Ridge Mountains!

Thanks for your kind words about my blog. I love the Carolinas, and love sharing the beauty found on and off the beaten path.

I get a kick out of Charleston! The last time Carole and I were there we walked past that church in your blog. And got photos of the cemetery, to boot.

Having grown up in the low country of Georgia, I'm not generally a big fan of that area and terrain. However, I do enjoy each and every visit to Charleston.

Thanks, Bob. I know what you mean. For us, a trip to Charleston is a treat. A beautiful place!