Our first stop of the day took us to Mt. Mitchell, the highest point in the east. The second, the deepest gorge in the east. And they're approximately forty-three miles apart along the Blue Ridge Parkway.

I've heard and read much about Linville Gorge and Falls. Members of my hiking group have ventured into the gorge and returned with exciting stories of strenuous hikes and photos of a vast, rugged wilderness—and, on occasion, an isolated field of daffodils. I shied away from the idea of navigating craggy rocks and steep cliffs but was equally curious about those formations, so different from the surrounding landscape. It's one of the reasons I purchased Exploring the Geology of the Carolinas (Steward and Robertson, UNC Press.) From the chapter on Linville Gorge, I learned the rocks in and around the falls are a spectacular example of a "tectonic window". A cross-section of a significant geologic event. No digging required!

More on that in a minute. As it turns out, there are several short (in hiker terms) stops along a trail that allow visitors to view Linville Falls from three different perspectives: eye level, high, and much higher. The trail difficulty is easy, difficult and tiring. After parking and making a short trip to the Visitors Center, we crossed a bridge. Following signs, we arrived at the first overview in just a few minutes. 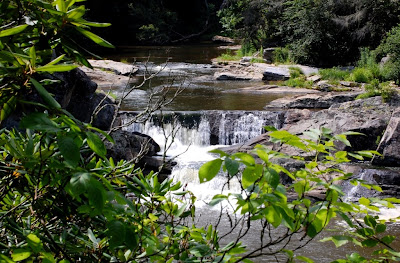 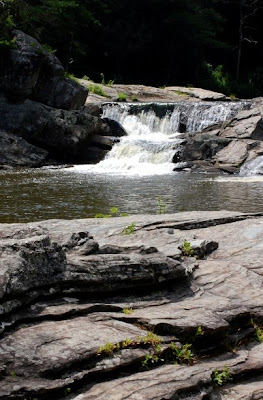 Notice the rock in the photo above, and at the "observation" platform: 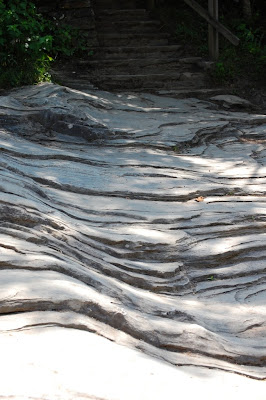 From here, the river glides through a small gorge carved by the current, much like water flows down a slide at a water park: 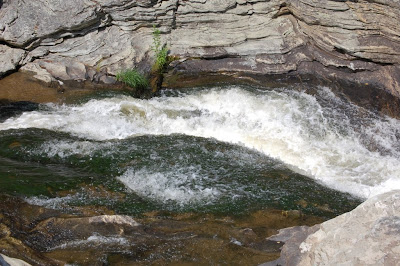 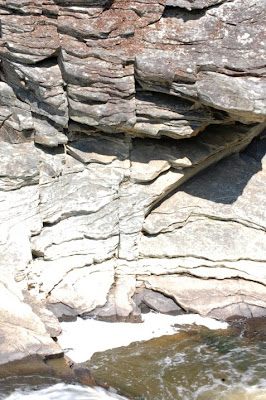 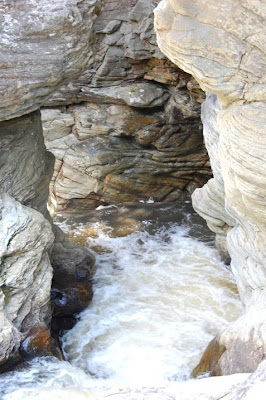 Then, the river twists and turns, and spills over yet another small cliff. We hiked along the Erwins View Trail to the Chimney View overlook, where both falls were visible: 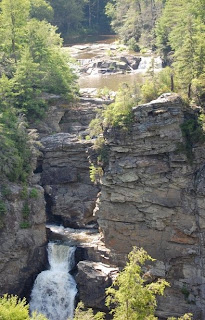 Along with a different type of rock. See the difference? 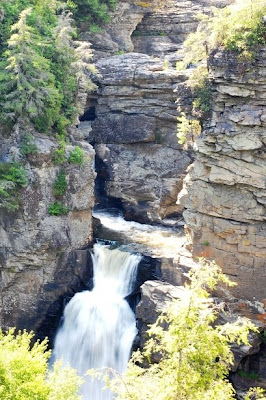 We continued on up the trail to the Gorge View Overlook, which tested my fear of heights: 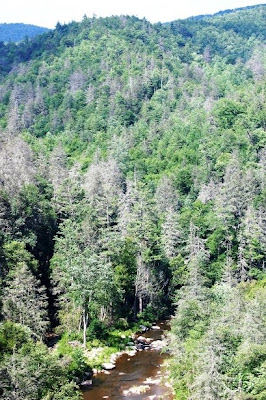 And then to the Erwins View Overlook, where I nearly ran back down the trail when a young man decided he had to take photos from the stone wall. 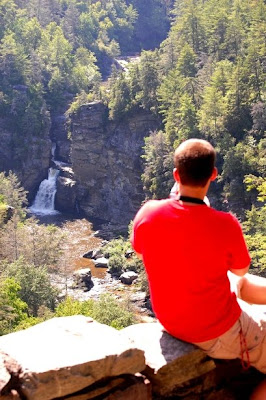 Please don't do that. There is an unobstructed view of the falls from the safer, far side of the overlook: 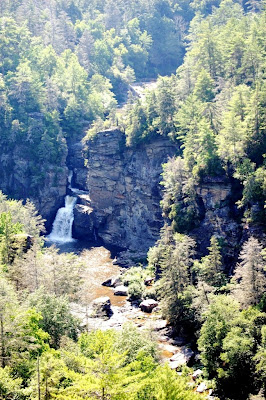 From there, we hiked back to the parking lot and the bottles of water we'd forgotten to bring along. Back at the hotel, I picked up Exploring the Geology of the Carolinas, and reviewed the chapter on Linville Falls. Had I read it in advance, I would have remembered the folded (melted looking) rock around the falls is actually older than the rock around the lower falls (photos 7 and 8). This is the result of a collision between plates.

Yes, that's right. We were looking at a fault! The authors of Exploring do a good job explaining the collision, the resulting thrust fault and the "shear zone" now visible. I highly recommend this book to those interested in the geology of the Carolinas. For more information on the Linville Fault, read the technically oriented http://web.me.com/carogeosoc/CGS/1990s_files/gb%201997.pdf or, in relation, www.unc.edu/~kgstewar/downloads/Burnsville.pdf

And for more information on Linville Falls, click on the following links:

The rock formations are amazing. I never knew about the fault. The geology is so interesting, especially the way it all changes over time. It's a beautiful work of art.

Another thing I didn't know was that there are different names for different types of waterfalls. Big duh on my part!

But that's the beauty of reading your blog. I learn something new every time I come here. Thanks so much for the information and the links. It is all so beautiful.

Thanks, Julie. This is just me learning as I go. I love to share what we experience and see. The Carolinas have so much in terms of outdoor activities and natural communities, I assume everyone will be interested in all this, lol

The rocks are fascinating. We first saw (or noticed) that particular "melted" effect during our trip to Pilot Mountain. It's like a snapshot of agony frozen in time, isn't it?

I'm not sure what you mean about the waterfalls. I have to go back and read my report!

Look at all of those dead hemlocks! It really hits home what we've lost when you look at a spot like Linville Falls.

Sad. I'm so used to the sight of dead trees in the mountains, I didn't even notice the hemlocks. Thanks for pointing it out.