During our trip to NC's High Country, we wanted to cram in as many state parks and hikes as we could during our few days there. To help us decide which and where, we brought along Kevin Adams' North Carolina Waterfalls and Best Wildflower Hikes, exploring north carolina's natural areas (not a typo, it isn't capped on the book, either) and North Carolina State Parks, A Niche Guide.

Having spent part of our time at Mt. Mitchell and Linville Falls, we looked for something near Blowing Rock, our headquarters during this trip. With its gables, rocking chairs, and flowers galore (we even spotted one growing in a crack in the sidewalk) Blowing Rock is as charming as it is trendy, so we were surprised to find a hefty little two-plus mile (round trip, longer if you hike beyond the falls) mountain hike within city limits.

I don't recommend this trail for anyone with mobility issues or small children. We had assumed the trail was named in honor of one Glen Burney, but halfway through the hike, we realized Glen was an actual glen, Webster's definition of which is a secluded narrow valley. While the secluded part only applied to the latter part of the trail—we were within city limits, and for a time, spotted houses, manholes in the path, pipes and other manmade features—narrow was right on, and steep at parts, making this a moderate-to-strenuous hike. The falls themselves can be quite dangerous as well, but more on that later.

Down we descended, down rock steps, over narrow portions of the trail, through an explosion of rhododendrons, fighting high humidity that thickened as we descended into the valley, toward not one, but three cascades: 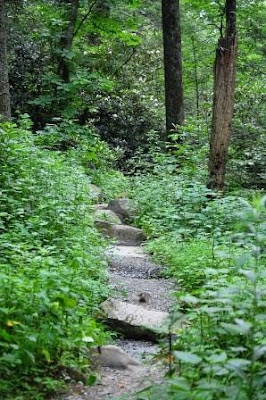 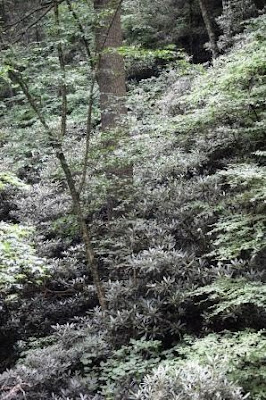 Though we took this photo on our way back up the trail, the first waterfall we passed was the Cascades: 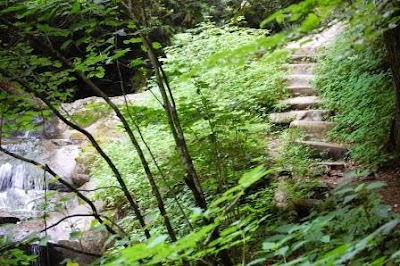 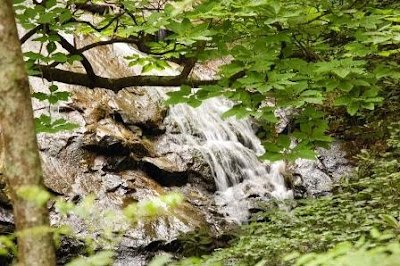 Again, we took the following photo on our way back to the trailhead. But this, as with the photos above, shows what we encountered as we hiked down the trail. 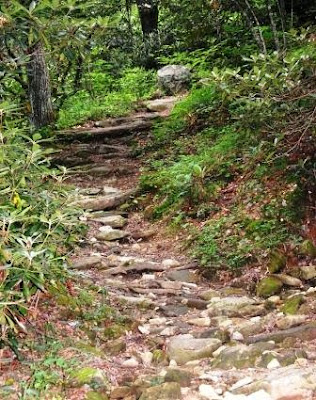 Sign for Glen Burney Falls. We splintered off the main trail and descended a bit further into the glen. 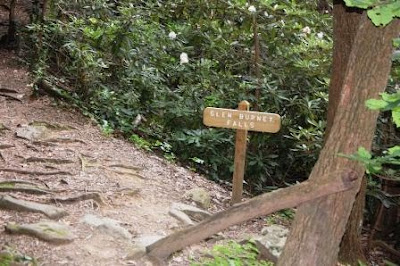 Glen Burney Falls isn't tall, but it's attractive on a small scale despite the log: 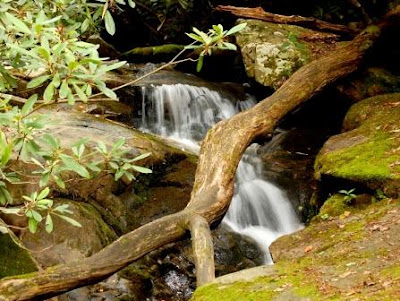 From there, we continued to Glen Marie Falls, barely visible from a side view: 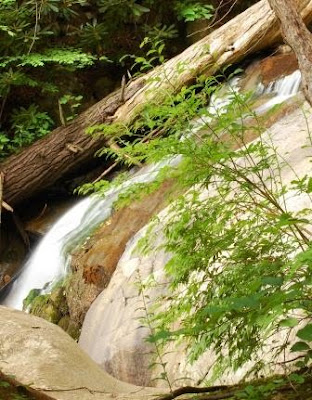 And situations like this often lead to danger. Kevin Adam includes a strong note of caution about these falls in his Glen Burney Falls entry (pg 81). There are signs at the trailhead and along the trail: 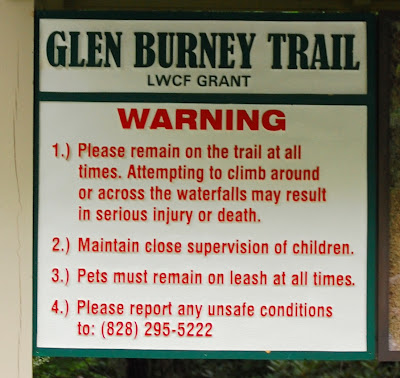 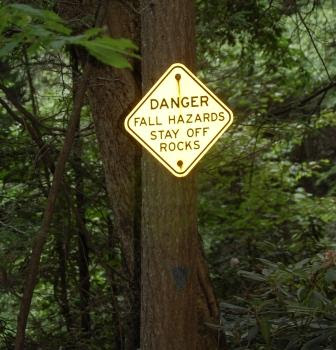 Yet despite these warnings, people are injured because of the very nature of the falls. You noticed how difficult it is to see Glen Marie. Because of that, people are tempted to walk out on the large boulder beside it for a better view. But remember, the water descends into a glen, and those rocks at the falls keep on going—straight down. 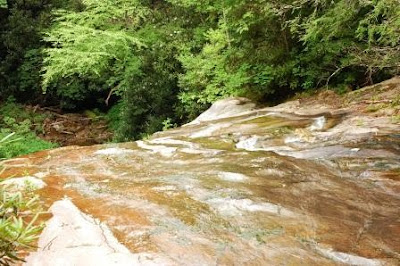 The photo above show the continuation of Glen Burney Falls. We couldn't capture the sharp, 75-foot descent onto additional boulders at Glen Marie because of vegetation.

While discussing the trail with a clerk at our hotel, she mentioned a friend of hers had been injured at one of these falls. "I don't the trail is well maintained," she said. I told her it was. The problem lies in the fact people ignore the signs. My husband, moving slow and confidently, did so and took a risk despite the warnings in an effort to take a better photo of Glen Marie. I want to keep him around for years to come, so I moved the camera far from his reach.

So please, if you hike the Glen Burney Trail, stay on the trail and off of rocks. At Glen Marie, stay behind what my husband called the "trip line" (hard to see, and just high enough to trip over).

After taking photos of the final falls and the Rattlesnake Plantain Orchids we found growing nearby, we headed back to the parking lot.

A note on the directions. According to Kevin Adam's book, to reach the trail, turn onto Laurel Lane from Main Street in downtown Blowing Rock, and drive 0.1 mile to the parking area at Annie L. Cannon Memorial Gardens. However, at what appears to be the end of Laurel Lane you'll find both a stop sign and a parking garage. This isn't your destination!

Turn right at the stop sign and then, almost immediately, turn left into the open parking lot at the Gardens. 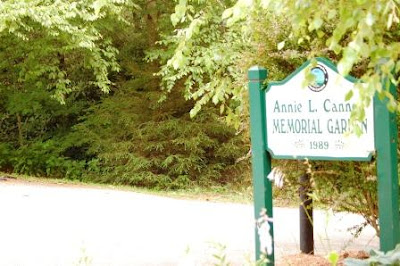 Across the street and to the left, you should see this: 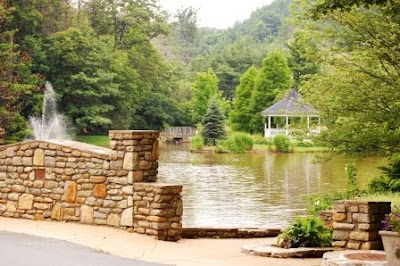 After the hike, we intended to visit Mount Jefferson State Natural Area (sometimes referred to as a state park) but the thick humidity we encountered thanks to the unusually high temps that hit the mountains that week zapped our strength. So we hit the showers, and then the stores along Main Street.

For you knitters, they have a yarn shop!

Beautiful. The pictures are awesome. I can imagine how steep, rocky and slick that must be. Again, it's a great reminder to enjoy the beauty safely.

Thanks, Julie! It's a nice trail that makes for a decent workout. Surprising since it's within city limits. I hope people will start heeding those signs. though. You should have seen those drop-offs!

The hemlocks look to be in good shape. I suppose they've been treated.

Kevin Adams mentioned the old-growth hemlocks in NC Waterfalls, and that's about all I've seen on the subject. If you saw how narrow and steep that glen is, and how forgotten it seems to be, you would wonder if anyone went through the trouble of treating those trees. Yet, there they are.