Mt. Mitchell is the highest point east of the Mississippi. Part of the Black Mountains near Asheville, NC, Mt. Mitchell soars 6,684 feet above sea level. Not as high as mountains out west, but it's lush and cool, and it's the place to go to get a near 360 degree view of the surrounding Blue Ridge Mountains.

So it was our first stop on this visit to the Blue Ridge Parkway. Now part of a state park, Mt. Mitchell is located just off the Parkway between mileposts 355 and 358. Several years ago, the park tore down the old observation tower (which I often referred to as The Tower of Terror) and built a new platform. This, and a hike down the .75 Balsam Trail, just off the pathway to the summit, was our goal.

The threat of thunderstorms storms eliminated the hike, but we headed to the summit in the hopes of finding skies clear enough for a spectacular view. We got it, but unfortunately, our camera lens is broken, so we had to take photos with the zoom lens and our camera phones. Consequently, we couldn't capture the panoramic vista visible from the top of the platform. 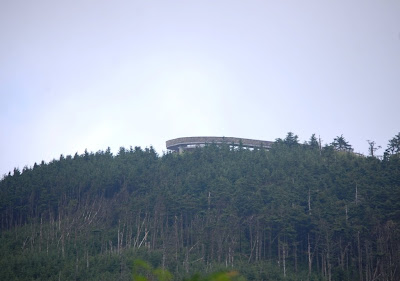 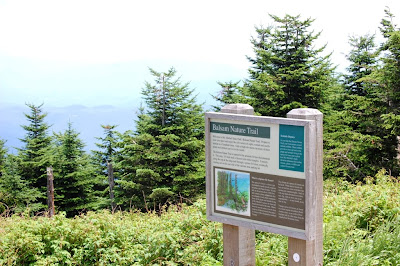 View from the paved path that leads to the summit: 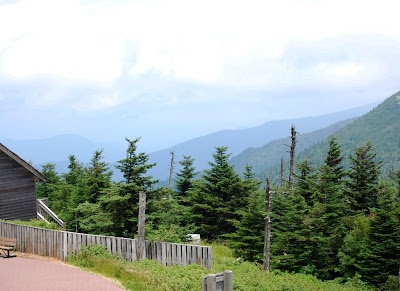 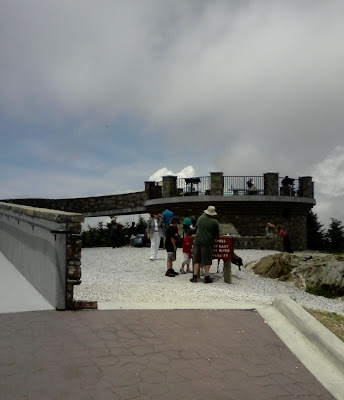 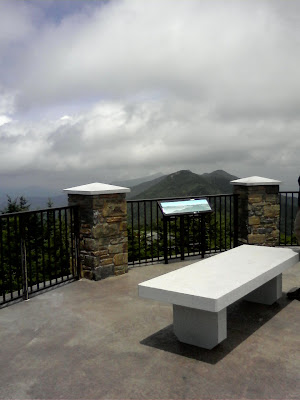 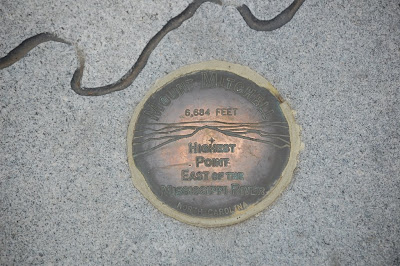 The platform is great. The view, stunning. I left with only one concern.

Mt. Mitchell is named after Rev. Elisha Mitchell, who correctly determined the mountain's standing as highest peak in the east. Shortly after, Senator Thomas Clingman claimed a nearby peak was higher. While in the mountains to confirm his measurements and put the dispute to rest, Rev. Mitchell lost his life after falling over a waterfall. (Honest. I did not make that up to emphasize last week's Waterfall Warning post!)

Rev. Mitchell is buried at the summit, beside the observation platform. A fence once protected his grave, but now, a low, stone wall filled with rocks surrounds the monument. During our visit, children sat and climbed on the wall, munching on tofu and crackers. When I voiced my concern over the change to the gravesite, they jumped up and away. They didn't have a clue.

I miss the fence. 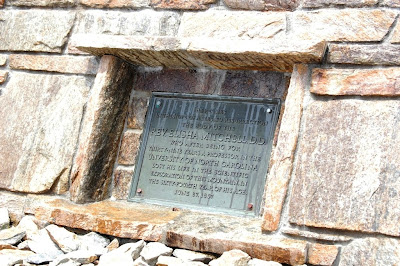 Because of the altitude and a never ending breeze, Mt. Mitchell is usually a bit chilly, so bring a jacket. If you forget one, you can purchase a jacket or sweatshirt at the Visitors Center located at the parking lot below the summit, or at the restaurant you'll pass on the way to the peak.

Either way, stop at the restaurant and try their hot peach cobbler. It's the best I've tasted, and when I mentioned that to the woman at the cash register, she smiled. As it turns out, it was her grandmother's recipe. "She called it her Depression Cobbler," we were told. During the Depression era, sugar was difficult to obtain, so women like this dear lady's grandmother had to come up with alternate methods, such as cane and sorghum, for sweetening the treat. Her ingenuity lives on today.

This makes me want to hop in the car and head to Mt. Mitchell TODAY! How cool that the peach cobbler was an old Depression-era recipe :)

The view is awesome. I wish I could have captured more wide-angled photos. As a plus, it's always chilly up there, so the break from the oppressive heat was nice.

Thanks for stopping by. I hope you're able to visit Mt Mitchell soon!

Thank you, Kathy! I'm glad you enjoyed it. Up next is the canyon in the mountains, Linville Gorge and Falls. It's an interesting and ruggedly beautiful place.

Hi, Kimberli. Your photos are awesome! The sky looks so peaceful and contemplative. It is all very beautiful.

I went to Mt. Mitchell several times as a kid, and for the life of me, I can't remember the story of Rev. Mitchell. Thank you for telling me that now. It is so tragic and makes me want to cry, especially since there is not a fence now to protect the grave. I wonder why?

The peach cobbler sounds amazing. I have got to check that out. Thanks for all the great information.

Hi Julie, and thanks! It is peaceful up there, despite the chill (I think it was in the 60's the day we were there.)

For more details on Rev Mitchell and the dispute with Clingman that led to Mitchell's fall, go to http://www.ncparks.gov/Visit/parks/momi/history.php.

And yes, try the cobbler. It's delicious!