A Week on the Bogue: Atlantic Beach

Along the southern edge of Croatan National Forest, south of Highway 24 and the blue waters of Bogue Sound lies Bogue Banks. Like the Outer Banks, this sliver of land is long and thin. So thin at points, stretch your arms and you feel as if you could touch water with both hands.

A slight exaggeration, but you get the point. We visited Bogue Banks in the fall of 2008 in an adventure that took us from Emerald Isle to Fort Macon. You can read about that visit in my Bogue Banks post.

Because there is so much to do on the island, we marked it for a return visit. I did that twice last week, once with my husband, and again when I had the privilege of attending a week-long writers retreat with four amazing Carolina authors. There's much to talk about, so I'll break it into separate posts.

Atlantic Beach lies on the eastern section of Bogue Banks, near Fort Macon and across from Morehead City. After crossing the Atlantic Beach Bridge, we continued straight, and parked in a sand-gravel parking lot. From there, we meandered around the boardwalk, checking out the beach shops, restaurants and concession stands. Beach goers lay in the sand or bobbed in the chilly surf, while several men constructed a volleyball net. Given the presence of three other nets, we assumed they were either preparing for the weekend or a volleyball tournament. 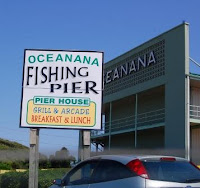 But we weren't there to sunbath or play volleyball, so we continued eastward until we reached the Oceanana Fishing Pier, visible on Google Maps at 34.697362,-76.726886.

Located behind the Oceanana Family Resort Motel, the pier stretches over the beach and into the Atlantic Ocean. From the looks of it, a favorite spot for those who enjoy fishing. Because we were taking a quick stroll, the manager allowed us to walk on the pier without charge. It wasn't clear if this is the norm, so be prepared to pay a fee. 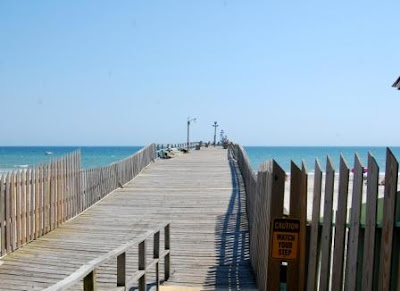 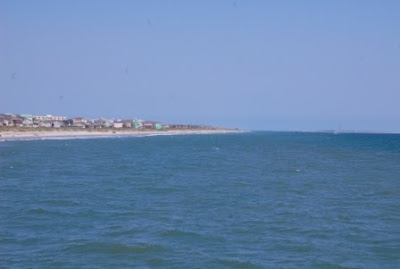 Fisherman lounging on wooden benches lined the slat railing on both sides of the pier, and a few pulled up their catches during our visit. One prize didn't seem to appreciate the disturbance, or facing the paparazzi so soon after his capture. 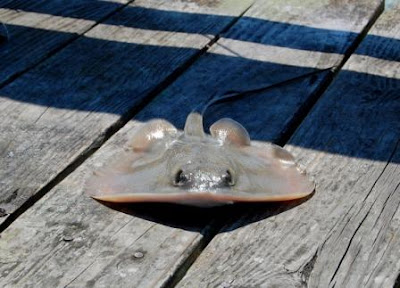 After swimming with sting rays on Cayman Island, I have a better appreciation for those creatures. I'm glad the man who caught this one released it shortly after I took this photo.

Note: if you're afraid of heights, the Oceanana Pier may not be the place for you. The boards are spaced enough to get a good look below, and are also weathered. Many have been replaced, and it appears a few will soon be. The railing on both sides aren't as sturdy as some I've seen, and while my husband didn't have a problem walking the planks, I did, so beware.

Several people have said they used to hang around Atlantic Beach during their teen years. From what we saw during our visit, with its beach, restaurants, piers, and close proximity to Fort Macon, the NC Aquarium, Morehead City and Beaufort, this NC attraction still holds its allure.

Excellent blog you have here but I was curious if you knew of any user discussion forums
that cover the same topics talked about here? I'd really like to be a part of group where I can get responses from other knowledgeable people that share the same interest. If you have any suggestions, please let me know. Thanks!

There are several out there, though I personally know of only a few. It depends on whether you're looking for information on outdoor destinations around the country or in the Carolinas. Backpacker.com provides forums for its members. In the Carolinas, I recommend the Yahoo group CarolinasAdventures. For more in NC, do a search on "hiking forums, North Carolina".