It is our custom to visit a Carolina destination on New Year's Day. This year, we chose the Pocosin National Wildlife Refuge. During a phone call this past November, a botanist at the refuge office indicated the number of snow geese migrating through the area generally peaks between Christmas and New Year's, so we headed to Pungo in an effort to see the twenty, thirty, or sixty thousand birds that reportedly stop by for a visit.

A bit of a mistake.

Eastern North Carolina has been blessed with an abundance of rain in recent days, and within the refuge, one travels around on a series of dirt roads. We knew it would be muddy, but after twenty-four hours without precipitation, we assumed the water had run off and our Durango could maneuver the resulting caked path. For the most part, it did. Unfortunately, the canals and lower-lying areas were flooded, and in places, the water stretched across the road. One large puddle blocked our way to the observation platform on Hyde Park Road. 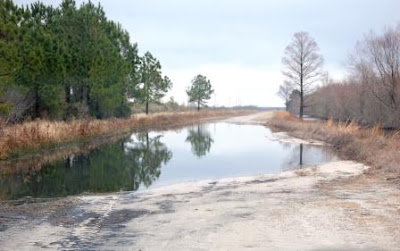 We turned around and tried an alternate route, but nearly got stuck in what turned out to be thick, sludgy mud at the obscure west entrance. The trip wasn't without its merits, though. We saw an abundance of birds, and a couple of deer who seemed to be as curious of us as we were of them. 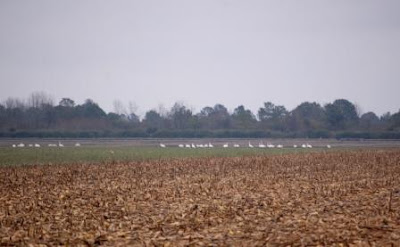 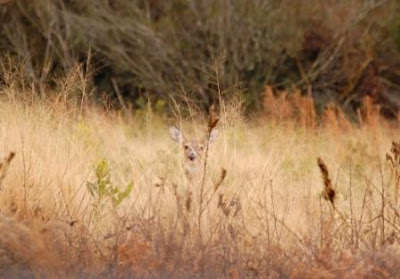 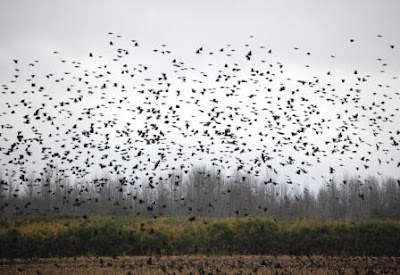 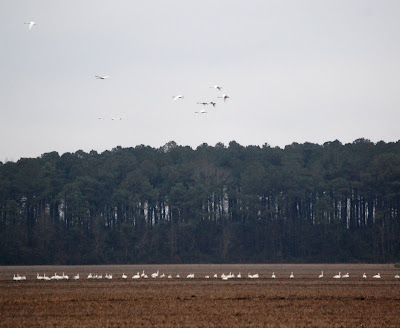 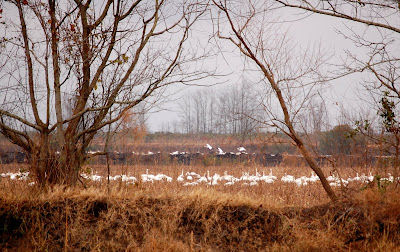 And finally, a few snow geese. Unfortunately, they were fairly high in the sky. The smudges you see on the photo is most likely muddy water: 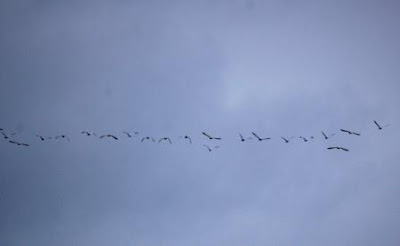 Pocosin NWR is a great place to view wildlife--when it's dry, or if you have the proper vehicle and a winch. Before you visit, contact the office for road closures, and before hitting any Carolina trail during hunting season, check to see if hunting is permitting on the lands. If so, wear orange.

Raw video of Tundra swans feeding in a local field:

Found the same conditions there Dec. 28... was definately not trying to ford the flooded areas in my mini-van. I did see swans in a field, similar to what you saw, but it was marked as a "closed area" so I didn't try to approach them for any photos. The geese continue to elude me. Maybe I'll give Pea Island a shot in a few days.

Ironically, the worst roads were those that led to the lake. And, after making it through the muck on the west side of Pungo, we discovered the road that runs parallel from west to the south entrance was closed for nesting birds. So back across the mess we went.

Here's hoping you find the geese at Pea Island. I look forward to reading your blog post.

I love Pocosin Lakes National Wildlife Refuge (PLNWR)! Thank you for choosing PLNWR and sharing your visit with others. I did want to make one correction, the original web site for the grass roots Navy's proposed OLF fight is: www.noolf.com, the web site you have listened, is an excellent web site for one of the 5 counties that are presently fighting against the Navy's proposed OLF.

Since our long struggle against the OLF, concerned grass roots citizens from near and far in 2008, started a Friends of Pocosin Lakes National Wildlife Refuge: www.pocosinlakesfriends.org. This January 2010, we (Friends of PLNWR) will be replanting trees on 10 acres of land on the refuge that was destroyed in the fire of 2008. We would love to have volunteers to help with on-going 5 year project. If you would to help and/or join the Friends organization, please visit our web site: www.pocosinlakesfriends.org.

Hi, swan, thanks for the correct link. I'll update that on the Natural Communities post. (Unfortunately, I can't correct the version published on the Chicago Sun Times via Blog Burst.)

Thanks also for the info on the replanting. It sounds great! I'll check out the page, and we'll be there if possible.