As I mentioned in previous posts, I recently purchased Exploring the Geology of the Carolinas, and I'm beginning to get a clue about some of the unique features hiding beneath the Carolina grass. Having read about them, I'd like to revisit several locations and explore them through more learned eyes.

Santee State Park is one such place. Located on the shores of Lake Marion, Santee SP is home to the half-mile Sinkhole Pond Nature Trail, named for several sinkholes, one of which is located near the trailhead. 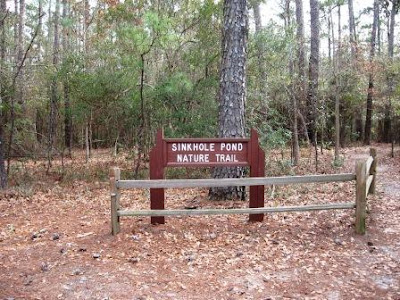 As it turns out, it's far more interesting than we thought. Had I owned Geology during our visit three years ago, I would have known that around 1842, an English geologist by the name of Charles Lyell visited South Carolina to study the "marl and limestone" and named what he found Santee Limestone. What is the significance? The limestone is prevalent in the area, and obvious at Santee State Park. According to the book, subterranean rivers carve caves through the chiefly calcium carbonate rock. If the roof of those caves—what we call the ground we walk on—is subject to acidic groundwater, over time, the lime dissolves and the caves collapse. And thus we have sinkholes. 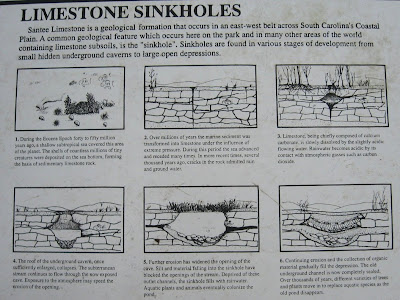 Considering the amount of limestone in this area and present along NC's coastal plains—the home of acidic water—I find this fascinating, if not slightly disconcerting. 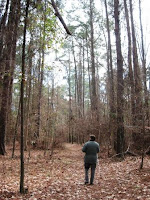 But Santee offers more than a couple interesting sinkholes. There are four hiking trails in the park, and we started with what had to be the easiest trail in South Carolina—the one mile Pinolly Trail. The path was fairly level and without too many foot obstacles, and we were never too far from the road.

The loop section of the trail was interesting. Where the the main trail was a typical path-through-the-woods trail, this section was swampy. We saw tupelo and bald cypress trees, reminding us that, like Congaree swamp, this part of South Carolina was once primordial floodplain.

We finished the Pinolly Trail in a relatively short time, and then meandered to the shores of Lake Marion. 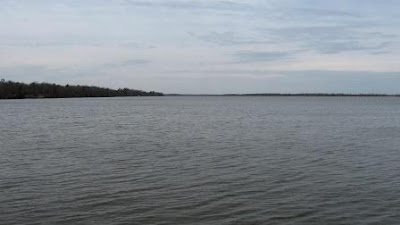 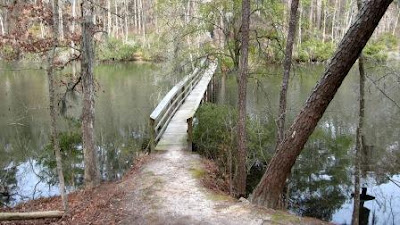 At 2,500 acres, Santee is "small" compared to other SC parks, but from what we saw, it's well suited for those who like to boat, fish, and camp. In addition to a campground where we saw both RVs and tents, nice cabins are available, including several of which are located on a pier. Before you go, make reservations through South Carolina online reservation system and call the park to confirm.

We spent at least half a day at the park, but we weren't finished with Santee. On another portion of Lake Marion is Santee National Wildlife Refuge. A resting ground for wintering waterfowl, the refuge is also home to an Indian Mound (which British forces used as the foundation for a fort during the first war for independence) and a Carolina Bay. We drove, we hiked, and we saw everything but the birds. 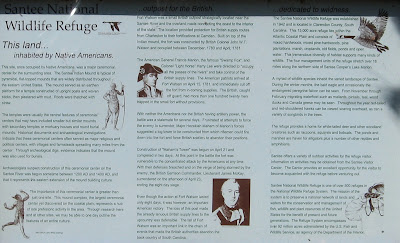 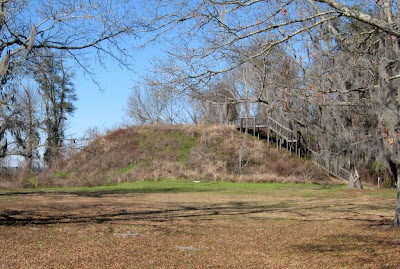 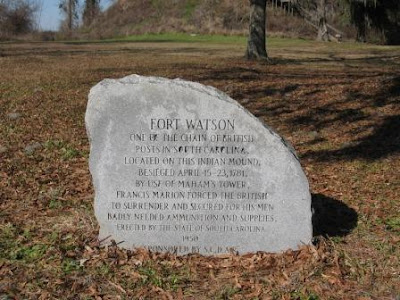 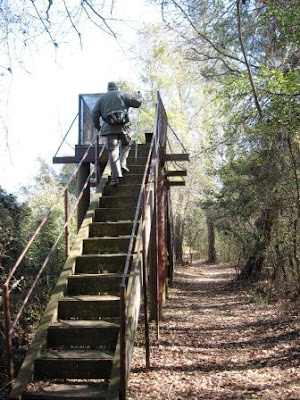 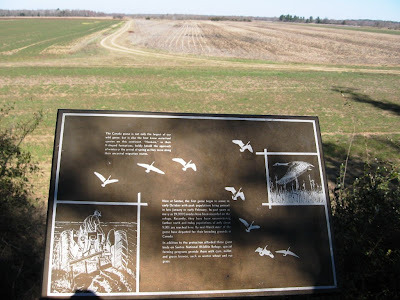 Just another excuse to return. For more information on Santee State Park, go to
www.southcarolinaparks.com/park-finder/state-park/535.aspx

sounded like a very fun and informative trip-enjoyed the read

Thanks, Kathy! We did have fun there, though our time was short. We need to spend a night in one of those cabins and do a little kayaking in Lake Marion. A second look at the map shows Santee might be a good launching point to head to an out-of-the-way place called Sparkleberry Swamp.

Oooh, stellar! So you visited the former Fort Watson ... was recently reading about that being taken over by Marion, about the time that Rawdon and the rest of the British abandoned Camden. (Which is about where I'm at in writing Loyalty.) It's nice to have pictures! (but I'm sorry you didn't see any birds ...)

Thanks, Shannon. Incredible, isn't it? I'll search through my photos to see if I have another that might be of help. As I recall, from the top of the mound, one is able to see the nearby bay, which, I believe but will check to make sure, is the Carolina Bay in this area. If the bay is a Bay, then it may be somewhat shallow.

In the post, I mentioned the refuge (where the mound is located) is a refuge for wintering waterfowl. Since they tend to stick to certain routes, I wonder if waterfowl flocked to this area during the early days of this country. Can you imagine what the British thought when thousands of geese blackened the skies?

The sinkhole information is very interesting, and I also enjoyed reading about the trails. I checked out the links, and the cabins look awesome. It says they also have back country camping, which I'd love to do there, too. Thank you!

I missed the backcountry camping. Thanks for pointing that out.

That sinkhole business is incredible. I read a story about a mule and cart that disappeared in Santee back in the 1800's when a hole opened beneath them. If we have an opportunity to return to the shores of Lake Marion, I'll definitely watch where I walk!