Most people think of the Outer Banks as a vacation spot, so many may be surprised to learn portions of the OBX are national wildlife refuges. Currituck NWR is located at the tip of the barrier chain, and in the middle, between Oregon Inlet and Rodanthe, you'll find Pea Island National Wildlife Refuge. This was our destination a few weeks ago, and you may wonder why given the cold snap North Carolina has been experiencing.

Because it's a great place to see wintering waterfowl!

After donning heavy coats, hats, and gloves, we grabbed our gear and set out on the three-hour drive. One travel option would have been the ferry from Swanquarter to Ocracoke (which would have allowed us to view even more waterfowl), but that particular route comes with a fee, so we traveled east on Highway 64. When we reached Hwy 12 on the OBX, like the birds we sought, we headed south.

From a past attempt to visit the refuge, I knew the visitor's center was located on the right side of the road, just a short distance south of the bridge spanning the Oregon Inlet. It was our first stop, and proved to be our best, for inside we met the Moores, who serve as volunteers for Pea Island. When we walked through the door, they greeted us with voices as warm as the interior of the spacious lobby/gift store, and we spent the next half hour or so talking, listening, and searching for birds they pointed out in the marshy areas of North Pond, located on the sound side of the OBX, through spotting scopes.

During our conversation, I mentioned our ultimate goal for this trip—to find the snow geese that had managed to elude us. With a smile, Neal Moore made us an offer we couldn't refuse: a guided tour to South Pond, just down the road from the visitor's center. By now I'm sure you know what we found: 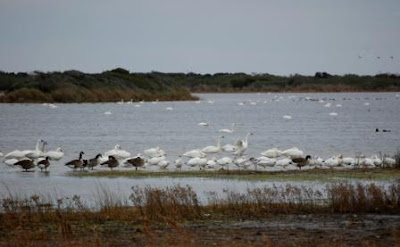 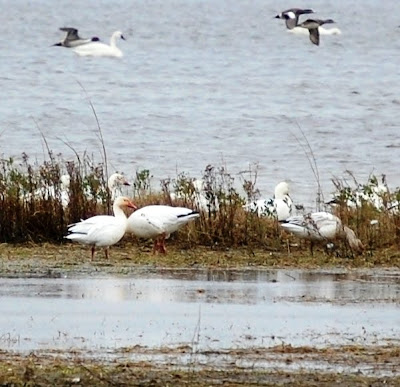 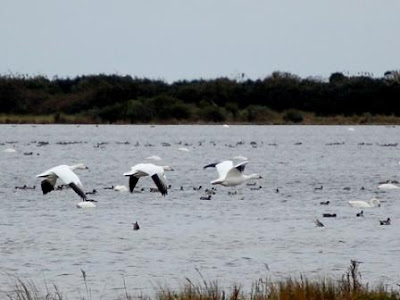 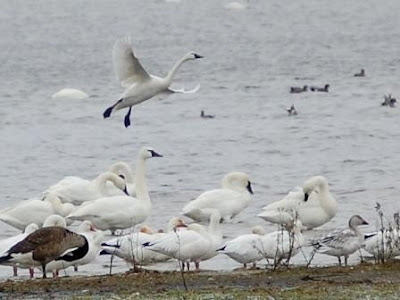 It wasn't the thousands we'd heard about, but I wasn't complaining. When my fingers could no longer stand the brisk upper-20 temps, we headed back to the visitor's center, where we attempted to walk the North Pond Wildlife Trail, one of the many Charles Kuralt trails we've encountered in eastern NC. I had my eye on an observation platform visible from the visitor's center, and we hit the boardwalk, passing under a low canopy of tangled tree branches before cold air turned us around: 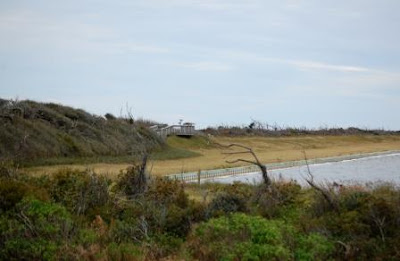 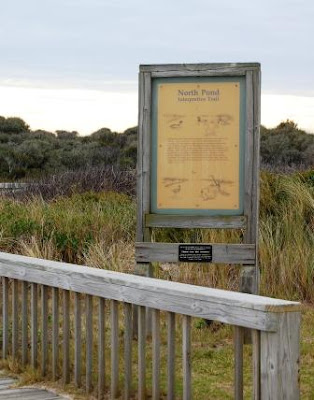 I later learned there are two trails at the refuge. The North Pond Trail, and Salt Flats, on the northern tip of North Pond. Pea Island is an excellent birding area, and the refuge has accommodated visitors while providing shelter for birds who need rest during their long journey south.

Pea Island NWR has over 5,800 acres (not counting water) on a stretch of land twelve miles long. In addition to playing host to migrating waterfowl, Pea Island sees its share of nesting sea turtles in the spring and summer. Oddly, it's also home to the Oriental, a steamer that sank off the shores of the OBX in 1862. Another gentleman at the visitor's center pointed us to a brochure that tells the story of the ship that fell prey to North Carolina's Graveyard of the Atlantic, and invited us to cross the street and traverse the dune to see the boiler which is still visible in the choppy waters. We declined on this trip, but as always, we have an excuse to return.

For more information on Pea Island, go to www.fws.gov/peaisland/ And if you're heading that way, don't forget to take your camera, binoculars, and plenty of warm clothes. A thermos of hot apple cider wouldn't hurt, either.

Our thanks to the Moores, especially Neal Moore, for serving as our guide on this trip.
Posted by Kimberli
Email ThisBlogThis!Share to TwitterShare to FacebookShare to Pinterest
Labels: beaches, Coastal NC, NWR, Outer Banks, Pea Island NWR, waterfowl

Hi, Kimberli. Thanks for the brochure on the last post. I just took a look.

These pictures are amazing! I especially love that you caught some snow geese in flight. Yes, it's such a beautiful place and well worth the trip.

I hope you had a wonderful Christmas. Best wishes for a New Year full of many good moments. It has been a pleasure to read Carolina Towns and Trails again this year!

Thank you, Julie. Happy New Year to you as well, and many blessings to you and your family!