Then and Now: A Cosmic View of NC's Coast

In addition to his waterfall and wildflower books, North Carolina author and photographer, Kevin Adams, has compiled a photo treasure for lovers of all things Carolina. In North Carolina, Then & Now Mr. Adams presents two views of various areas around the Tar Heel State--one from the past and one from the present--by duplicating the location and angle of subjects in numerous old photos. That concept led to the following.
Thanks to my dear husband who read my Christmas list, I recently added The Natural Traveler: Along North Carolina's Coast to my outdoor reference library. It's a fantastic book, one I regret not purchasing earlier this year. I learned more about NC's estuary system from the pages I read than I had in the previous year surfing the net and reading material on my bookshelve. I also learned something that should have been old news--during a 1969 Apollo mission, an astronaut took a picture of North Carolina's coast. Upon reading that nugget, I surfed to Nasa's image library and using their download feature, downloaded the following: 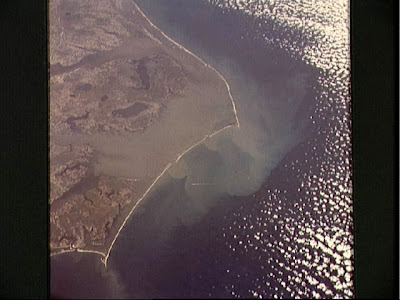 Lake Mattamuskeet is clearly visible just to the left of the center of the photo and above that, the Alligator River and the Albemarle Sound. Knowing hurricanes and other factors have altered the OBX, I wondered how this photo compared to the view today, and then realized I have the ability to find out. Switching to http://www.mappoint.com/, I captured this screenshot: 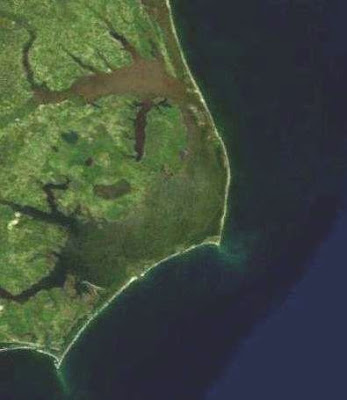 The angle is a bit different but you can still see the same features. Interestingly, Lake Mattamuskeet is shaped differently, as is the upper curve of the Outer Banks. Zooming in, it's clear a few of the inlets remain the same, but from what it appears (and I could be wrong) the older photo shows more more breaks in the banks.

Viewing the coast from the heavens--and from the past--and comparing it to the present perspective was fascinating. I'll have to add Mr. Adams' North Carolina Then & Now to my library.

Kimberli...
Love your blog. Quite informative. My son lives up near Lake Mattamuskeet and we used to live in Beaufort and in the mountains so you know I love Carolina trails and backroads. Nothing like it.
Keep up the good work.
PS...Do you ever go paddling? I'd love to get in with a fairly novice group and start serious paddling.

Thanks, Deborah. We enjoy exploring the Carolinas and sharing our experiences with those searching for Carolinas destinations to visit. I'm glad it's helpful.

We haven't been paddling yet but we've been talking about it for a couple of months (so if you're looking for fairly novice, that would be us.) My thought is to contact someone in Oriental to get some basic information and to see if we can get a guided tour. We'll take it from there. Stay tuned for more information.

Beautiful! This is another book I will need to check out. I'm like you...gonna need new bookshelves. Wonderful posts. I'm having fun catching up on your adventures:)

I'm having fun catching up on your adventures

Then you're going to love the next one, lol