Lighthouses of the Outer Banks is another subject I've been avoiding. Not because we haven't seen any--we've visited three of the structures since our arrival (four if you count the one we saw in the distance.) But when I sat down to pen a post, I realized I knew precious little about them besides the fact they're tall and they shine or shone light across the water to guide mariners home.

But there's more. The NC coast is known as the Graveyard of the Atlantic and there are several lighthouses stationed along the Outer Banks and on the Crystal Coast. This led to several questions. What made the waters so dangerous and was there a design to the placement of the lighthouses? As I researched, I found some of the answers and then uncovered answers to questions I hadn't thought to ask. I learned a bit about the source of the bright shaft of guiding light, and the purpose of the various patterns painted on the lighthouses along the Outer Banks. I read about light stations (small versions, usually on a platform), the effect erosion and OBX shifting has had on the lighthouses, and more.

Attempting to cover all that will take days and a lot of blog space, so I'll share what I can and give you resources for the rest. 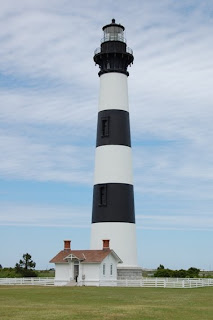 We didn't know Bodie (pronounced body) Island Lighthouse existed until we saw it a few miles south of where Hwy 64 meets Hwy 12 (the road that runs south along the OBX.) We've been twice and so far, it's one of our favorite lighthouses. Not because it's more attractive than the others--its beauty easily matches Hatteras--but because of it's location and the presence of marshes just behind it.

After turning onto the road that leads from Hwy 12 to the parking lot, we stopped and marveled at the sight before us. The lighthouse is located in a field just off the parking lot allowing the one hundred and fifty-plus foot structure to tower over its visitors. We spent several minutes taking photos, then meandered across the football-sized field to the lighthouse.

With its broad, horizontal black bands, Bodie is easily distinguishable from its coastal brethren--which authorities intended when they chose that design. What you see today is actually the third Bodie Island Lighthouse. The first had to be rebuilt almost as soon as it was finished due to structural deficiencies. The second was demolished when Union Forces visited the Outer Banks uninvited during the War Between the States. According to various sources, the third and thus far final Bodie Island Lighthouse was built shortly after 1872.

The small structure you see in the photo (in front of the lighthouse) was once used to store oil for the lamp that created Bodie's beam, but since its replacement, the original 1st-order Fresnel Lens that now lights the way, works on a photocell, the structure is empty. The lighthouse is opened to the public on occasion, but to my knowledge, only to look inside. Climbing the metal steps is not permitted. 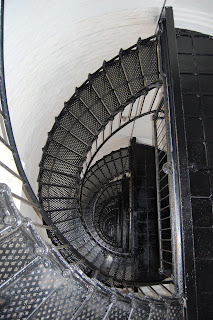 That's okay with me.

As I mentioned earlier, a portion of the Outer Banks' estuary system is located behind the lighthouse. I walked along a boardwalk past tall grass, reading placards on plant life and nutria along the way, and stopped at an wooden observation platform. A large flock of white birds floated in the distance and I watched them until I was certain they had no intention of flying or coming closer so I could get a photo. 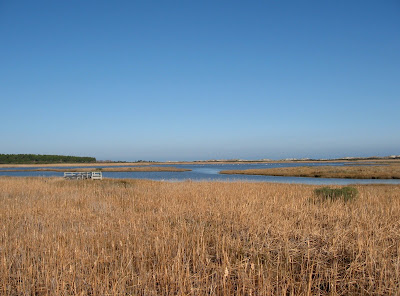 Bodie is in good shape, so it's a favored subject of photographers and painters. However, because of it's beauty and accessibility, it's difficult to take a photo of the lighthouse without capturing tourists as well. If you can't visit during low season or on a weekday in spring when your odds are better, have patience. On both trips, we managed a few shots sans tourist just by waiting.

The old lighthouse keepers house is also located on the premises, and serves as a Visitor's Center and a bookstore (which we frequent when we can. You did receive the Bodie Island notecard I sent, right??) For more information on Bodie Island Lighthouse, go to:

A book I purchased to study for this blog post is Lighthouses of the Carolinas: A Short History and Guide by Terrance Zepke.

So why the need for so many lighthouses along the coast? To learn about the Graveyard of the Atlantic, click HERE
Posted by Kimberli
Email ThisBlogThis!Share to TwitterShare to FacebookShare to Pinterest
Labels: Bodie Island, Coastal NC, estuary, Lighthouses, Outer Banks