For months now, I've put off sharing a destination we first visited in December of last year and again this past May. Part of my problem has been determining the scope of what I should discuss. Our first trip to the Outer Banks (henceforth referred to as the OBX) encompassed the outskirts of Nags Head to Salvo and the second, from Kitty Hawk to Ocracoke. That's a lot of ground to cover. A lot of dunes, concurrent views of sound and sea. A lot of natural habitats to explore, outdoor recreation to draw your attention to, and oh, well you get the picture. Though harrowingly narrow in some places, the OBX is a lot of everything.

So I didn't cover anything.

But the time has come, so, after twittling with words for a couple of days, I've decided--like so many of our trips--to take off and see where we end up.

It wasn't our intent last winter to visit this North Carolina treasure. Our original goal was Edenton and Roanoke Island, but on our way to the second stop, a sign informed us Nags Head was a mere twenty miles away. How could we pass it up? So passing up the many attractions awaiting us at the site of the famous Lost Colony, we drove to the eastern edge of the United States and turned right. And to our delight, we were on the Outer Banks.

I'd heard about the OBX, but I knew little beyond what people had told me, that it's a great outdoor destination. If you look at a map of North Carolina, it's the sharp edge, the lip liner if you will, along the NC coast that juts to a point before scooping back to the mainland. Since our visit, I've learned it's more than that and I feel wholly inadequate to cover this fragile ecosystem/tourist destination. You'll understand why as you read.

The chain of islands known as the OBX begins around the Virginia/NC border, but I'm having trouble determining where it ends. Some sources say Ocracoke. Others include as far south as Bogue Banks. Personally, I include the entire archipelago from the Virginia border to Shackleford Island since I cannot see a difference between the northern section and the southern. NC may revoke my citizenship for that, but sorry, it's all breathtakingly beautiful to me.

Once on the OBX, one of the first things that struck me was the width. Though 175 miles long according to Encyclopedia.com (another source says 200 mi, see dispute listed above), it's narrow, earning it the nickname "Ribbon of Sand". Encyclopedia.com places the width at one mile or less and indeed, in some places, we saw both sound and ocean in the same glance: 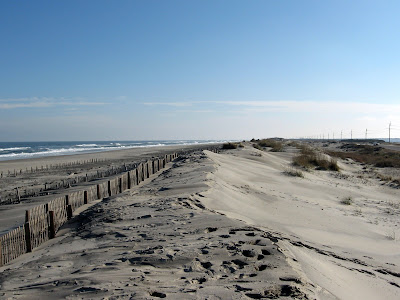 See the touch of water on the upper right of the photo?

Since our first visit, I've learned more about the OBX (though not nearly enough.) First from a PBS documentary titled Ribbon of Sand, and then from various sources such as my copy of Coastal North Carolina: Its Enchanting Islands, Towns, and Communities. Enough to form a decent overview. Unfortunately, it's complicated, but I'll try to explain.

Think of long, thin islands, stretched in a line and joined together by bridges in some places, and by ferries in others.1 On the west side lay wide sounds. On the east, the Atlantic Ocean, and along some of its edges, swirling sandbars (shoals) visible on satellite photos but not to approaching ships. Traveling down Hwy 12 alongside tall dunes and under a sphere of blue sky gives you a feeling of freedom. You open the car window and take in the breeze and the view of herons walking dapperly in shallow waters.

You reach Rodanthe (ro-danth-ee, yes of Nicholas Sparks fame), see dozens of three story beach houses and you want to stay, but you travel on to Hatteras where you're delighted by the spiral banded lighthouse stretching regally into the sky and by boats drizzling through the water. You sit on the beach, hidden from civilization by an undisturbed dune and lay back in the sand, releasing a sigh of contentment. After a ferry ride to Ocracoke, Blackbeard's headquarters and the place of his infamous demise, you dine on local seafood, listening to tales of the pirate's ghost and wonder why you ever competed in the rat race.

That's one side of the OBX. Another is the dynamic, fragile environment. The ever-shifting coastline that's slowly eroding from waves, hurricanes, and development, which forced conservators to move the Cape Hatteras Lighthouse further inland.

The OBX has an extensive estuary system and such, hosts migratory birds. But it's also home to thousands of people whose livelihoods depend on tourism. Because of its compact width, man and nature must live together, and often, the needs of one clashes with the other. This past summer, authorities closed off several areas along the OBX because endangered birds were nesting, thus endangering businesses already hurting from high gas prices.

Saving one's job versus putting a near extinct bird in the air. Tough call. One I couldn't make.

There's more. Oh so much more. But I hope this gives you an adequate glimpse of the Outer Banks, its fragility, and its must-see beauty. In my next post, I'll discuss the lighthouses we saw this past year. The rest I'll have to cover in posts as we're able to return for additional visits. But I doubt I'll master all things OBX, there's too much to learn.

For now, if you'd like more information on the OBX, go to http://www.outerbanks.org/

Photos from our December and May trips are on our Smugmug site.

If you decide to travel to the Outer Banks, for land's sake, read my post on the Ferry schedule before you go. It may keep you from getting stuck on Ocracoke Island overnight and spending the night with a few OBX ghosts!
1. Coastal North Carolina: Its Enchanting Islands, Towns, and Communities (Pineapple Press) Pg 1

Beautiful, Kimberli! You've done a very thorough job, and it's a great read. I feel like I always say the same things to you over and over...beautiful, wonderful, excellent. But it's so true. It's always a pleasure to look at your blog!

Thank you! I'm glad you enjoyed it. Sometimes I think I write specifically for displaced Carolinians, lol.

Did you see the newest Mattamuskeet photos? The sunset was awesome.

Oh, yeah! I meant to comment on it last time. Beautiful. There's something about a Carolina sunset...I've never seen another one as beautiful. And I haven't seen any pictures that come close to yours. Seriously. You really should submit them to magazines! Or do you already?

Thanks, Julie. I love to take pictures, but I'm far from being a professional. Fortunately, I belong to a great hiking group (CarolinasAdventures.) Several of the members are excellent photographers and serve as mentors to those of us with slow shutter speeds, giving us advice and providing us with excellent examples to emulate.

While I submit a few photos for contests and such, only a few have been published. Believe it or not, I'm in point-and-shoot mode to a large degree, but I hope to take a photography class soon. I hate ruining good photo opps.