Eastern North Carolina has more hiking trails than I realized. In addition to trails at the various ENC state parks and on Bogue Banks, we recently learned Croatan National Forest has over twenty miles of hiking trails within its boundaries. Last year, we visited Great Lake and the Cedar Point Tideland Trail on the southwest side of Croatan at the White Oak Estuary, and a few weeks ago, we found the Island Creek Forest Walk, located in the far reaches of northeast Croatan.

Both exploring north carolina's natural areas and The Natural Traveler: Along North Carolina's Coast state this trail is a half-mile nature loop. However, the map we found stapled to a tree indicates it intersects with other trails not listed in the books, and that the entire system is a much longer Island Creek Trail: 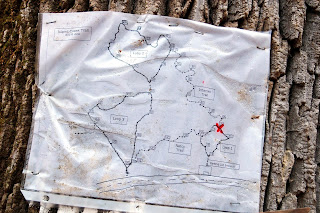 Not knowing this in advance (and recuperating from the stomach flu) we settled for the half mile loop on this occasion. Since we forgot it was hunting season, that was probably a good choice.

But curious about the remaining trail system, I later called the Ranger Station in New Bern and was told only the half-mile loop that you see at the bottom right of the map is associated with Croatan. Local residents are responsible for the rest, as well as that map, so take caution when straying off the national forest's trail!

Island Creek is a great choice for a fast escapism hike. After parking in the small, gravel parking area located on Brice Creek Rd (SR 1004) we entered the trailhead and instantly left the world behind. Fallen leaves covered the mostly level path, but white blazes and numbered signs kept us on track. Besides an occasional shotgun blast in the near distance, we heard only the crunch of the leaves beneath our feet and an occasional bird chirp. Natural Traveler says this area is known to host pileated and hairy woodpeckers, but besides a few trees that looked as if they served as target practice for bored hunters, we didn't see either.

Nor did we find the pamphlets that correspond to the numbers posted along the trail, and I'm sorry we didn't. Through the bare trees we spotted what I felt were an unusual amount of ferns growing along the forest floor for this time of year. If these ferns are uncommon for the region, then according to exploring north carolina, they're the result of a change in pH created by the limestone present along Island Creek, the outcroppings of which various sources (including fellow CA member, Kelvin Taylor. Thanks, KT) report you can spot along the banks. 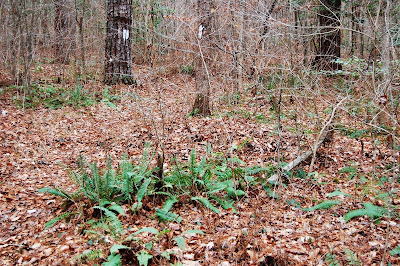 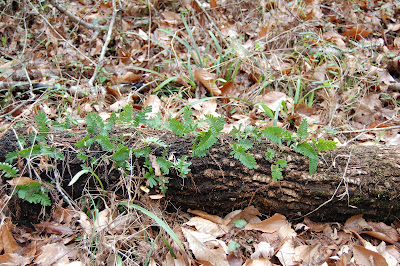 What else is out there? Much, including the knobby "gnome" knees of a plethora of cypress trees, which stand along the forest floor and in the middle of the trail, often hidden by the ground cover. So beware while walking. 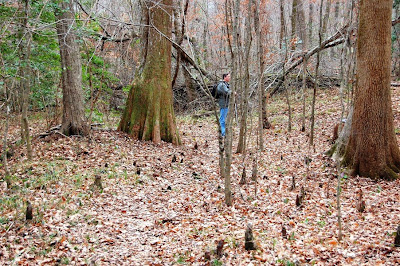 And a tiny blue stuffed hippo. 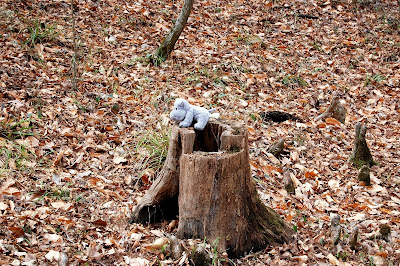 If you're in the New Bern area, and you're in the mood for a relaxing, albeit quick hike, check out Island Creek Forest Walk. But if it's hunting season, don't forget to wear orange. And watch out for hippopotamuses.

I love it! All those cypress knees are beautiful (but treacherous). This sounds like another wonderful adventure. As always, you bring back beautiful pictures to share with us.

I'll be sure to watch out for hippos when I go...ha! That's cute. Thanks for the informative and entertaining writing.

It was a brief one, but fun, and it definitely has potential. With the limestone affecting the surrounding plant life, the spring and summer bloom season should be interesting. And, it has the added bonus of being just outside New Bern (Brice Creek Rd runs into Madame Moore Lane.) One can definitely stay busy in the area.

Yep, I tripped on the cypress knees a few times. You'd think I'd be used to those things by now.

Thanks for the write up. I've avoided this trail for years as all the descriptions I've seen listed it as a 1/2 mile trail. I visited it today and was delighted to find there's so much more there. Since you've been there and seen the map this may make sense: I hiked Loop 1 to the Intersect Trail... IT to Loop 2... Loop 2 to Loop 3... Loop 3 to the Natcy Trail... NT back to Loop 1 and the parking area. According to my pedometer my trek was about 3 miles. The map is accurate, the blazes easily found and correspond to the motations on the map. I can't wait to give the entire perimeter a go... listed at about 5 miles!

Thanks, Bob. Yes, it does make sense, though as you read, we stuck to the main trail until we could figure out who posted that map and why. It's good to get another person's opinion on it. Thanks for taking time to comment!

I'd love to know who did the blazing and mapping. They did a great job. I'd like to thank them for their hard work.

Maybe someone will stumble across this and tell us. ;)

They did indeed! Thanks again for confirming the map's accuracy.