We continued north on I-95, enjoying the gently rolling hills, roads that curved with just a hint of playfulness, the cool shade of tall, leafy green deciduous trees and finally, air without smoke. The scenery was lovely. Orange day lilies standing alongside the road waved to passing cars. Darker orange trumpet vines hung on trees and bushes like Christmas ornaments. We thoroughly enjoyed the meandering drive until we exited the bypass and got stuck on a bridge in construction traffic for fifteen minutes.

"What are you doing?" I asked my husband when he turned the ignition.

I couldn't argue with him there. In his hands, my little Hyundai gets over 34 miles to the gallon. My driving brings it down to about 28/mpg, as he likes to point out. But on this occasion, the interior of my black car was getting hot, fast.

"Where are you going?" he asked when I stepped out of the car. What did he think? We were stranded on a bridge and I had two cameras in my hand!

I snapped some photos, but when the heat from the now visible sun became too hot, I jumped back in the car and asked hubby to crank up the air. Fortunately, traffic started moving shortly after, and once again, we were heading toward Turkey Island and the Presquile NWR.

~~*~~
"Hey, there's Shirley Plantation," Kel said. I glanced to my left and saw the entrance just as he was about to turn into the driveway.

"Where are we going?" I asked.

"We're not here to see Shirley Plantation. We're going to the Wildlife Refuge."

He grunted his displeasure but continued along the two-lane road located somewhere southeast of Richmond. Then we came to a T-Road junction.

He smiled. "There's another plantation to the right."

"There's a ton of plantations around here." About a half dozen from what I could tell. The signs were all around me, but I didn't stop to think about it at the time. This was old Virginia, and we were traveling along a river. I've lived in the Carolinas long enough to know there should be plantations here.

Kelley asked me if I wanted to go.

"It's getting late, hon. We need to find this place and get home."

He offered a dejected sigh. "Okay then, which way?"

I checked the map. "I'm not sure. We should have passed Turkey Island by now but I can't locate this highway number. Turn left. We'll skim around it and see if we can find a way in."

I made the unfortunate mistake of leaning over to examine the atlas. Kelley chose that moment to come to a sudden stop.

"Hon, what are you doing?" The words sounded strangled to me, but then again, I was doubled over with a seat belt pressing against my chest.

I pushed against the seat belt in an effort to loosen the tension. When it released, I began to straighten, but stopped when I saw the name Robert E. Lee.

I'm a southerner, and I love southern history. While nowhere near an expert, I read what I can in books, brochures, and on historical markers. And this one was a doozy. The house I'd rebuffed had not only been built in the early 1600's, but it was the birthplace of Ann Hill Carter, the mother of Robert E. Lee. And young General Lee had spent some time at the plantation in his youth. 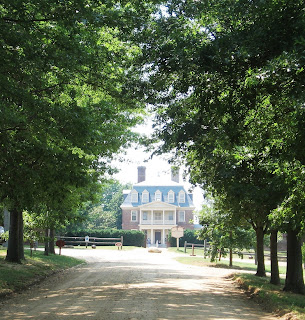 The house was bigger than we expected. It sat in the distance, huddled in the trees in the middle of wheat-filled land that spread out like butter on a biscuit. We chose not to go inside on this occasion, but now that we know better, we'll take a special trip to Richmond just to see the plantations.

Twenty minutes later, we were back on the highway.

"Turkey Island Rd. Turn around!" I said a short time later. A tailgater prevented my husband from pulling another quick stop, so he drove about a tenth of a mile and pulled into what we thought was a gravel turnaround.

And my eyes about popped out.

Again, though I knew we were in Virginia, I'd forgotten we were in Old Virginny. Even if I had remembered, I doubt I would have expected to see markers bearing history and names of people who were almost storybook figures to me. Over the course of the next half hour, we would see the names Thomas Jefferson, Robert E. Lee (again), Robert Pickett, Nathaniel Bacon, and Pocahontas, among others. We read about the Union army burning Pickett's house on Turkey Island (I knew it was there somewhere!), and the great Flood of 1771 in which more than a hundred people died. We found out we were near Malvern Hill Battlefield, Petersburg National Battlefield, and more.

We were in the heart of American History. And by the time we figured that out, we had to leave. The good news? When I set Garmin for home, we discovered Richmond is a mere two and a half hour drive from our house.

That's good, because we plan to go back often and explore the treasures Richmond has to offer. I was also determined to find Presquile NWR and Turkey Island, especially after I found evidence of the latter's existence—until I got home and learned Turkey Island is NOT part of the Refuge, despite the green shadings on the map. It's private land. I also found out entry to Presquile NWR is by appointment only, and I doubt a couple of tourists can earn that favor.

So we missed out on two Wildlife Refuges, a cypress swamp, and at least one plantation. The day was far from a bust, though. We discovered the existence of those plantations and the close proximity of places we hadn't considered visiting because of their distance.

I took the wheel about twenty-five miles north of the NC border, and as we sipped a Starbucks Grande Hot Chocolate we made a special stop for, we began making plans. Washington DC is only four hours from our home. Gettysburg and Philadelphia, where I have to go to research my current novel, is five and a half hours. Shenandoah National Park is four and a half hours. The possibilities are endless, as is our potential to learn more.

We have a new sandbox, all because smoke from the Carolina wildfires lead us to the heart of American history.