Medoc Mountain State Park is located northeast of Raleigh, just south of Roanoke Rapids and the Virginia border. It's named after the Medoc Vineyards, once located in the area. The park has seven trails, ranging from .5 miles (Air Awareness) to 3 miles (Bluff Loop, and the Summit Loop, which we hiked.) To reach the Summit Loop from the Visitor's Center, hikers must walk up the road a short way to the Bear Swamp Trailhead, which then intersects with the Dam Trail, which leads to the Summit trail.

The brochure states the level of difficulty of the Summit Trail is easy to moderate. We call it easy, but we recognize the hazards of hand size granite and quartz rocks littering the trail in some sections. Tree roots snake into the pathway in other areas. It's steep in at least three places, but no more than steps in a two-story home. The remainder of the pathway is fairly level, though it does grade upwards at times.

The forest is mostly deciduous, but with patches of pine. Consequently, we saw a forest floor consisting of leafy green plants in some areas and pine straw in others. We also saw tall ferns, creeping cedar, and one set of Lady Slipper leaves. We crossed bridges over creeks--no rock hopping on this trail. On one side of the loop, the trail winds through the forest. On the other side, it skirts Little Fishing Creek, where the sound of a bubbling cascades blocked by trees taunted us.

Unlike the coastal plain, the water in this area is brown. Water that flows from the mountain and piedmont is brown because of sediment and vegetation, unlike the acidic blackwaters of the coastal plain, which is stained by the leaves of cypress trees.

We didn't encounter other hikers along the trail, but we did see a lot of critters including lizards, toads, and a turtle. No snakes. No skeeters, either, but several tiny, red ticks did attempt to hitchhike on us. On subsequent hikes, we took home leg fulls of chiggers. The only sounds we heard were a few birds chirping, wind blowing through the canopy above us, an occasional woodpecker, and a group of kids on another trail. Several times during the hike Kelley reported smelling something sweet. Honeysuckle was the cause on one occasion. A bush-like tree with tiny bells, another. The big surprise of the day was mountain laurel growing on the slopes along the trail. 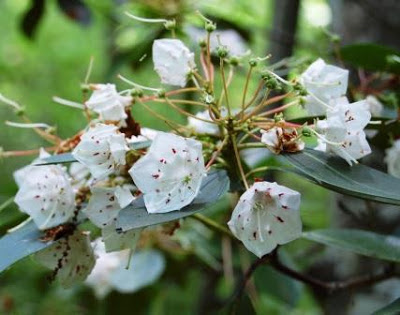 While at the Visitor's Center, we learned Medoc Mountain isn't actually a mountain. It's a ridge a) caused by a giant granite rock apparently pushed up by lava, or b) the core of a mountain ridge left over by erosion(1). According to the USGS's Volcano Observatory:


(Medoc Mountain State Park) sits near the fall line, an area where the hard, resistant rocks of the foothills give way to the softer rocks and sediments of the coastal plain.(1)

Erosion then washed away the terrain surrounding the rock that now remains.

Hike duration from the time we left our car until we returned was two hours and thirty-five minutes. Overall a great day on a trail that made me feel like I was back in the mountains. 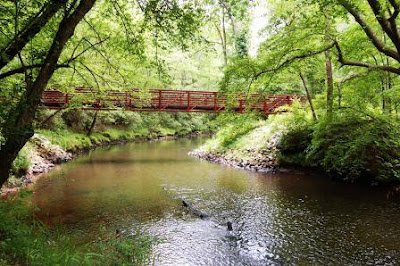 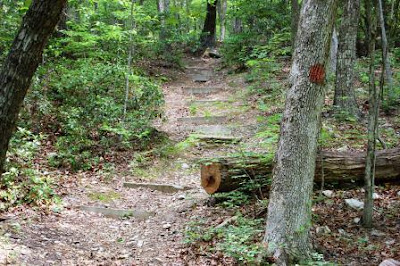 This sounds like a wonderful place to hike. It seems like you saw some wonderful things along the way.

It was, and I was quite surprised to find something that so resembled a mountain hike on this side of the state. Fortunately, it's close, so whenever we're in the mood for a good hike, we know where to go.

On the downside, those little ticks turned out to be deer ticks. And one was pretending to be a mole on my hip. Next time we visit, we'll have to make sure we use a tick repellent that repels those bugs without poisoning us too much!