Alice Wisler on Moonshine and NASCAR

My noveling life intersects with my love for the Carolinas in today's post. Recently, North Carolina author Alice Wisler stopped by my writing blog to share a tale from the mountains. A tale she wove into her new novel, A Wedding Invitation.

This comes at a great time. Not long ago, I purchased James Stehlik's Distilling the Mysteries of Hogback Mountain, a presentation on moonshining in South Carolina's Dark Corner. While we haven't hiked Hogback--in addition to the mountain's name, literally a term meaning "A ridge with a sharp summit and steeply sloping sides"--my husband and I have hiked trails near there, where evidence of past moonshine operations still exist. It piqued my interest. I recently watched a UNC presentation on Dark Corner, and I look forward to reading Mr. Stehlik's book, which I'll review here.

Until then, here is Alice Wisler on moonshining in North Carolina, and its influence on NASCAR. I included two photos I snapped while hiking trails in the old Dark Corner.

~~~~
Sugar, water, malt, cornmeal and yeast. These are the key ingredients for moonshine. No, I'm not planning on making a batch today, but I am interested in the subject, especially since it fits in with my novel A Wedding Invitation, and making moonshine has been quite profitable in my state of North Carolina.

What's the history of moonshine? Well, one thing is for sure, it came about before NASCAR (National Associate of Stock Car Auto Racing). In fact, making a moonshine run in a fast car was how NASCAR got her beginnings. During the Prohibition years of 1920 through 1933, running from the law in order to make a moonshine delivery at night in a souped-up car was common in the mountains of North Carolina and Tennessee. Once Prohibition ended, the question of what to do with these racing cars was raised. That's when car races became popular entertainment in the rural South. Wilkes County, North Carolina was the hot spot to see the races. Vance Packard called Wilkes County the bootleg capital of America. 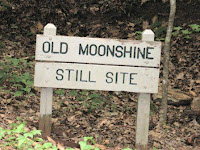 Who invented moonshine? We can thank the Scots and the Scotch-Irish, who settled in the Appalachian Mountains 300 years ago and made moonshine like they did back in Scotland. In their Scottish farmlands, these farmers used leftover grains to ferment into liquor. The farmers, weary of over taxation on their properties and the absence of religious freedom, immigrated to America for better lives. They brought their hopes, families, and distillery ingenuity with them.

Today, folks are curbing the 180 proof moonshine of days gone by and giving the whiskey a smoother, gentler taste. Liquor stores sell moonshine flavored with fruit which is easier on the palate. And moonshine is legal to produce as long as you have a license like the makers of Catdaddy, a distillery in Madison, North Carolina.

In A Wedding Invitation, there is much talk of Uncle Charlie, a notorious relative, who had his share of moonshine tales. Here's some about him on page 53.

I nod, recalling having previously heard the name of this particular cemetery. Uncle Charlie is buried there, with a headstone that has a motorcycle engraved in it. My great-uncle liked to ride fast, and my relatives tell me that his Harley out-sped any police car on the Forsyth County squad. He also made moonshine, borrowing a recipe from Scottish immigrants who settled in the Appalachian Mountains.

Anyway, I saw a program on how moonshine was made in our mountains (and am sure it still is), and ever since then knew I had to incorporate my new knowledge into one of my novels. 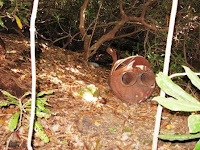 Moonshine, truly a Southern tale of adventure, secrecy, and the birth of NASCAR.

Alice J. Wisler grew up as a missionary kid in Japan. Her first novel is Rain Song (Christy Finalist 2009), followed by How Sweet It Is (Christy Finalist 2010), and Hatteras Girl. Her fourth novel, A Wedding Invitation, was released on October 1, 2011. All of her books take place in North Carolina where she lives with her husband, two dogs, and children. Alice also teaches grief-writing workshops---Writing the Heartache---and speaks at conferences, retreats, and seminars in memory of her son Daniel, who died in 1997 from cancer treatments at the age of four.
Posted by Kimberli
Email ThisBlogThis!Share to TwitterShare to FacebookShare to Pinterest
Labels: Blue Wall, Dark Corner, History, Moonshine