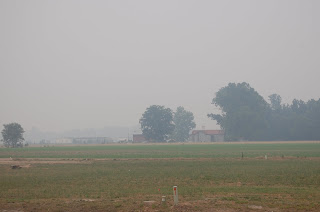 "Maybe it'll be clearer up north," I said.

We glanced through the Hyundai's windows at the thick layer of smoke hanging above acres of wheat and corn, and obstructing our view of the streets. I'd set Garmin for the Cashie Wetland Walk, and we were picking our way through small towns located along Hwy 222.

One couldn't deny that. After all, the evidence was surrounding our car. Visibility was down to about 200 yards. Kel said he saw a bird hacking.

I consulted my map of North Carolina, laminated and folded for my convenience, found our location, and drew a line eastward with my finger. "We're directly west of the fire, that's why." I straightened in my seat. "It's clear south of the peninsula, maybe it'll be clear north of it. Let's keep going."

We did, but as the minutes passed, it became painfully clear that blasted smoke wasn't going to dissipate. When my husband picked up his inhaler, I knew it was time to go home.

"Left." The lack of enthusiasm was evident in my voice. I felt bad about that, but my husband understood. He's my heart, my Imzadi, and he sympathized with my disappointment without having to ask the source. With our upcoming schedule, it might be weeks before we could go exploring again.

It was noon. I'd consumed only juice and tea. We'd been on the road for about an hour and I was hungry. And when we turned onto 64 and I saw a sign that said "Rocky Mount 13 Miles" I was peeved. Rocky Mount is thirty minutes from our house!

We weren't in the mood to go home so soon after starting our adventure, but where could we go?

"That's west of us. The smoke is probably just as bad there."

We drove on for a few minutes. Kelley glanced at me. "What do you want to do?"

"Eat first, and then we'll decide."

We stopped at Cracker Barrel and ate lunch. Breakfast, really since I had blueberry pancakes and entirely too much iced tea, and Kelley had the Sunrise Sampler. Refreshed, revived, and ready to go, we jumped in the Hyundai and headed toward I-95.

"Where are we going?" Kelley asked.

Smoke clouded the sky and the air around us. Where could we go for relief? We discussed possibilities while the air conditioner cooled the car, and finally, we decided to run up to Virginia just so we could say we went.

Deciding to give Garmin another chance—after all, Virginia was just up the road, how lost could she get us?—I typed in the closest big city north of the VA border because, well, just because. The results surprised me.

"Kelley, Richmond is only an hour and a half away!"

It was the first "you're kidding" I would hear. After we crossed the border, I pulled out my good Atlas and started searching for destinations.

"Busch Gardens is only forty-six miles."

"Williamsburg is that close? Let's go."

"The drive home will be too long. KEL, Washington DC is three hours away!"

He looked at the map. Within seconds, he began plotting a trip to DC, followed by a stop in Chesapeake, VA, with a return home through the Dismal Swamp.

I love this man.

"By the way," he said after we discussed the trip, "where are we going?"

I looked at the stats on Garmin. Richmond was an hour away. Another glance at the atlas showed two potential outdoor destinations: Pocahontas State Park and Presquile National Wildlife Refuge. Since we like Wildlife Refuges—when they're not on fire—and because it was closer than Pocahontas, we chose the Refuge.

I tried to find Presquile on Garmin's menu. I couldn't. I searched for Turkey Island, which appeared to be part of Presquile NWR. I couldn't find it, either. So I settled on the closest landmark: Shirley Plantation.

And that's where fate stepped in.