To ensure that your state park experience is enjoyable, please be aware of the dynamic characteristics of the natural environment. There are some areas that may be potentially hazardous. All visitors should exercise caution when visiting any state park. Anyone who is unsure about possible hazards should contact a Park Ranger.
--Sign at Mountain Bridge Wilderness trailhead

Our hiking plans changed this weekend, so we chose another trail on the list: Coldsprings Branch in the Mountain Bridge Wilderness.

Months ago, the moderator of the CarolinasAdventures hiking group had provided excellent details on this trail. Unfortunately, I remembered only that there was a loop and that it was about five miles long. I also remembered strong suggestions that one not hike the Mountain Bridge Wilderness without a map. I'd downloaded one from the groups files section, but left it sitting on my desk.

Without that guide, we studied the map at the trailhead and noticed Coldsprings itself wasn't a loop, so we opted to hike to the end--that being the Middle Saluda--and then turn around. About a half mile into the hike, we found another display which showed Coldsprings intersecting with the Bill Kimball Trail, which led back to the spot where we now stood. It sounded good, so we took a picture of the display and went on our merry way. 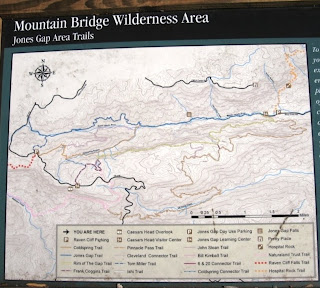 I need to back up a bit. As always, when we arrived at the trailhead, we filled out the hiker registration form. Under Trails To Be Hiked, we wrote Coldsprings since at that point, that's where we planned to go. We also neglected to include a emergency name and phone number.

Is someone keeping track of our mistakes? Good, let's continue.

The first section of the Coldsprings trail follows 276 southward, but a short distance later (so short we could still see our car parked on the side of the road) the trail turned onto an old road, which we followed for approximately .6 miles. At that point, the trail splits, with Coldsprings branching to the right, and Bill Kimball continuing straight ahead.

Like the Big Bend Trail we'd hiked the previous week, a thick layer of leaves that had been colorful just a few short weeks ago covered the trail. Though having to contend with the groundcover, which hid roots, rocks, and dips along the trail, we enjoyed hiking through this area. As mentioned in so many posts of late, with the leaves off the trees, we could see farther than we could during the blooming months. The sound of rushing water roared to our right, and we walked along, enjoying the view and the privacy. About a mile into the hike, I twisted my ankle on something hidden on the pathway. Judging by the pain, I pronounced it manageable, and after resting an appropriate amount of time (approximately two minutes), we continued on. Hey, I could handle it. After all, I'm a hiker.

There a Reason They Call it Coldsprings

About a mile and a half into the hike, the leaves changed from dry to wet, and soon after, we crossed over the first of many creek/stream/river crossings. At this point, I realized we had neglected to pack extra clothes. Consequently, we had to work harder to stay dry. In an attempt to be somewhat wise--though why start then, I didn't know--I removed my outer shirt and wrapped it over my shoulders. If I did fall, I would have something dry to put on. 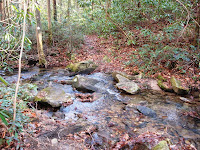 We crossed the first two or three streams without incident, but as we traveled, the streams became wider, and the stepping stones across the water further apart. I finally gave up and stepped into a shallow section of a stream and was pleased to discover the soles of my Salomon hiking shoes are so thick, and the seams sewn so tight, it kept the water out.

As we headed toward the fourth? fifth? creek crossing, I slipped on wet leaves and fell backwards. (Fortunately, I wear my pack so low, I landed on it instead of my rump. The only thing injured was the granola bar stored inside the pack. To my relief, the chocolate bar was undamaged.) Lesson learned: if a trail is named after water, prepare to encounter some. 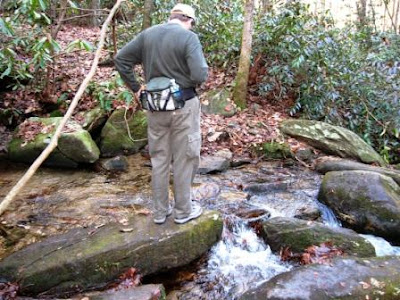 According to the map on the display, at the end of the trail, we should have found a .6 mile connector that led from the Coldsprings Branch Trail to the Middle Saluda River. While we saw a path, it was hardly half a mile. We took it anyway, but found we weren't in the mood to see more water, so we walked back to the beginning of the Bill Kimball trail, and took a short break.

Little did we know...

I had already read your Bill Kimball trail post so was interested in this one as well. The occasion of my reading the other post was that this past Saturday I went with a friend on a hike that included the Bill Kimball - we joked that it was named after him after his friends went with him on this trail and when they got finished they killed him. Our route was trail 2 from the parking lot to trail 1 and then to trail 3/5/3 back to the parking lot. We had no idea of the rock formation (El Lieutenant) we would get to see and were pleasantly surprised. We were looking for a challenging trail and were not disappointed. It was fun to re-live the experience by reading your account - very well done with great verbal imagery and good photos. Thanks for your effort.

Thanks, Carlton! I like your theory about Bill Kimball. What a hike that was! I'd love to do Coldsprings Branch again, but next time, I would backtrack instead of climbing the rocks on that mountain.

I'm glad you enjoyed the posts--my attempt to entertain and warn!