Coldspring Branch intersects Bill Kimball at a clearing near the Middle Saluda River, two and a half miles into the Mountain Bridge Wilderness. A small sign indicates camping is permitted there, and we saw what appeared to be a fire pit. We decided we wanted to go back in the spring, have a picnic lunch, and then return to the parking lot the way we came, because we never, ever, ever, ever want to hike the Bill Kimball trail again. 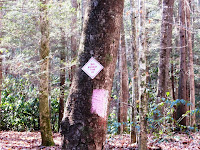 The trail at the Coldsprings/Bill Kimball junction is deceptively tranquil--and level. After a short repast of water and my undamaged Clif bar, we began the return trip to the car via the Bill Kimball trail, hiking along at a nice pace thanks to the second walking stick. We enjoyed the view of the valley we'd hiked into (hint, hint, hint) with the bubbling Middle Saluda River to our right and wispy rhododendrons lining our path to the left. At one point, Kelley stood at the top of a rise I had yet to traverse, and when I looked at him, I saw a tall peak in the background. I commented on how high it was. Little did I know....

Not long after, the trail veered left, up a steep rise, and I huffed and puffed and joked as we made our way upward. I took the lead a short time later and within minutes, had to stop when the "trail" suddenly ended. We searched for the pink blaze that would indicate we were on the Kimball trail. Kelley saw it off to our left. It was the first of three times that we would get turned around. Fortunately, we paid attention to our surroundings and quickly found our way back to the trail each time.

I was really surprised at how steep that hill was, and how long we stayed on it. Seems we missed the tiny lines and the even tinier 2400 on the map that indicated the elevation gain in this area. It felt never ending, and at one point, when I turned a corner and saw an even steeper slope, I called time out and drank one of my three bottles of Gatorade. Gosh that stuff really works. Within minutes, I was ready to go and we pushed forward.

And somehow, the trail became even steeper. 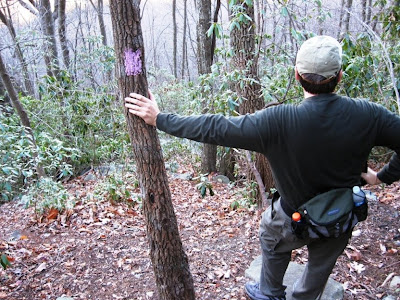 In broken, breathless words, I told my husband I would either have a heart attack or I would accidentally slip down the mountain on all those leaves. Meant it, too. Dry, dead leaves made the ascent so incredibly slippery, only the rocks and roots that created natural steps kept us from sliding down. At this point, one of us mentioned turning around and heading back to the car via Coldsprings. After a bit of discussion, we decided we were too far into the trail. And besides, how high could that hill go? 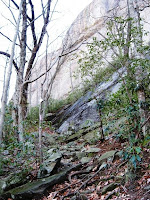 The path leveled a time or two, but we soon discovered we weren't near the top. We were simply preparing for the worst part of the hike--the rocky part. A sheer rock face parallel to the trail peeked through bare trees. Imagine our surprise when we walked straight toward it!

To our dismay, the dirt path gave way to large boulders. We carefully navigated through patches of slippery mulch on very narrow paths with steep descents beside it. I was so tired, and my body ached so bad that I no longer cared. And it didn't end. It just kept going.

"Please tell me that isn't the trail," I said soon after. Too tired to talk, my big, strong husband pointed to the blaze and shrugged. Then we saw the chain. 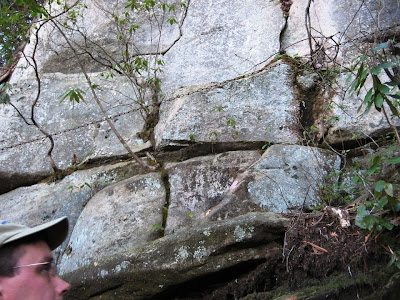 "Kelley, why is there a chain there?" He shrugged again and climbed up the four and a half foot boulder that stood between us and our destination. He reached down to help me, but I still had a hard time climbing up. I scraped my knee and my elbow in the process, but I made it and found out why the chain was there.

The trail was even steeper! 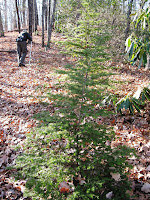 A short while later, Kelley shouted back (I'd fallen way behind by that time) with the good news we'd reached the top. He was wrong. Sometime after that, as the sun inched toward the horizon, we were still climbing. Finally, we reached a ridgeline. Bone tired, I trudged along, my two walking sticks dragging behind me as Kelley led the way. It was around three o'clock. Night would fall in a couple of hours and we had no idea how much trail remained.

As Kelley began discussing a camping plan, I remembered failing to include the Bill Kimball trail and an emergency number on the hiker registration form. I had a Cobra walkie talkie in my pack, but no jacket. Along with night would come the cold, so we hastened our pace.

I have no idea how long after that Kelley spotted a sign--the map we saw at the beginning of the hike! We only had a half mile or so to go. My whoo hoo! echoed through the hills.

I could barely walk by that time. My ankle was sore. I'd strained the hip that I hurt during our Georgetown/Pawley Island trip in August. My left knee hurt (I was wearing my knee brace on the right one) and my calves and arms--and back and lungs--ached. But I walked on as if I'd walked so long, my body didn't know what else to do.

Near the end of the trail, we opted to take 276 back to the car. The walking sticks served as crutches by this time, and I hobbled across the road to put the pink portion of our hiker registration form in the box. I called out to Kelley, who struggled to fold his body in the car, and asked for the time.

Three fifteen. We hiked the entire loop in three hours and forty minutes. How? I don't know.

I limped for days, and had to wear a wrist brace, an ankle brace, and my knee brace, but by golly, we did it. Yes, we made a few mistakes that we need to correct, but we did it. We hiked Bill Kimball.

I love how your posts are also stories. You keep me on the edge of my seat! This sounds like a difficult trail, to put it mildly. Yes...sore but proud:)

Thanks for the wonderful description. I enjoyed it very much.

One of my favorite walk in the woods is going down the Coldsprings Branch Trail to the Jones Gap and completing the loop by coming back on the Tom Miller Trail. Once I thought I would do something different and hike back on the Bill Kimble.

I don't think I was as beat up as you were after climb back, but that is one trail I have checked on my list as "been there, done that".

There many trails I hike over and over and perhaps I will do this one again someday too, but after two years I still have no desire to do the BK again.

I love the Coldpring Branch trail. I'd like to do it again, either turning back or hiking your suggested route. Bill Kimball is off my list!

My hiking group (CarolinasAdventures) couldn't believe I did it. And you'd think this experience would have taught us a lesson, but the Buckhorn Gap report indicates it didn't, not as we'd hoped, anyway. (Our enthusiasm for hiking sometimes gets us in a bit of trouble. Lessons I share hoping to help others avoid such problems along the trail.)

Thanks for your note. I'm glad the interview helped you find your way here. And I love your blog! I'm following it on Google Reader.