Don't ask me why, but we chose to walk through Congaree Swamp during mosquito season. We decided the mosquitoes probably weren't that bad given the recent rains and cooler temps (upper 80's that day). We were partially right. The bugs weren't a problem--until the end of our journey. 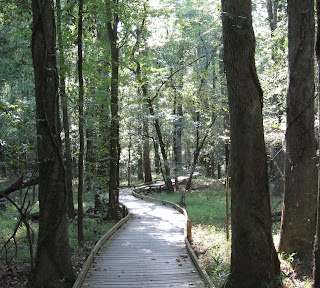 Home to the Congaree Indians until approximately 1700 when they were annihilated by smallpox, and then settled by the British sometime after that, the 22,000 acre spread known as Congaree National Park is the "last of the contiguous area of old-growth bottomland hardwood forest in the United States" according to the brochure handed to us by a helpful Park Ranger. (I'm really starting to like these people.) According to this same brochure, half of South Carolina was once a floodplain similar to that found in Congaree.

There are six trails at Congaree, the longest of which is the 11.7 Kingsnake Trail. We chose the 4.4 Weston Lake Loop, which begins at the Visitors Center, skirts Wise Lake, follows Cedar Creek's eastward course, cuts north toward Weston Lake at the Kingsnake Trail turnoff, and then ends at the opposite side of the boardwalk. Piece of cake.

Though the Park offers a guided tour along the boardwalk in the morning and afternoon, we opted to go it alone using the "Self-Guided Tour" brochure available at the Visitors Center. The boardwalk has a numbering system that corresponds to the numbers in the brochure, and using it, we read about the key role of the beech tree in American cuisine, the fact that muck is an actual substance, not merely a description, a bit about the bald cypress and tupelo trees, how switch cane (similar to bamboo but more akin to sugar care) changed the landscape in the swamp, and more. We used the brochure until we reached the Weston Lake Trail turnoff, then we headed into the far reaches of the swamp.

Just beyond the boardwalk, the trail changed from a newer wood construction to an older, spongier boardwalk, and then to level ground (or "Alligator-Level" as I called it.) Up until this point, the paths were wide and gave us a view of the dry, then muddy, finally swampy landscape through countless bald cypress, tupelo, cherrybark oak, and the magnificent loblolly pine. After we left the boardwalk, vegetation pressed in along the edge of the trail at times, providing only a close view of tall weeds.

There are plenty of gnarled trees, gruesome looking spiders, and adorable lizards at Congaree. We also saw two snakes, what I think is a long leaf pine savanna, several cardinal flowers, and a dozen or so turtles swimming around Weston Lake. We spotted a heron walking along the far side of the river bank, too far for my little camera to get a clear picture. I've heard wild pigs and much longer snakes live in the forest, and I'm pleased to say we didn't see either.

The entire swamp has a nice primeval feel to it. I half expected to see an Ewok or at least the creature from the Black Lagoon pop out of the rust-colored or black stained water, but the heavy quiet was broken only by the sporadic hammering of a woodpecker, the monkey-like squawk of a bird and the faint noise that sounded like breaking twigs as leaves floated from the sky to the rotting ground cover below.

Though the temperature had hit the 80's, humidity soon covered us with a thick layer of sweat that served as adhesive for every bit of grime we found along the way. The bug spray that we finally had to pull out enhanced that feeling, and before long, my clothing was plastered to me. So when we saw the Sims Trail, a road that runs parallel to the two North-South sections of the boardwalk (and which would decrease our journey by .3 miles) we took it. Bit of a mistake.

Did I mention the Skeeter Meter? It's a cute little meter posted at the Visitors Center that estimates the severity of the mosquitoes on a given day. On the day we went, it was between a 3 and 4--4 being severe, but nowhere near 6, aka, War Zone. Up to the moment we hit Sims Trail, the bugs attacked us only when we stopped for longer than a minute. Needless to say, we kept moving. Sims Trail proved to be a whole different matter.

Shortly after taking the trail, we ran into a swarm of the blood-sucking scavengers that we'd managed to avoid until then. Swatting did little to disperse the pests, though we tried it anyway, and though we were close to the Visitors Center, we doused ourselves with another round of bug spray. This only seemed to make the skeeters mad and they bombarded the poisonless portions of our bodies, dive-bombing our eyes, ears, noses, and lining the bone that ran alongside our forearm. We quickened our pace (judging by my time on the treadmill, I would have to estimate it at 3 mph) and pushed on, executing the little leeches as we went until finally, we reached the boardwalk and turned off. Suddenly, the bugs disappeared.

Moral of the story? If you go to Congaree in the summer, stay away from Sims Trail.

Congaree National Park is open seven days a week, 8:30 A.M – 5:00 P.M. Fishing is permitted anywhere except for Weston Lake. As of this writing, the Park offered free canoe tours on Sundays. Call two weeks in advance for reservations. And lest I forget…it doesn't cost a thing to get in to Congaree - this NPS Park is free. For more information, go to http://www.nps.gov/cong/index.htm