By the start of the third day of our vacation, we were feeling relaxed. Knowing we would have to leave the following morning, we took our time getting back on the road. It would be a short day, with few activities, but that was okay.

First stop: Hampton Plantation, a state historical site south of Georgetown on Rutledge Road. The entrance took us to a large parking lot bordered by a tangle of tall weeds and wildflowers on the left, and large oak trees on the right. A lone chimney stood just past the parking lot next to the restrooms and vending machines. To the right of it, a small walkway built over a smaller creek led to the house.

After exiting the car, we were instantly attacked by a horde of rather large mosquitoes, and my mind immediately fled to research I did for my first novel. Plantation owners left their plantations during the hot summer months because of these same pesky bugs! We doused ourselves with deet-laced spray and continued to the house. 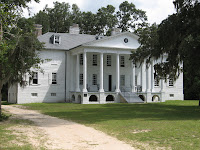 Originally owned by the Horry, the Pickney, and the Rutledge families, for all its grandeur on the outside, Hampton Plantation was surprising unattractive on the inside. After spotting the park ranger waiting to give the presentation, we threw down our four bucks each and took a tour of the house, marveling at the ugliness of the floors and bright colors, the angled edges of several doors and the overall feeling of small. It looked so big on the outside! I couldn't help thinking that Martin Brinegar's mountain cabin was built better than this place.

We tried to walk down to the river, located at the end of a path behind the house, to see the old rice fields on Hampton Island, but the mosquitoes in that quadrant seemed to have a taste for Deep Woods Off. Feeling confident that we knew all we wanted to know about the house, the layout of the land, and the large Oak tree George Washington saved (on the right in the photo above), we left and headed south.

The second and final stop before we went searching for a meal was Cape Romain. We couldn't go to Bulls Island this trip, but I could get a glimpse of a small portion of the Wildlife Refuge. After parking, we walked (rather, I hobbled) to the end of a wide, concrete pier that stretched over the marshes and into the channel. It was beautiful, and as I stood at the end of the pier gazing at the saltmarshes extending to the blue horizon, dolphins lazily breaking the surface of the water before disappearing again, and the seagulls and pipers flying around in slow circles, I knew without a doubt that I was in love with South Carolina. It sounded corny, even to me, and I couldn't fathom how someone could love a state, but I do and for the rest of my life I'll appreciate the time that we spent here. 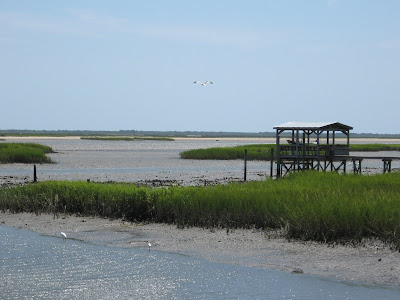 We drove to Murrells Inlet for supper, and after passing by Drunken Jack's seafood buffet, we spotted Flo's New Orleans Style Seafood. One of the few things I miss about Texas is the food, both Tex-Mex and Cajun, and if a plate at Flo's cost thirty bucks a person, I didn't care, we were going in.

I'll spare you the details of my reasonably priced crabcake Po' Boy and the delicious Roux-based red beans and rice, of our view of the inlet and the live Jazz music, and the novel inspiration I had that caused me to start scribbling away on a napkin while Kelley patiently waited. Sufficed to say, it was the perfect ending and we went back to the hotel, stopping to walk along the Georgetown Marina first, and kicked back for the rest of the evening. Though I've tried, I cannot find a decent end for this trip report other than to say I wouldn't have changed a thing.

Except for the hole that dog in my pants. I'm still trying to figure out what to do about that.
Posted by Kimberli
Email ThisBlogThis!Share to TwitterShare to FacebookShare to Pinterest
Labels: Cape Romain, Hampton Plantation, Murrells Inlet, NWR, SC Lowcountry