You would think suffering an injury at the beginning of a trip is a bad thing. While admittedly not preferable, this particular injury worked to our advantage. Already we'd been graced with a beautiful sunset and saved from hordes of mosquitoes, so after a light breakfast and a couple of Advils, we took off up Hwy 17 to find more treasures. 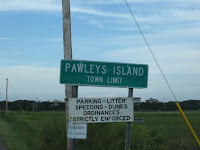 First stop: Pawleys Island. Granted, we visited the night before, but our short trip was focused on the south side of the island. This time, we wanted to explore the north point, and hopefully, find a road that would lead to other tiny islands the map claimed existed along the SC coast. We quickly learned that the north portion of the island was almost a mirror image of the south, sans public beach, and that such a road did not exist. In fact, there appeared to be only two roads on and off the island, both on the west side. If a hurricane heads toward the Carolinas, I hope the residents are give ample warning; I can't imagine everyone evacuating off those two tiny two-lane roads!

By the way, I follow the Pawleys Island PD on Twitter and just as the sign in the photo above indicates, the speed limit is strictly enforced!

Faintly frustrated, we crossed back to the mainland and jumped on Hwy 17, driving through upscale Litchfield and the cute shops along the road. Shortly after leaving that city, we saw a sign for Huntington State Park. Yes, Huntington! I cannot believe South Carolina has both a Hunting and a Huntington State Park, but they do, and fortunately, both accept the Annual State Park Pass. So we drove across the bridge over the marsh, and parked with the hopes of taking a quick sight-seeing tour.

But I couldn't do it. It was hot and humid and I hurt, and even with the help of my hiking stick, I knew I couldn't make it to the bridge, so we walked up to an overlook and looked out over the marsh. We saw flowers, marsh grass, water, big and small birds, trash, pluff mud, and oyster beds, and after taking a few pictures, we walked back to the car and drove toward the north side of the Park where we found another boardwalk and did the same thing. This time, the view included dozens of small fiddler crabs, which amused my husband. 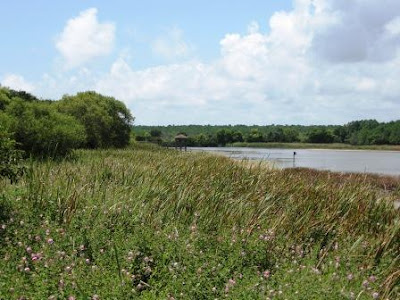 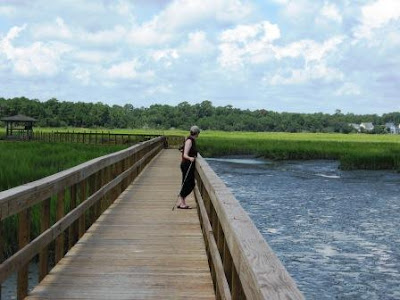 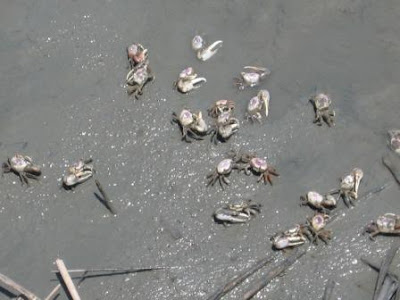 When I realize it was past time to take another Advil, we headed back to the car, back up Hwy 17…

And found the Seafood Capital of South Carolina!

Murrells Inlet, SC (pronounced Merle's Inlet) located on the southern tip of the Grand Strand in Georgetown County, is absolutely one of the cutest little coastal places we've seen. Just south of Myrtle Beach, though unstained by that…city, Murrells Inlet is what we women refer to as "darling!" Nestled along the marshy inlet, the portion of the town that runs along Business Hwy 17 is packed with seafood restaurants which, for some reason, fail to detract from the overall atmosphere. Only later would we learned about the marshwalk, the Veterans Pier, Brookgreen Gardens and more. Despite the view, and abundance of food, we continued on and made the mistake of driving through Myrtle Beach, aka Gatlinburg by the Sea.

The only thing I'll say about that place is that it's the only city in South Carolina that I dislike. Moving on.

Our next stop was North Myrtle Beach. If you're planning a trip to this area, research restaurants before going. Granted, they have seafood restaurants galore, but most are costly buffets. If you like plate after plate of crab legs, shrimp, and scallops, this may work for you, but the only crustacean I eat is crab mixed with bread crumbs and formed into a patty, and if I'm going to pay that much for just fish, I would prefer to buy a nice pole and catch it myself. Besides, limping as I was, I needed a restaurant where the waiter would bring the food to me in exchange for a gratuity. But the walk from the entrance to our table was long, so we stayed.

Though disgusted after watching Kelley tear apart crab legs, we drove on. Consulting the map for our next destination, my eyes instinctively lifted toward the North Carolina border where I noticed several rows of faint, squiggly lines. Tilting my head to the side to read the faint print beside it, a slow smile spread across my face when I saw what was written there: Green Swamp. And we were heading toward it.

I was elated. After hearing so much about Green Swamp from my hiking group, I knew it was a place we needed to go, and here it was, just a short drive away. I didn't have to convince Kelley, and soon, Green Swamp became our final destination for the day.

I have to admit that I'm a bit confused. With a name like Green Swamp, one would think a swamp would be somewhere in the vicinity. If so, we didn't see it, nor did we see an official entrance. We found a parking lot—after passing by it, turning around, and then backing up when we passed it again. Immediately after leaving the car, we saw a venus-fly-trap looking plant, small wildflowers, and long stalks with white button heads that I think are hatpins. I wasn't surprised since it was a biological preserve. I was surprised later when Kelley pointed to a patch of yellow and said, "That looks familiar." Within minutes, we were looking at pitcher plants. 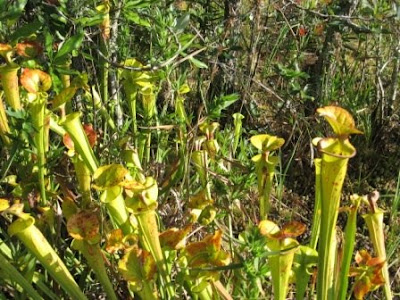 We stayed awhile, searching for botanical treasures, contemplating a hike to the other side of the preserve. But at this point, the sun was shining through the trees across the street and we knew it was time to go.

Next Post: Now we know why residents left during the summer, PPLLEEASSSEEE tell me I finally found it, and Kimberli falls in love–again.
Posted by Kimberli
Email ThisBlogThis!Share to TwitterShare to FacebookShare to Pinterest
Labels: Green Swamp, Huntington State Park, Murrells Inlet, Pawleys Island