Georgetown - A Character City, so claims the water tower on the southern outskirts of that town. The logo is apt, for in one sense, Georgetown is a charming, historic town nestled along the water south of Myrtle Beach, but it is also a town forced to adjust to a new life after the rice plantations of old were destroyed by war and hurricanes. Like most Carolina communities, Georgetown adapted by enticing other industry, though it now exists in relative obscurity.

We arrived around two-thirty, approximately four and a half hours after we left Greenville. The mills and factories just south of town concerned us, but worries flew out the car window when we saw our hotel near the intercoastal bridge, located on the banks of the Great Pee Dee River where it runs into the Winyah Bay. 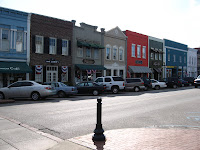 After settling into our room (which had a view of the marina), we drove to the historic district for dinner. Though small, downtown Georgetown was about as nice as any we've seen in SC, and much less crowded. After finding an empty parking spot on Front Street, we went to the Dogwood Cafe and ate Po' Boys on the back deck, which was built above, and overlooks, the Sampit River. Afterwards, we strolled down the Harborwalk, the boardwalk that runs behind the shops.

It was early, so we decided to scout out Pawleys Island. Though we've never been there, we'd heard about it by virtue of the famous Pawleys Island Hammock and from a few recommendations of people who knew people who had been there.

The drive up Hwy 17 was short, perhaps eleven miles from Georgetown, and we were soon crossing a bridge over marshes toward the thin island that prides itself for being "arrogantly shabby". Though it is what I call sleepy, the island is charming. Typically-coastal beach houses line what few roads exist, private piers extend into the marshes, and the entire island is gloriously absent of hotels, traffic, and tourist shops selling little plastic palm trees, tee shirts and boogie boards. Though we were there on a Friday night, Pawleys was quiet, and a fabulous place to be. 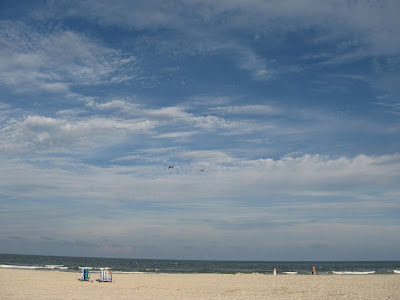 After driving around a bit, we found the public beach, parked, and began strolling across the beach hand in hand, sometimes wading in the warm water, other times walking across dry sand. It was as romantic as it was relaxing, and we thoroughly enjoyed ourselves. Until I met Savannah.

I'll spare you the details of my encounter with the six-month-old Golden Retriever. Sufficed to say I injured my hip, an event that changed the course of our vacation—oddly, for the better.

When it happened, we were on our way to the parking lot to head to parts unknown, though I wanted to watch the sunset. But Kelley was ready to move on in the comfort of the air conditioned car. Unable to make it to the parking lot, we sat on the beach to rest and ended up staying until the riotous pinks and golds turned into a dark gray. 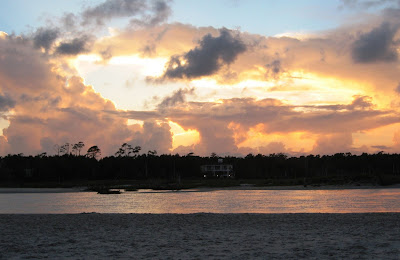 After an uncomfortable night, I realized our trip to Bulls Island, where we would spend the day hiking and exploring the island, was ruined. As it turns out, this was a good thing. As I lay cringing in pain, my husband read an article that mentioned the multitude of blood-sucking insects present on Bulls Island that time of year, which make life difficult, if not miserable, for visitors. I carefully stood up, winced and said, "Okay, how about going north on Hwy 17? I think we can find a few places there that we can see from the car. Where's the Advil?"

And so began our newly routed trip.

Next Post: The Seafood Capital of SC, and Ohhhh, Let's Go There!
Posted by Kimberli
Email ThisBlogThis!Share to TwitterShare to FacebookShare to Pinterest
Labels: Georgetown, Pawleys Island