Like Landsford Canal State Park in SC and the NC Zoo, Morrow Mountain is one of those "far" places we put off visiting until we could spend the night in the area. But last week, I was craving a mountain hike, so we packed up and took a long drive.

Morrow Mountain is nestled in a curve along the western edge of the Uhwarrie Forest, separated from the forest by the Yadkin/Pee Dee Rivers. It's in the Piedmont where mountains shouldn't exist. But North Carolina has several "little mountains" as the host of Exploring North Carolina called them. Mountains outside of the mountain range. This is due to the fact that NC is made up of strips of land called terranes. In short, the foothills of the Blue Ridge was once the original edge of North America, but additional land masses collided into that edge, forming the Old North State, as seen here in this USGS image:

When things collide, one or both sides buckle, creating folds. Water eroded much of the land in these folds, but erosion-resistant rock remained in some places, leaving behind peaks such as Pilot, Medoc, and Morrow Mountain. Consequently, elevated views exist in the Piedmont. 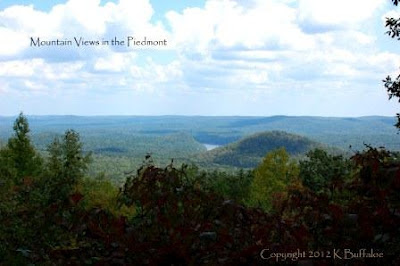 That erosion-resistant rock is the second reason Morrow Mountain is special. It has (rather, it is) an abundance of rock, including ryolite, rock with grains so small, they're undetectable to the eye. 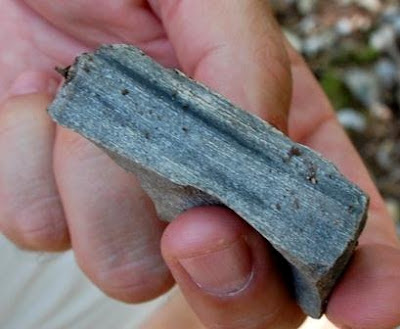 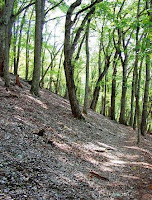 Natives such as the Pee Dee tribe hauled the resilient rock down the mountain to other locations where they converted the stone into arrowheads or tools. Evidence of that activity still exist throughout the park. In addition to the presence of an ancient quarry, chips and shards litter the mountain side, including the Mountain Loop Trail near a summit that offers a breathtaking view of Lake Tillery.

Morrow Mountain has fourteen trails, three of which are bridle, though hiking is permitted on each at the time of this writing. The trails range from .6 to 9 miles, and from easy to strenuous. A boat ramp is available for those who would like to boat along the Yadkin. Rowboats and canoes are available for rental, as are cabins. Check the park's website for fees and availability.

As we quickly learned, Morrow Mountain is worth the drive. For more information, go to www.ncparks.gov/Visit/parks/momo/main.php

Thanks, Kathy. I've known for awhile, but I've been dreading the task.