In the northwest quadrant of the Great Smoky Mountains, west of the Sugarlands Visitor Center, in the Tennessee side of the park, is an anomaly. A pit in the mountains. Grassy lowlands surrounded by jagged peaks.

Members of my hiking group, CarolinasAdventures, have talked about it for years, and while I'd seen photos, I couldn't envision the valley in its entirety or understand why visitors gushed over the place. So when we started making plans to spend a few days in the mountains, I suggested the Smokies and the meadow known as Cades Cove.

According to several sources, Cherokees once hunted in this valley, and settlers moved in around 1820. Evidence of the latter still can be seen in the form of several churches atop small knolls, and empty cabins tucked in the pine and hemlock forest.

To get there, visitors travel down a sometimes treacherously narrow, winding two-lane road bordered by a river with bubbling cascades on one side, and a rock face on the other. After descending to the base of the peaks, guests pass through a gate and begin an eleven-mile journey along a one-lane loop that skirts a grassy meadow. 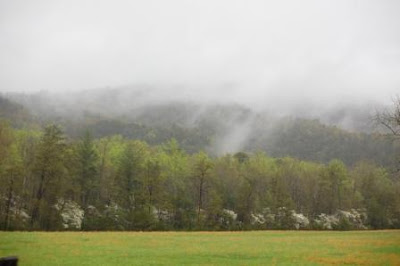 Though cars sometime travel bumper-to-bumper, and visitors stroll down dirt paths to hike a trail or meander around old homesteads, the cove still manages to maintain a certain serenity. Here, deer graze in close proximity to humans and turkeys hold up traffic to cross the road. Here, as I'm told, bears wander in search of food. Despite the bears, it is easy to imagine this place was once a place a peace. 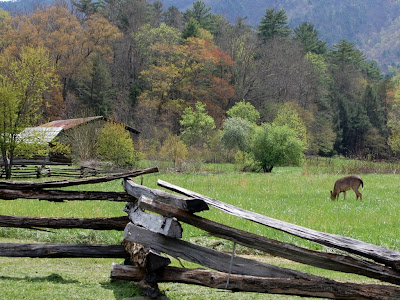 In addition to a campground, several trails extend from Cades Cove. At least two of which lead to a waterfall. We visited Crooked Arm Cascade during our visit, though we were dismayed to discover the only way to get a good view of the falls is to slip down the side of a steep slope. However, with Abrams Falls nearby, and cascades located off the road to Cades Cove, there's plenty to see.

We didn't limit our explorations to sightseeing. While at the visitor center, we picked up a small field guide called Waterfalls of the Smokies, and while my husband drove, I read. From it, I learned which falls were located in which part of the park, but I also learned that the "arm" in Crooked Arms cascades doesn't refer to a limb, but to a ridge.That explained the waterfall.

More important, I learned that the floor of Cades Cove is made up of the highly-erodible limestone, which is how a grassy lowlands came to exist in the midst of a mountain chain.

Though we drove to Cades Cove twice during our time in the Smokies, we plan to return during future visits. To spend a night at the campground and explore trails on foot. As others before us have discovered, there is something special about this place. As silly as it sounds, something that touches an inner yearning.

For more information on Cades Cove, visit www.nps.gov/grsm/planyourvisit/cadescove.htm Or better yet, spend some time there. Photos and text can't do the place justice. Just don't feed the bears.

To view the pictures we took in and around Cades Cove, click on the photo below. 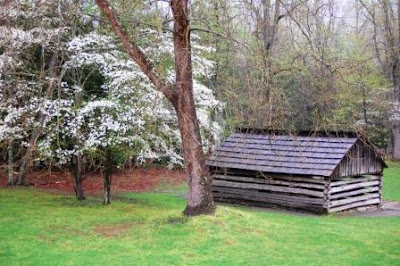