We recently took a scouting trip to Uwharrie National Forest to learn the layout and enjoy a beautiful autumn day.

Named for the Uwharrie Mountains and acquired by the government during the Great Depression, Uwharrie is one of four national forests in North Carolina. It's situated in the Piedmont, south of Asheboro and west of the North Carolina Zoo. Tucked in a curve on the forest's western boundary is Morrow Mountain State Park.

Our GPS led us to a completely useless spot just inside the eastern edge of the forest, near what appeared to be a charming town named Troy. After consulting the Gazetteer, we headed north on 109, but stopped at a parking lot several miles up the road. This turned out to be one of three trailheads for the 20.5 Uwharrie Trail, which cuts a swath across the forest.

We didn't have the time or the stamina to hike the entire trail on this day, nor did we have a map, available at the ranger station down the road, according to the kiosk at the trailhead. We did, however, take an hour-long trek over a dirt path embedded with rocks, roots and even quartz in what turned out to be a pleasant walk in the woods. Sunlight streamed through autumn-tinted leaves, some on trees, some littering the ground, and we strolled to a creek where we found several Hearts-a-Burstings. 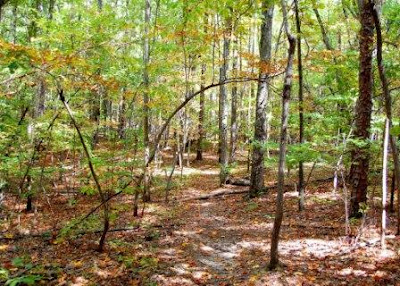 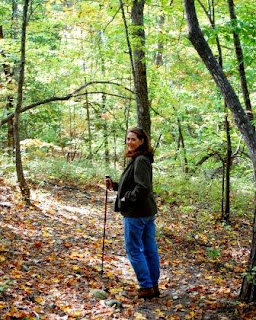 Trail near the creek: 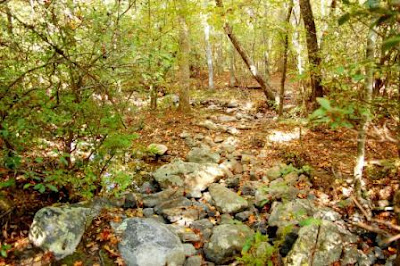 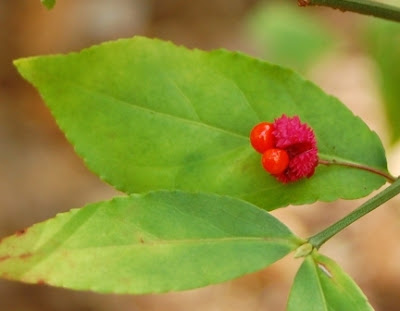 On the subject of flowers, we spotted the following species of sunflower growing alongside the road. Did we find the endangered Schweitzer's Sunflower, known to grow in the Uwharrie Forest, or one of its cousins? 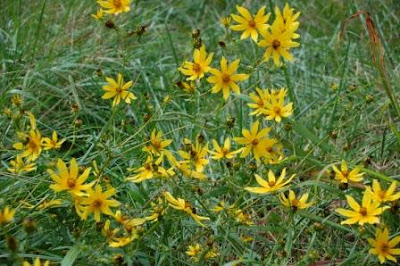 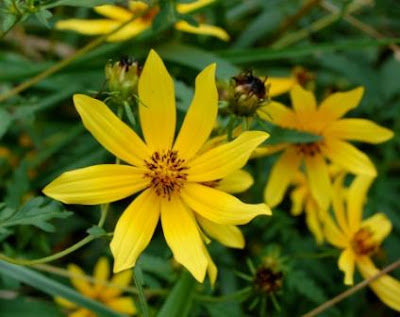 We finished our hike, but instead of backtracking through Troy, we headed north on 109 to NC 49, one of North Carolina's official scenic drives, and soon found more destinations to explore.

Last year, one of my Sylvan Heights posts caught the attention of the NC Zoo director. He not only invited us to the zoo, he suggested we check out Birkhead Wilderness, located in the northern region of the Uwharrie National Forest. Our zoo trip is a bit overdue thanks to unexpected travel and 100+ temperatures this past summer, but on this trip, we spotted the turnoff for the 5,100 acre Birkhead Wilderness. So many trails, too little time! We put it on the growing lists of places to visit, and continued on, but made a quick turn when we saw the sign for Pisgah Covered Bridge.

A member of our hiking group first told us about this historic structure. Several sources state the Pisgah Covered Bridge is only one of two covered bridges left in North Carolina. Once badly damaged, the bridge was refurbished thanks to efforts initiated by the NC Zoo and Zoo Society. Today, visitors can picnic near the creek or stroll along the hiking trail in what we found to be a picturesque setting. 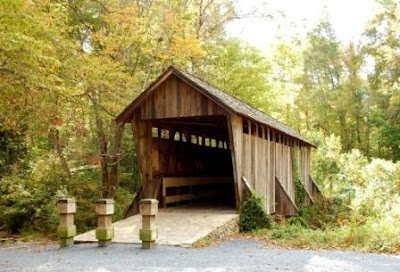 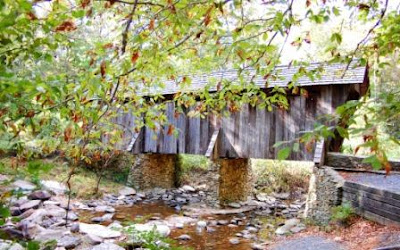 A must see if you're in the area.

There are several trails to explore in Uwharrie National Forest, Birkhead Wilderness, and nearby Morrow Mountain State Park, and that's not even counting the hike through the NC Zoo. In short, there's plenty to do in the Asheboro area.

And I once called the Piedmont the land between me and the mountains? I stand corrected.

So back we'll go, and soon. Not to explore more of Uwharrie's interior, not yet anyway. We're finally taking that overdue trip to the zoo. But we won't be alone. Accompanying us on the excursion will be a group of siblings who have fast grown dear to our hearts. More soon.

For more information on Uwharrie Forest, activities and trails, go to www.cs.unca.edu/nfsnc/recreation/uwharrie/index.htm

Cooler weather is certainly the time to hike in the Uwharries. I hiked there a couple of times in summer and came out each time with ticks crawling all over me. Can't stand those varmints.

When things cool off enough, I want to make the short drive over to the Birkhead Mountains Wilderness to go hiking in there. But certainly not until I think the ticks have died down.

Mosquitoes and ticks are the reason we waited. We stayed on the trail for an hour and left without stowaways, so I'm encourage.

Have a great time in Birkhead. I look forward to seeing those photos!

This is a beautiful account of a beautiful place. I love how even when you take me to places I "know," I find out that there is much I did not know.

I also enjoyed the links. I remember the Pisgah Bridge had been vandalized in the past, but I didn't realize it had been damaged from a flash flood. I'm so glad it is being refurbished.

The pictures are great. I love the Hearts-a-Bursting. Isn't that an awesome name? Your yellow flowers look a lot like the Schweitzer's Sunflowers on the link. I'm curious to know if you ever find out if they are Schweitzer's.

Thanks again for another wonderful hike down Carolina Trails!

Thanks, Julie! This was new territory for us. I had no idea there was so much to explore in the area. It's on the list now, though!

Friend and creator of Scenic NC identified the sunflower as a Bidens (common) but as you read in the post, the Schweitzer's does grow in Uwharrie Forest. I'd love to find them! Next time, perhaps.

I'm glad you enjoyed the post. If y'all decide to run down and check out Morrow Mountain, let me know!