New Bern, Murrells Inlet, Charleston, Greenville (SC), and the Blue Ridge Parkway are a few of our favorite Carolina destinations. We visit when we can, to explore and to soak up the beauty that makes each of those places unique. But when I need a hideaway, a place to decompress after a conference or a long stretch without a vacation, we head off the beaten track to the unassuming coastal town of Beaufort, South Carolina.

Resting on a curve of a river by the same name, Beaufort (pronounced "Bu-ford" in SC, according to the nice police officer who didn't arrest me for playfully slapping my husband after he said "I told you so") is somewhat centered in a cluster of sea islands situated between Charleston and Savannah. Within that cluster, Parris Island sits to the southwest, and Hunting Island, the southeast. While not technically within the ACE Basin's boundaries, Beaufort was a must stop on our ACE tour. 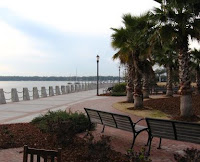 With fat palm trees, tendrils of moss hanging from old oaks, tidal creeks visible from various streets, hotels and restaurants, shops, a charming downtown lined with attractive stores and homes, carriage rides, and boats lounging in the harbor near the waterfront park off Bay Street, Beaufort is an exotic getaway with the creature comforts of home. And my word, you should see the place in spring. Pink, red and white azaleas compete with an abundance of tulip magnolias that bloom throughout the city. It's breathtaking.

It isn't bad during the rest of the year, either:


Though we've visited Beaufort several times, we've yet to explore the winding backwaters of the Lowcountry. When I tweeted our intentions to visit the city, a fellow Twitterer recommended kayaking. Lack of time and the heavy rain that fell shortly after our arrival dashed that hope. Next time.

Conveniently located near the ACE Basin, Hunting Island, and Parris Island, Beaufort is less than an hour from Hilton Head, and about one hour from Savannah, GA. For more information on Beaufort, including a bit about their history, go to www.beaufortsc.org/ and www.beaufort-sc.com/history/
Posted by Kimberli
Email ThisBlogThis!Share to TwitterShare to FacebookShare to Pinterest
Labels: ACE Basin, Beaufort SC, SC Lowcountry