We enjoyed our trips to Hunting Island State Park and Beaufort, but we had much to learn on this adventure, and I hoped to do that at the ACE National Wildlife Refuge. 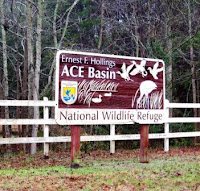 Unfortunately, the day after we arrived in the Lowcountry, the sky burst open and a deluge drenched an already soaked land. Several low-lying areas around the Carolinas were either under a flood watch, or experienced flooding. Consequently, when we arrived at the refuge's Visitors Center, we encountered locked doors (apparently, they weren't expecting visitors on a cold rainy day in January. Clearly, they don't know us.) We also noticed deep mud puddles dotting the dirt roads. Without the Durango, we didn't have the clearance or the four-wheel drive necessary to tackle that hurdle.

Not that it helped us in the past...

I wish I could have walked inside the Visitors Center. From preliminary research on the Basin, I learned a South Carolina treasure is hidden in the heart of the refuge, and the pictures didn't prepare me for the sight of a historic plantation house surrounded by enormous moss-laced oak trees. 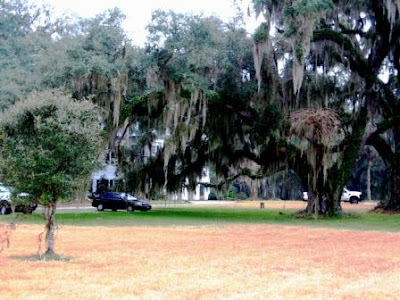 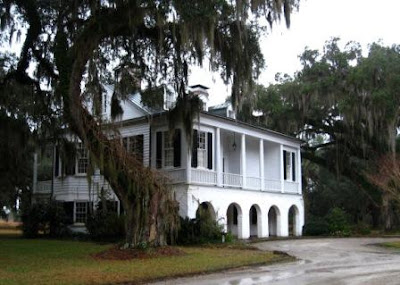 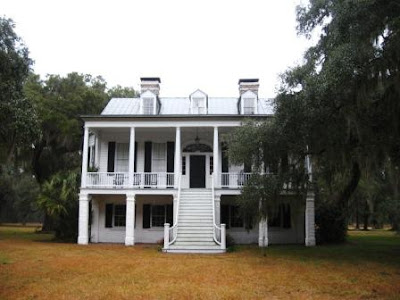 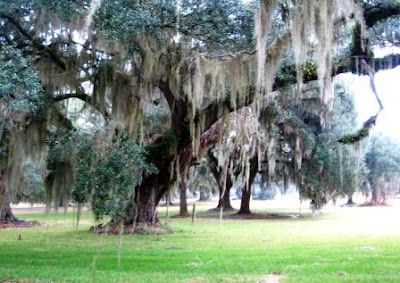 I love old plantations. Not for the tragic history they often represent, but because of the architectural wonders they usually are, and Grove Plantation House is a beauty. Surrounded by dozens of those majestic oak trees, it's one of those sights you need to see in person to appreciate. European ownership of this area dates back to the days of, or just after, the Lord's Proprietors. The land was originally granted in 1694. However, according to the refuge's website, the house was built in 1828.

I also had to get inside to get my hands on much needed brochures. Detailed information on the refuge is hard to find. It's mentioned in Coastal South Carolina, but I learned little more than wildlife, including numerous endangered species, live within its 11,000 acres.

Unable to glean facts from a field trip, I had to turn to the Internet. The primary sources I found (aka, the refuge's website!) indicate the refuge is a great place for birding, hunting and fishing (see website for information, restrictions and any applicable fees). A trail map shows numerous paths suitable for touring the refuge on foot, several of which skirt ponds.

NOTE: Summer and early autumn are NOT the time to go hiking through Lowcountry woods, thanks to ticks and mosquitoes. Without personally checking it out, I can only assume the best times to visit are spring and late fall, and in the winter on a clear day.

The ACE Basin National Wildlife Refuge consists of two units, the Edisto Unit, which is located near Adam's Run, and the Combehee Unit, located off River Road near its intersection with Hwy 17A. For more information, including directions, check out the following websites: 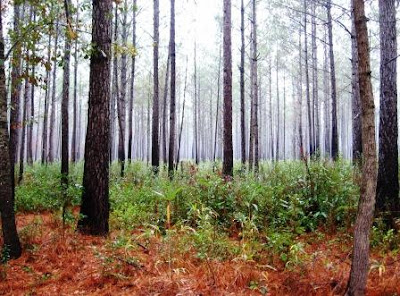 -------------------
Copyright 2010. Do not use or distribute text or photos.
Posted by Kimberli
Email ThisBlogThis!Share to TwitterShare to FacebookShare to Pinterest
Labels: ACE Basin, Hiking Trails (SC), NWR, SC Lowcountry

The photographs are like art. You take beautiful pictures! ;)

Thanks, Ginny! And these photos don't do justice to the place. I was having issues with my Nikon, so I had to use the little point and shoot. A challenge considering the lighting that rainy day.

It's a beautiful place. I long to see more of it.

I agree with Ginny H! Those oak trees with the hanging moss are magnificent. I was wondering how you were doing on your trips with all the rain we've had lately. It looks very successful!

Thanks, Julie! Oh, you should have seen us that day. You would have laughed. Rain poured from the sky, limiting visibility at times. I kept shaking my head and asking "Why are we doing this?"

But we were there, and it was one of the few times we had two days off in a row, so we had to try. I'm sure anyone at the refuge who saw us thought we were nuts (though we're wondering why they didn't open the blang door!) As you can see from the photos, it was worth the effort.