Back to the Bays

...highest quality examples of a peat-filled Carolina bay complex over the global range of this geological feature

...one of the most diverse natural areas in the North Carolina Coastal Plain, with 11 different natural community types

...one of the very best examples

...Five rare plants and four rare animals have been found in the natural area

I could do this all day, because I'm only on page two of the NC Heritage Trust Fund's 2005 report that discusses the area we recently visited--Carolina Bay-pocked Bladen County, located in the southern portion of North Carolina's coastal plain.

I discussed what I knew of the mysterious Bays in my Lake Waccamaw post, so I won't repeat it here. In short, Bladen County is covered with them, and if you look at a map, you'll see several in the form of lakes. And that was our goal on this particular journey.

But first, lunch, and for that, we went to Elizabethtown. Though small by Charlotte's, Asheville's, and Raleigh's standards, Elizabethtown is big enough to detour to while in the area if you're in need of food or contact with civilization. We ate at the Corner Cafe, located on the corner of Broad and Poplar. It's clean, and the cuisine is simple, but it's decent and the prices aren't bad. While there, we learned about the push to renovate downtown Elizabethtown. Always a laudable goal!

Also while downtown, we passed a historical marker that in the split second we saw it, indicated something big had happened in E-Town during the Revolutionary War. I know major battles had been fought in ENC during the War Between the States, but this is the first I'd heard about fights between local Whigs and Tories. I scrounged around and found the following excellent links:

On to the bays. Our first stop was Jones Lake State Park, just north of Elizabethtown. From the strip-mall size parking lot, we walked across a sandy trail (bypassing the sidewalk to the Visitors Center) and headed to the oval shoreline. A short pier stretched past a small beach to a marina sitting in the tannish waters of the Bay: 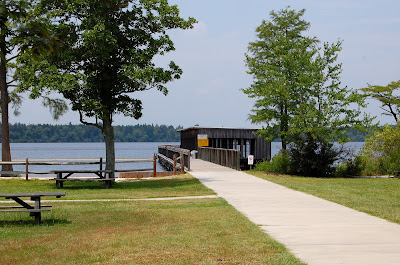 And that's about it. Despite the fact it was a Friday afternoon in mid-July, we didn't see a soul. Not even a boat or canoe that's supposedly available for rent. A lone beach ball played bumper pool with itself in a small alcove near the bank, but that was it until two other tourists walked on the scene. We didn't spot a sign indicating the lake was closed for any reason. So where was everyone? It was hot that day!

There are a couple of short (three miles or so, total) hiking trails at Jones Lake State Park. One leads to adjacent Carolina Bay, Salters Lake, which we later learned requires a permit to enter. To our surprise, Exploring North Carolina's Natural Areas indicates bears inhabit this area.
Come to think of it, that may explain the lack of visitors....
Our next stop was White Lake, just west of Elizabethtown. Where Jones Lake looked abandoned, White Lake could barely be seen through the cramped rows of houses and trailer homes surrounding it. We finally found an entrance to a pavilion area, and we pulled in to take a look. In addition to a couple of shops, we found a pier and a ton of people. Apparently, White Lake is the place to go: 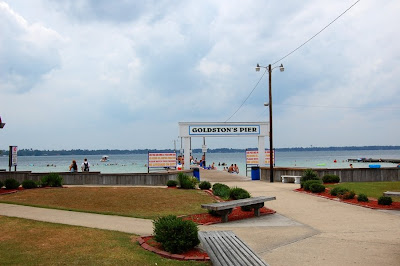 Other Bays in this area: Beside Lake Waccamaw, located to the south, Singletary Lake and Bay Tree Lake, both State Parks, Little Singletary Lake, and Peterson Lake. Not all are accessible. At least one requires a permit.
We enjoy visiting the Bays, and we hope to learn more about them, and the plant and animal life these unique formations host. They're worth the visit, and the research. Here's a few more pictures from our trip:

I love that you included history with this post. Fascinating links! My bookmarks are getting quite long. Lol!

My sister is big on White Lake (she has three kids, and I'm sure it's nice for a fun day), but I prefer the areas with fewer people. I can't wait to check out Jones Lake. The other bays sound great, too. The slide show is beautiful. Thank you, Kimberli!

Thanks, Julie! I'm ever so slowly learning more about the Bays, but I need to break down and take a geology class. They're quite interesting, and I'm amazed that these unique formations have turned into gathering spots.

Yes, White Lake seems to be the place to go. That's understandable given the businesses nearby. But I'm like you, give me someplace quiet--as long as I'm not sharing that space with bears and alligators!

Kimberli, I love how you always go to the places I've been curious about too! I almost don't need to leave the house. Bay Tree Lake and Singletary Lake State Park are also in that area. Been meaning to check them all out.

Hi Karen, and thanks! We enjoy sharing our (far too short) glimpses of the Carolinas with others. I'm glad you enjoyed the post, and hope you're able to visit the bays soon.

Be sure and ask the rangers if bears have been spotted in the area. I'm glad I read that before we set out for Salters Lake!