Like Phelps Lake, Lake Mattamuskeet, Alligator Lake (aka, New Lake) and the three lakes in Croatan National Forest, Pungo Lake is a pocosin lake, which means it's surrounded by thickets consisting mainly of short bay trees and shrubs with Latin names I can't pronounce. To give it a decidedly southern touch, Magnolia virginiana, or Sweetbay magnolia, grows in the midst.

In addition to being a pocosin, and possibly a Carolina Bay (the lake is elliptical like a bay), the 12,000 acres of what's referred to as the Pungo Unit is also a haven for wintering waterfowl. Thousands of ducks, geese, and swans—and I mean about 50,000 more than the number that just popped in your head—winter at Pungo. I understand that during the warmer months, black bears can also be spotted when they leave the protective confines of the woods to feed.

That's why, when the Navy decided to build an Outlying Landing Field within miles of the Pungo Unit, coastal NC residents went berserk. And I mean berserk in a good way. A grassroot organization instantly sprang up to defend the waterfowl. NO OLF signs appeared in store windows and in front yards. The case went to court. After a long fight for the birds, the birds won. In January of 2008, the Navy changed its mind.

But I promise you, there's still some fancy flying going on out there: 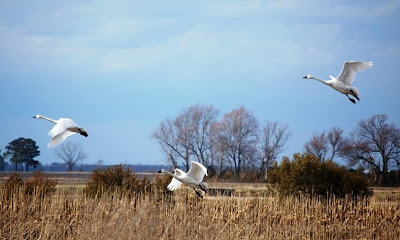 As I mentioned in my previous post, we finally found the lake, but of course, we spotted only about a half dozen swans floating around. During an informative conversation with Gail and Steve, bird enthusiasts we met on the way to Pungo, we learned migrating waterfowl are all but gone by March. Along with a time frame to return next season, Gail suggested the best place to find those elusive snow geese is Pea Island National Wildlife Refuge, located on the Outer Banks. Indeed, a month or so before this we'd spotted a couple of white feathered fowl floating around the marshes near the Pea Island Visitor's Center before rain sent us home. In a voice filled with a sadness I've come to understand, Gail told us the number of snow geese has diminished greatly over the past decade. Once they "were all over, and walking in the road". But no more.

We spent some time there, enjoying the lake despite the high winds that day, and chatting with Gail and Steve. Then we left to find the second access road I spotted through Google Earth. We found it, but it was "Closed for Research". Since it appears a sandbar extends into the lake at that point, we'll return later and check it out.

Other Pungo facts:
After spending time enjoying the scenery, looking for birds, and chatting, we said our goodbyes. Steve and Gail left to find New Lake (Alligator Lake on some atlases) and we followed the road alongside Pungo, photographing mallards and a few other duck species as we went. Wouldn't you know it, we ended up at the same spot we stopped at last fall. 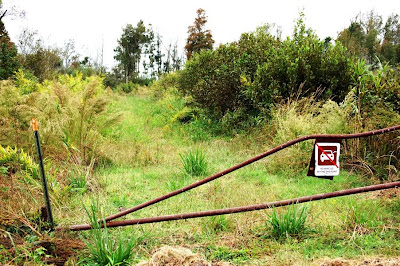 But we found the lake, and that's what's important. Another good day along the ENC coast.

Pungo Lake is a great destinations for birders and naturalists. If you're interested in seeing the lake, especially during the winter, grab a good atlas and match it up to these basic directions:

From the west: Travel Hwy 264 to Pantego. Left on 99, Right on 45, Left on Hyde Park Canal. When the pavement ends, keep on going until you hit the lake. If the road is closed like it was on the day we visited, turn left on the dirt road, travel about two miles, then turn right at the refuge sign. Turn right again at the end of that dirt road, and when you reach the dirt intersection, turn left over the stone culvert that crosses over the canal and go until you hit the lake.
Yes, it can be that confusing. Again, use caution.

I was reading Part I when some neighbors dropped in. During their visit, I was just about to bust to get back here and read the rest. So, I started telling them about your blog and asked if they wanted to see it. Now you have two more fans!

Kimberli, every time I read one of your posts, I think it's my favorite. Then another one comes along that's just as excellent. Your writing style is exciting, and your pictures are so beautiful! I should have made this comment on Part I, but those cloud formations look like I can reach out and touch them.

You go beyond travel writing. You have a way of making the places you visit come to life. I can't wait to go! Thanks for all of the great information.

Thanks, Julie. I love the Carolinas and so appreciate the beauty and the mysteries hidden in each state, and I guess it shows. Thanks for the encouragement.

Winter is the best time to visit Pungo. Not only because of the lack of bugs, but because those thousands of waterfowl should be in the area and (from what everyone has told me) watching them rise over the lake or above a field is awesome. We plan on visiting in December, and then again in January in the hopes of spotting the snow geese.