Though we've visited Savannah several times in the last few years and have learned much about that city's history and culture, we decided to take a guided tour during a recent visit to expand our knowledge and, like hunters seeking pirate treasure, to search for sights unknown. To this end, I picked up a brochure for Oglethorpe Tours at our hotel. The promise of a 90-minute excursion for $10.00 a person grabbed me, so off we went to check it out.

As has become our custom, we parked in the public garage at Abercorn and Bryan Street. This garage is a half block from Bay Street, which runs parallel to River Street and the Savannah River. It's convenient and therefore, considering the cost of parking meters and the strain on ones feet, cost effective.

We walked to Bay Street, where I realized I failed to memorize the departure point. A quick call to directory assistance connected me to the company, and the driver offered to rendezvous with us at Johnson Square. I'm still trying to decide if that was a good decision. As it turns out, Oglethorpe Tours will transport you anywhere you want to go in the Historic District after the tour is over. In addition, if you need transportation within the district later in the day, you can call the company and they'll shuttle you (service ends at 5:30 PM.) So when we boarded the windowless trolley at Johnson Square, we were boarding at the end of the tour when the driver was dropping people off. We didn't arrive at the Visitor's Center--where the tour begins, folks--for another half hour.

On the upside, it began to rain during that time, and we saw parts of Savannah we didn't know existed in relative comfort as we snaked our way down narrow streets. More on the rain later, so keep reading.

We'd taken a carriage tour of Savannah on the occasion of our first trip to the setting of the infamous Midnight in the Garden of Good and Evil, and in addition to learning about Savannah's history, we received a great overview of the city. I was curious to see if this tour would differ, and if so, how.

While our guide took us to the standard stops: the Green-Meldrim house, where Sherman stayed during the Savannah leg of his March to the Sea; the home of Girl Scout founder, Juliette Gordon Low; the Mercer home; Colonial Cemetery, and more, she also took us to City Market, which we somehow missed on previous visits, and nearby Franklin Square, home of the Haitian Memorial, erected to honor the Haitians who fought in the Revolutionary War. We also saw an evangelist get arrested (lower left):

Freedom of speech and religion as long as you have a permit, eh? Soon after, we saw the Pirates House and heard the story of how the buccaneers shanghaied young men using tunnels and impressed them into the pirate life. We saw much, and the tour was definitely worth the money, but one of the most fascinating aspects of the trip was our guide herself, Margie.

Margie isn't an export. She's pure Savannah, and if you've done a bit of reading on the city, you'll know quaint of the eccentric kind isn't just the style, it seems to a requirement. As that quaintness makes Savannah more interesting, so did Margie lend a more unique element to our tour. She's gregarious. She's hilarious. And she's also terrified of thunderstorms, so you can imagine how she felt when a storm cell passed directly over the city in the middle of the tour.

While researching small towns in the southern Louisiana area for my first, a.k.a. practice novel, Marching to Zion, I came across one of those stories about a southern lady who faced down a union commander who demanded she leave her home so he could destroy it. I think that lil' ol' steel magnolia gave the commander a piece of her mind served with a side of sweet potatoes.

I'm proud to say our darling, southern-stock Margie was no different. While cloud to ground lightning bolts zinged nearby, knocking out power in some places, Margie's trembling hand pointed to the old dueling grounds near Colonial Cemetery. When thunder blasted overhead, she pulled the trolley off the road in front of the old Telfair Hospital, counted to ten, and then proceeded to give us several detailed stories about Mary Telfair and her sister, Margaret, and Mary's philanthropic work in Savannah. The storm raged overhead, but Margie shook her fists at it (after she covered her ears with them) and rallied on. I'd have to take another tour to be sure, but because of her determination, I think we received twice the information we would have on another tour, or with another guide. So Margie, if you're reading this, thanks for making our trip to Savannah memorable. 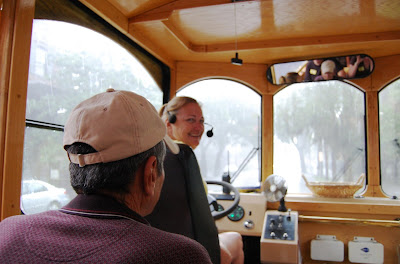 As I mentioned earlier, the trolley is windowless to give you an unimpeded view of the city. However, it is equipped with clear sheets attached to the roof, which we unrolled and secured to the side of the vehicle so we could continue the tour in the rain. We got a bit wet before that though, as did the seats, which Margie happily dried for us.

According to their website, Oglethorpe Tours offers three different excursion. They have a variety of stops throughout the Historic District, and again, the tours are only $10.00 per person. Well worth the money, especially if Margie is your guide.

For more information on Oglethorpe Tours, go to their website at
http://oglethorpetours.com/

For photos of our previous, drier trip to Savannah, click here.

This is a lovely article, Kimberli. I want to go to Savannah right now. The Haitian statues are interesting, too. And the guide.

Another thing that I can't get over is the evangelist getting arrested. Huh???? Is that what the world is coming to? Unfortunately, it looks that way. Sorry...I get riled up over freedom of religion and speech issues.

But a very nice post. Thanks for sharing your adventures with us.

Thanks, Julie. Savannah is a lovely place. I wish we could visit more often. I also wish I knew the reason behind the arrest. We watched the police officer cuff the man. Both officer and arrestee appeared to be polite and orderly, so I have no idea what was up.

I once gave a speech about prayer and include the story about a group of young people who were arrested for praying around the American flag at school. One would think that since schools teach American History and consequently, the freedoms that make (made?) this country unique, throwing people in jail for practicing those freedom was just a tab hypocritical. But that's me.

I hope there was another reason for this arrest.