"as for the wild spontaneous flowers of (the Carolinas), Nature has been so liberal that I cannot name one tenth part of the valuable ones" --John Lawson, 1709*

Pleaching-intertwining branches to form a hedge

Naturalists who traveled through the Carolinas in the 18th century*:
Mark Catesby
Andre Michaux
John Lawson

John Lawson—Londoner, botanist, appointed as Surveyor to North Carolina and sailed to Charleston, SC around 1700. Kept a journal of his trip in which he provided an in-depth look at the land and life in Carolina before the Colonial period. John recorded detailed information on many subjects such as plants, Indians, ecosystems, and animals. Helped Baron Christoph von Graffenried found New Bern. Was captured by Indians while on a surveying mission up the Neuse River. He is believed to have been tortured and then killed.

~~*~*~~
Tryon Palace in New Bern is one of those "must see" tourist places. An imposing three-story Georgian home built around 1770, it is a sight. Arched, covered porches, which reach outward as if hugging visitors, connect the house with a kitchen on one side and a carriage house on the other. The original mansion was home to the governor of the "first capital of the North Carolina colony". The building burned down in 1798, and a movement began in the 1940's to restore the palace, which involved removing 50 buildings constructed around the site over the years, and rerouting Hwy 70. The new building was opened in 1959. 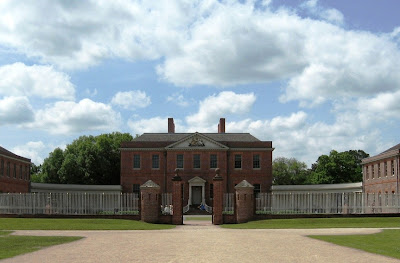 Though the mansion is open to the public for a fee of $15.00 per person, we passed on the opportunity to see the interior to head to our real target: the gardens.

According to Tryon Palace's brochure, over 200 years of gardening history is represented in the six gardens located on either side of the mansion. Still neophytes when it comes to flowers, we missed that fact as we walked the grounds, but we saw much that justified the $8.00 per person Garden Tour entry fee. 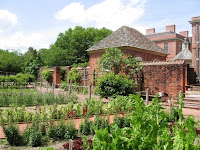 The gardens located directly to the sides of the house are separated and surrounded by red brick walls. The gardens just beyond those, which form the east and west boundaries of the spacious, neatly trimmed South Lawn, are less formal and, as the brochure states, contains native specimens. It's important to note that what visitors see now may not accurately represent the original gardens. Architects had very little of the original plans to work with during renovation, so, as I understand it, they strove to represent plants, gardens, and gardening practices typical of the late 1700's while still including native NC plants.

We started in the Kitchen Garden, which didn't seem terribly exciting to me, but it turned out to be aesthetically pleasing. I was impressed with their use of space. Vine fruits, veggies, and seasonings are grown in one area in keeping with Colonial times, and often in the same plot of dirt. Also practical, yaupon and what we think are grapes are grown along the edges of the garden. For those of us who can't identify plants, most rows were labeled so we knew what was growing where.

Next, we explored the Kellenberger Gardens, an enclosed, semi-formal garden containing a variety of colorful blossoms. Here we found foxglove, violets, false indigo, and several other flowers whose IDs we couldn't read. An attractive garden, the high walls and slightly arched entranced evoked memories of The Door in the Wall, an old favorite of mine which I hadn't thought about in years.

Behind the Kellenberger, bordering the South Lawn to the street, is the untamed Wilderness Garden. With its tall, shady trees, dirt paths, benches, and gazebo, this is a lovely spot to stroll, sit and read, or just rest. 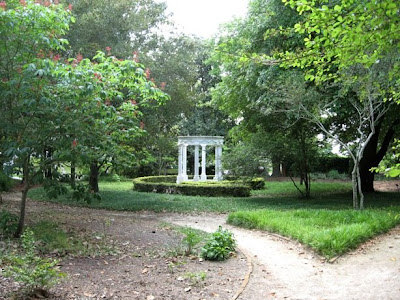 As part of Tryon Palace's efforts to accurately portray Colonial life, employees must dress in period costume, so it isn't unusual to see women walking around in long, apron covered dresses wearing hats, and men wearing tights. We found one such man sitting by a lean-to in the lonely South Lawn. A nearby sign said, "John Lawson". It wasn't until I saw a copy of New Voyage to Carolina in the gift shop that I understood the actor was playing THE John Lawson, the doomed botanist/explorer we'd learned about during our visit to historic Bath. I later read this is part of the "Early Naturalists Account of the People, Flora & Fauna of the Carolinas" exhibit at Tryon Palace, which opened on May 1st, and will run until March 2009. 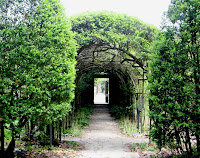 An interesting bit about the gardens along the allees (avenues) on the opposite side of the house: yaupon is pleached, or intertwined to form hedges and a canopy over the walkway. Visitors will also see an orderly formal garden consisting of trimmed yaupon hedges planted in an attractive scroll design. Four statues representing the seasons watch over this garden, bringing a Greco flavor to Tryon Palace. 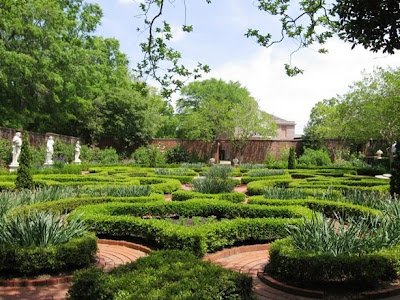 The last garden on our rounds was the Green Garden, a floral garden placed where it could be seen from the house. After that, we stopped in the Carriage House and the kitchen, located in front of the mansion, and then in the gift shop, conveniently located on the grounds. Overall a pleasant trip and a neat lesson in North Carolina's botanical history.

For more information on Tryon Palace, go to www.tryonpalace.org/