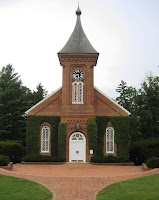 Greetings from the Shenandoah Valley! The trip from the Upstate went well despite running into a bit of rain. We had hoped to arrive in Waynesboro early enough to visit the National Park, but a glance at the map showed we were too close to the Virginia Military Institute to pass it by, so we stopped in Lexington and took a few shots of Thomas "Stonewall" Jackson's house, his final resting place, and a butterfly who wouldn't leave my car until we took its picture. Next stop was Washington & Lee University where we tried to visit Robert E Lee's grave. Not only were we too late (it closes at 5:00 P.M.) but someone was getting married in the chapel.

We're planning on exploring a bit in the area before we begin the drive down the parkway.

Day 2
Started in the 1935 and completed in the mid-1980's, the Blue Ridge Parkway meanders over the river and through the woods--and at times, along the edge of mountains. Distance is marked out in miles, with Milepost 0 starting at the south edge of the Shenandoah National Park in Virginia, to Milepost 469.1 in the Great Smoky Mountains.

The original plan was to go directly to the parkway on Saturday morning, but with Shenandoah National Park so close, we couldn't resist spending a bit of time there before heading out. Ironically, the previous evening I read the chapter in Bill Bryson's, A Walk in the Woods, that discussed his passage through this particular spot. After reading about the relatively level terrain of the AT in this area, we had to spend some quality time on the trail.

We hiked a mile (two if you count the trip back to the car) but it was enough to drench us in an humidity-induced sweat, give us the sense of pride at having accomplished that feat, and supply us with some bragging rights. After cooling off in a blessed breeze, we hopped back in the car, headed south on Skyline Drive, and finally hit Blue Ridge Parkway at Milepost 0. 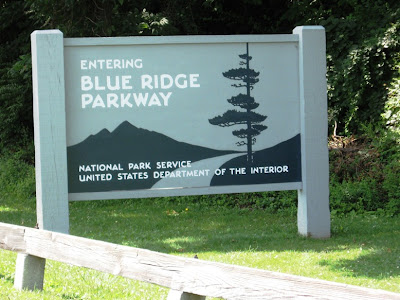 The second we entered the parkway, Kelley asked me to take over the wheel. I knew he needed a break, but it put me in a bit of a snit (translated: silent and slightly unlovable) until I realized being in control of the brakes was a good thing. We've overlooked too many wildflowers for far too long. Now, with them in bloom everywhere, it seemed a great time to make up for that slight.
I slowed to thirty miles per hour and enjoyed the drive.

Fortunately, it didn't take Kelley long to get into the spirit of the adventure. Soon, he began spotting flowers growing along the parkway: 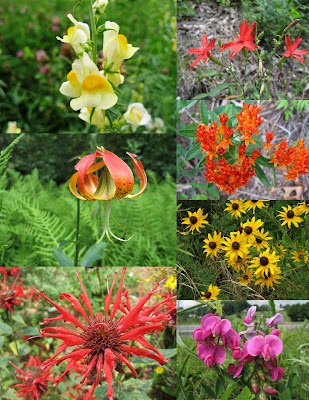 Such a glorious bounty! But what were they? We stopped at the Visitor's Center to purchase a wildflower book so we could attempt to identify the species. Before getting back into the car, Kelley politely offered to drive. I politely declined and got behind the wheel.

The parkway was unusually empty, and after an hour (and only a distance of about thirty miles) we began to think of the road as our own. We stopped, sometimes in the middle of the street, sometimes on the shoulder, and took pictures of flowers or animals that Kelley spotted. Our first long stop was Yankee Horse Ridge (MP 34.4.) where we took pictures of the logging rail and Wigwam Falls. 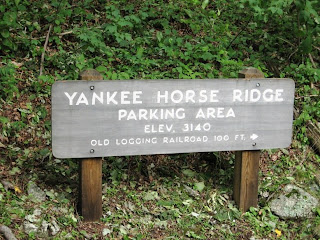 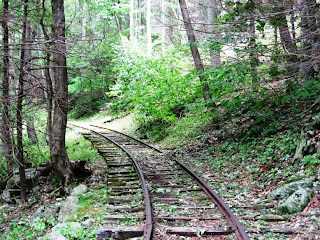 Because of the angles, the falls was too difficult to photograph. We left when a woman old enough to know better walked to the top of the falls via algae covered rocks (please don't do that.) Kelley again offered to drive. I smiled sweetly and slipped behind the wheel as I told him no.

There was an amazing lack of people on the parkway, which surprised us. But not as much as the number of deer and other animals we saw along the way. By day's end, we counted nineteen deer (one buck, eighteen does, and four fawns), four groundhogs, two rabbits (one who thought he was hiding from us in a tall patch of grass), one wild turkey, and one box turtle. That, and identifying plants such as Staghorn Sumac, Fraser Magnolias and other flowers, made the trip worth it.

Well, the views helped, too: 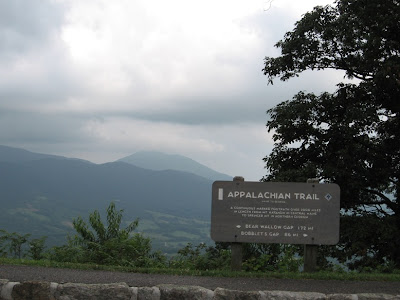 Two hours and only sixty miles down the road, we stopped at Otter Creek to eat. This is a nice, rustic (in a good way) establishment on the banks of Otter Creek. Fronting a forest and a campground, it's a bit nicer than the restaurant at Mt. Mitchell, but not as nice as Mt. Pisgah. But we were hungry and in need of sweet tea. After we finished lunch, Kelley firmly suggested he drive. I protested since he was the one spotting the flowers, but he assured me it wouldn't be a problem. Since he reached the car before I did (drat the effects of too much tea!) I graciously accepted his offer.

Imagine my surprise when, after he took off at forty-five miles per second, he was still spotting flowers!!!! I was absolutely amazed. The next morning, when he found a cluster of chicory blooms in a field, I asked him how he was doing it. He reminded me his job required him to spot a single cancerous, or even mildly suspicious, cell on a slide filled with millions of cells. Spotting a little wildflower from the car was nothing. I was impressed.

So we continued on, at a much faster rate, finding flowers such as evening primrose, what we later found out were Carolina lilies (looks like a Turk's Cap but is a darker red) and even a peach tree growing on a rock face alongside the parkway. The brakes began squeaking around three o'clock, but we continued on.

We stopped in Roanoke, VA for gas. In hindsight, we should have spent the night there, but with two hours of daylight left, we thought we had plenty of time to get to Fancy Gap, where we would get off and head to Mt. Airy. I was wrong. We barely made it to Mabry Mill before night fell. The next twenty or so miles of the parkway was lost in the dark.