The goal for this trip was to drive the Blue Ridge Parkway from MilePost 0, to NC 321, where we left the Parkway on our last trip. The day before, we traveled from the Shenandoah National Forest to Fancy Gap, VA where we left the parkway and spent the night in Mt. Airy, NC.

Day 3
We found ourselves backtracking on I-77. The previous evening, night had fallen before we reached one of the parkway's beloved attractions, Mabry Mill. We'd seen the picturesque mill in numerous photos, and hated missing out on it. But going backward meant hurrying later on down the road. So we opted to use it as an excuse for a return trip.

And thus, we began the last leg of our journey.

I neglected to mention that before we left the Upstate, we purchased the Guide to the Blue Ridge Parkway, by Logue, Logue, and Blouin (sounds like a law firm, no?) I really like this book. In addition to providing a general map, a parkway bloom calendar, and a list of trailheads with milepost number and difficulty level, the book takes readers from overlook to overlook, providing details of each, even if there were few details to share. With this book in hand, our conversation along the Parkway often went as such:

"What's the next overlook?"
"72.6, Terrapin Mountain, so named because it resembles a terrapin."
Kelley pulled the car to a stop. Silence. "It doesn't look a thing like a terrapin."
"Well, that's what it says."
"Well, they're wrong."

The book was our traveling companion throughout the trip, and let us know when we were coming up on a decent stop, such as Wigwam Falls at Yankee Horse Ridge (MP 34.4) or that we missed the trailhead down to Cascades Falls (MP 271.9) because we had a small lapse of memory and forgot to consult it. It was also our guide to eating establishments, and since we didn't bring so much as a crumb of food, we really appreciated that feature. Around three in the afternoon, we stopped at the Doughton Park Concession area (MP 241.1) and ate lunch.

As Parkway restaurants go, this is probably the bottom of the list. The folks were friendly and the restaurant clean (though it lacked a clean feel), but the Mel's Diner look inside and the tight, tight quarters going into the bathroom ranks it below Mt. Mitchell. My turkey sandwich and green beans were good, though, and Kelley's chicken tenders were decent as well, so I can't complain.

Before we stopped at Doughton, we made what was supposed to be short visit to Brinegar Cabin. We ended up staying for the next half hour or so. Originally, I wanted to look around the area, snap a few pictures, and then leave, but Kelley suggested we go into the cabin. Going into the cabin was the last thing I wanted to do. What was in there, an old chair and a loom? So what? It was a cabin, and probably looked the same on the inside as it did on the outside, but since he-who-finds-flowers wanted to go in, in we went.

And were immediately met by a park ranger.

She was wearing a smile that said, "Oh good, people to talk to" and in an instant, I knew: the woman had a presentation. I was right, and without giving us time to escape, she stood up, opened her mouth, and launched into the life of Martin and Carolyn Brinegar. I was hooked. 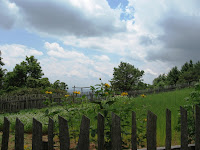 The cabin was amazing. It was sturdy, well built, efficient, and had a great view of the mountains. We learned how the loom and the spinning wheel works. Discovered the differences between weaving wool and linen (I actually touched sheep wool.) Met the legacy of Carolyn Brinegar. Found out how the family dried their food, and learned a little about life in the mountains in the early 1900's. It was fascinating, and I was so glad we stayed. The next time I hear a reference to those poor, illiterate, uneducated mountain people, I'll think of Martin Brinegar's engineering, and the patience that allowed Carolyn to make clothing from scratch. Incredible.

We hopped off the Parkway at NC 321, the spot we reached northward on our last parkway outing, and headed home. though we missed some parkway trails and waterfalls, the journey down the parkway was one of the most fascinating and enjoyable outings we had since moving east. I highly recommend it to all who are thinking about going.

For more information on the Blue Ridge Parkway, or to check on construction or weather closures, go to www.nps.gov/blri.

Note: Commercial vehicles are not permitted to drive on the parkway, so you won't have to contend with eighteen wheelers or farm machinery. Yet another reason to take America's favorite drive.< 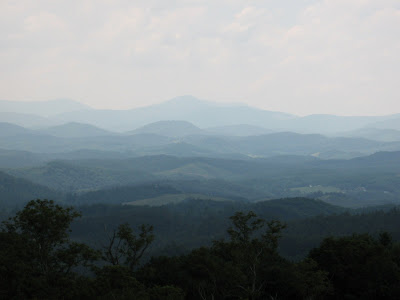