Nestled in tall peaks at the southern terminus of the Smoky Mountains where the Oconaluftee River flows, is a land once occupied by a people whose right to occupy it permanently was later won harder than the nation in which it was formed.

Our first visit to this area was in the early 1990s. We had driven to Clingman's Dome and curious as to what lay on the other side of the great mountain range, we continued on. I remember little of what we discovered was a reservation. Just a teepee on the side of the road and a shop where my husband purchased a knife he still uses. Minutes later, we left and for the first time, drove along the Blue Ridge Parkway, which begins on Hwy 441 just south of the Smokies.

Over a decade later, we moved back to South Carolina, and as I had during our first residency in that state, I devoured as much history as I could.

Once again, Cherokee crossed my path. This time in, Bushwackers, by William R. Trotter. Certainly I had learned about the Trail of Tears in school, but this beautifully-written book of the bloody War of Secession in the Blue Ridge Mountains reminded me of, and expanded on, what I had learned. I read about the Cherokee Nation, of those who escaped the forced relocation, and those who later fought in Thomas's Legion, and the fight to create a reservation on land once occupied by the Cherokee.

Years later--just a month ago--I downloaded The History of the Upper County of South Carolina by John H. Logan. In it, Logan mentions several Indian nations, but he focuses on the Cherokee in particular, painting them not as the mystical people they're too often viewed as today, but as people. Noble and strong, but as people who went about their business in a way different to what the settlers were accustomed. An astute and beautiful people, who, among other tasks, hunted and fished, built structures from logs, and "who made gloves and shoes" from the hides of panther. People who wronged and were wronged. Who routinely slaughtered and who were slaughtered. Of everything I had read to date, Logan (and at times Bartram, who Logan quotes) put a face on the Cherokee people.

Suddenly, Cherokee was everywhere: in my readings, in recent news articles, and featured on various This Day in North Carolina History posts. So when I extended our upcoming vacation to Bryson City by a day, I booked a room in Cherokee.

Cherokee, NC is located within what is called the Qualla Boundary, the tract of land that is the Cherokee reservation. The tourist influence is evident in shops that sell crafts, pottery, and moccasins, though the casino presence was far more obscure than I had expected. But with a thick forest and nearby peaks, there is a beauty here. Long cane still grows along the river as it did before the settlers arrived, and the clear water of the Oconaluftee still swirls over boulders in a shallow flow. Those these days, you'll likely find locals and tourists riding down the river on colorful, inflatable tubes.

Cherokee is ideally located at the southern boundary of both the Smoky Mountains and the Blue Ridge Parkway, and it's one of the gateways to Bryson City. The people of Cherokee invite you to visit the Oconaluftee Village, where descendants of those who escaped the Trail of Tears present the Cherokee way of life as it was hundreds of years ago. The outdoor drama, Unto these Hills, presents their heartache of the Trail of Tears. You'll also find a golf course, fishing, and Mingo and Soco Falls.

Cherokee welcomes visitors. They invite people to come and enjoy this beautiful region they call home, to learn about their heritage and to know at the end of the day, this is still the land of the Cherokee. 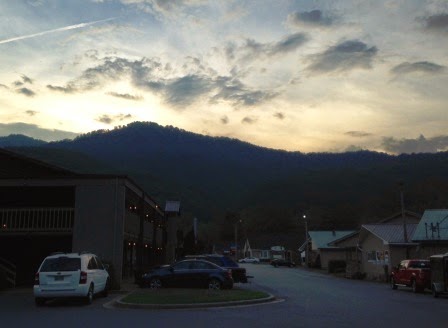 A big shout out to Tanya for her assistance on this trip, and for the great conversations we had about the Cherokee.
Posted by Kimberli
Email ThisBlogThis!Share to TwitterShare to FacebookShare to Pinterest
Labels: Cherokee, Mingo Falls, Oconaluftee, Soco Falls, tubing, waterfalls, Western NC

Thanks, Kathy. It feels like a different world over there, doesn't it? So peaceful and serene. We really enjoyed it.

I love NC and have spent a lot of time in the Asheville area. Now I can find other places to visit. I always love your photos, Kimberli!

Thanks, Ane. I do love taking those pics.

I think you would enjoy Cherokee and Bryson City. They make for a nice getaway, close to the Smokies and waterfalls. A beautiful area. Ridgecrest barely touches it.