Though I focus on towns and trails in this blog, during visits to Carolina destinations, we spend a lot of time in or around historical churches. The Carolinas are rich in Christian history, and architectural wonders still exist in both states. Charleston's St. Philip's and St. Michaels are just two examples in South Carolina. In North Carolina, among others, we have First Presbyterian Church in New Bern, which dates back to the early 1800s.

To explain the historical significance of First Pres, and a bit about the architecture, I turned the blog over to my husband, Kelley, a pastor and D.Min student at Erskine Seminary, located in Due West, South Carolina.

What a remarkable surprise to find this historic church in New Bern. We have traveled there many times, but did not know about this church's existence. 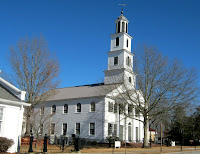 To begin, according to literature, First Presbyterian Church of New Bern was chartered in 1817, with the building constructed in 1819 and finished in 1821. I was surprise to learn the organizing pastor was John Witherspoon. This John Witherspoon was the grandson of the great signer of the Declaration of Independence, also named John Witherspoon--the only clergyman to have signed that historic document. Certainly, this was a fascinating discovery, but the history doesn't stop there. Of the thirteen founding members of this congregation, two were directly related to America's greatest theologian, Jonathan Edwards, the third president of Princeton Seminary: Edward's daughter Eunice Edwards Hunt, and his granddaughter, Frances Pollock Devereux. Inside the sanctuary, you will find dedication plaques on all four walls.

Another interesting tidbit, during the War Between the States (Civil War) this church was used as a hospital.

When you first drive up to First Pres, you will immediately be impressed by its beauty. It is a striking white building with Corinthian columns in the front, supporting the classic-style pediment, with a prominent steeple directly above. The church was built in the style of St. Martin-in-the-Fields, of London, and is listed on the National Register of Historic Places. It is also an American Presbyterian and Reformed Historical Site, and is one of the oldest Presbyterian churches still in use in the US.

As you enter the church, you will pass through the vestibule, and then go through the doors leading into the sanctuary. Once inside, you will see the multiple rows of beautiful white pews extending to the far wall. Note the clear windows. This not only allowed sunlight to shine in a room once devoid of electricity, but, in churches with adjoining cemeteries, provided a view of the burial ground to remind people of the fragility of life.

As you look up, you will see a large pipe organ centered in the gallery above, which semi-circles the room. 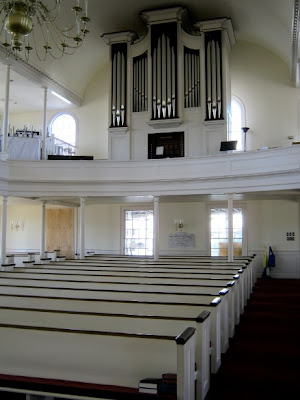 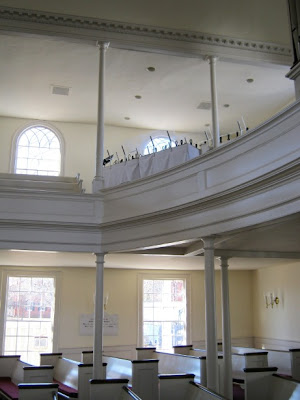 The choir loft is located on the upper left. Originally, the choir was not placed behind the pulpit or even near it, but was away and out of view, in order to assist the singing of the congregation, instead of being a performance.

If you look to your right or left, depending on which side you enter the sanctuary, you will see a large pulpit. 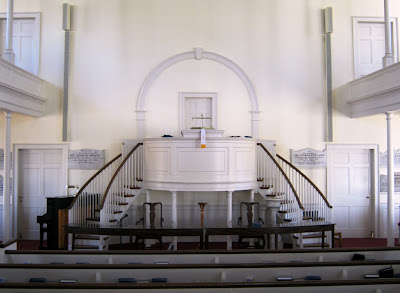 In order to enter this pulpit, one must ascend a number of steps. This is a reminder that the congregation sits under the authority of the Word of God.

The interior of this church is reminiscent of Independent Presbyterian Church in Savannah, which is another beautiful and historically significant church calling for your attention.

This is fantastic! I did not know about the church...or its interesting history. It is so beautiful. Yet again, I am amazed at how much there is to see and learn about our state. Thank you very much!

We've been to New Bern numerous times and had never heard of it. Makes me wonder what else I'm missing!

I look forward to visiting this church when I do my genealogical research this summer. Thank you for the information. Also found out that there was an African American woman that was with the original founders of the church.

Hi Yvette. If you've never visited New Bern, I'm sure you'll love the city and the church. Both are beautiful. Thanks for the information on the founder. Do you know her name? There were several though my husband only listed a few.

Enjoy your trip and your research. Thanks for stopping by!