I made a mistake in my Waterfalling in Western NC post. At the end, I said I would discuss one waterfall the Piedmont has to offer because originally, I thought Stone Mountain was a remnant of the Sauretown Range along with Pilot Mountain and Hanging Rock. Its proximity to the Blue Ridge Parkway and Doughton Park was the first clue to the contrary, one I determined to figure out later along with why we couldn't spot it from a distance. But a good look at a map shows Stone Mountain is located in the northwest portion of North Carolina, and, according to exploring north carolina's natural areas, at the edge of the Blue Ridge Escarpment.

If you're not familiar with this geological feature, the escarpment is a sudden drop-off of the Blue Ridge Mountains, evident in several areas, including Caesars Head in South Carolina. For a three-dimensional rendering, click here.

Stone Mountain—named such because it's just that, a stone mountain—lies at the base of the escarpment and is unique because its surface is smooth instead of jagged or covered with vegetation. That begged the question: why does a dome as bald as Patrick Stewart's head exist in an area thick with trees? 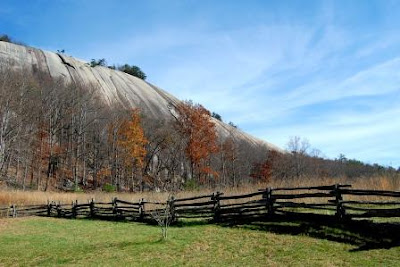 Shortly after we began exploring the Carolinas, I learned that, to understand these states, one must study the land. Understandably, I put it off. After all, geology is a difficult subject. But our visit to Pilot Mountain dredged up the subject, and recently, I purchased Exploring the Geology of the Carolinas: A Field Guide to Favorite Places from Chimney Rock to Charleston (UNC Press). And in that book, I found one answer.

There's no way I can explain the counterintuitive-weathering-process-of-massive, ie unfractured (which appears to be a significant point)-granite-formed-during-the Alleghanian-orogeny though another source says Acadian-that I think has something to do thrust sheets of opposing terranes, so I'll simply say land collided, forming the mountains, and like other monadnocks, stuff around what is now Stone Mountain eroded leaving behind the granite dome. Let's get back to our journey.

With twenty miles of trout stream and sixteen miles of bridle and hiking trails1, Stone Mountain is a popular destination, and because it's a state park, it offers convenience facilities and maintained trails.

We started at the visitor's center, located just inside the park. After picking up a map and information, we continued down what turned out to be a loop to a parking lot. The trailhead in this area led to both the upper trailhead of the strenuous 4.5 Stone Mountain Loop Trail, and the summit view of the Stone Mountain falls—our goal for this trip.

Note: if you visit Stone Mountain State Park, wear appropriate shoes. The granite trail at the top of the dome, especially near the falls is wet in places, and with the slant of the rock, is dangerous. A fence separates visitors from the falls itself (I can only imagine how many people slipped over the edge before it was built) which I used while walking toward the steps that led to the base of the falls. 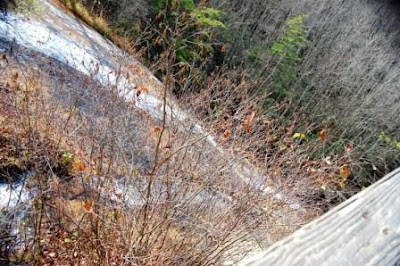 Falls at Stone Mountain dives toward the ground at a dangerous angle
Did I say steps? Try towering staircase. It's a tall waterfall, at least 200 feet, which means there's a lot of steps. The photos below, taken during the journey down, should give you a good idea, though not all sections are visible in either photo: 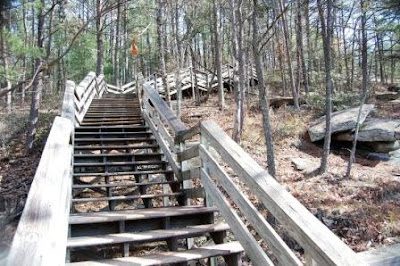 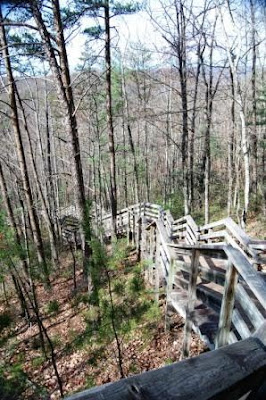 But the view is worth the effort: 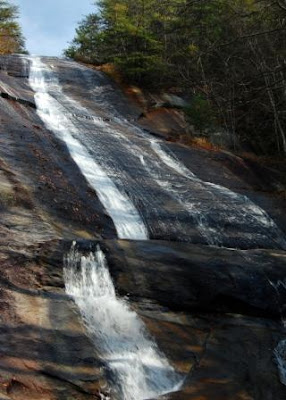 Despite the presence of at least a dozen other tourists, we were able to get that photo, but it took some time. While we waited, we sat on a large boulder enjoying a cool spray from the frothy foam.

This wasn't the end of our trip to Stone Mountain, but the remainder is too much to discuss here. I'll cover the rest in my next post. Photos from this portion of the trip, as well as what's to come, are below.

For more information on Stone Mountain State Park, to to http://ncparks.gov/Visit/parks/stmo/main.php