Before I move on to the next portion of our waterfall wanderings, I thought it best to spend a little more time at Skinny Dip Falls.

The trail to the falls is located off the Blue Ridge Parkway. When I say "off", I mean park at the Looking Glass Rock Overlook, look both ways and cross the street, and enter the trailhead, marked by a small post, at the northern tip of the parking lot. The trail is short, about a half mile according to my waterfall sources, but it's an interesting walk. We encountered this after entering the woods: 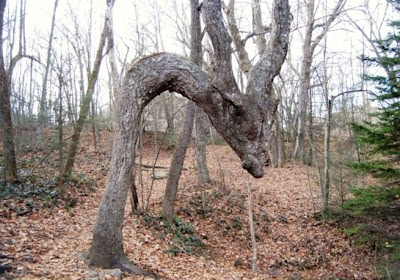 Yes, it's every bit as creepy in person.

It's important to note the trail is rocky and wet in places: 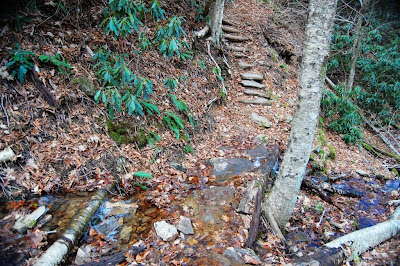 In at least one sloping section, we had to pick our way over boulders the size of laundry baskets. Not difficult for us, even with my sore ankle, but one elderly lady we encountered had problems. She and her companions never made it to the falls, and we didn't spot them on the return trip, so they apparently made the practical decision to turn back.

After crossing the trickle of a stream shown above, and ascending the rock steps, we finally reached an observation platform and were delighted by the scene before us. Down a slope and across the stream, a lovely cascade nestled between rocks and rhododendrons spilled into a clear pool of water: 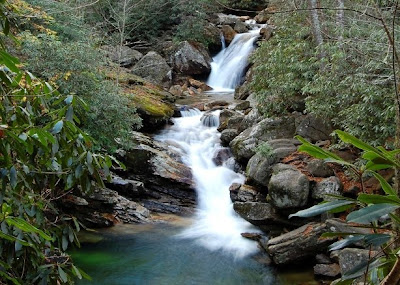 It was far more accessible than I imagined. A set of wooden stairs, somewhat steep, leads to a bridge over the stream, allowing visitors to get a closer look at the falls.

Though, again, it's dangerous to play on rocks around waterfalls. Please use caution while visiting this, and any waterfall.

As we walked down the steps toward the bridge, we spotted a third cascade to our left, located straight out from the falls, spilling over smooth rocks near the bank: 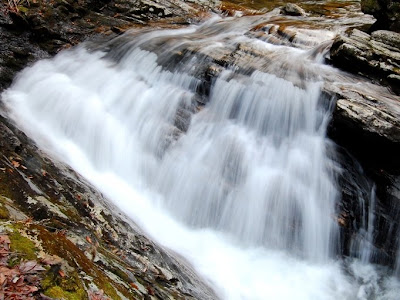 Ahhh, beautiful. If I'd known how attractive this waterfall was, we wouldn't have passed it so many times while heading toward other Parkway destinations. It's a must stop, but be prepared, it's also a popular stop. We were fortunate to snap several pictures of the falls by itself. The rest of our images include both people and dogs.

If you're interested in visiting the falls, and if you haven't purchased Kevin Adam's book yet, Waterfall Rich provides terrific directions on his ncwaterfalls.com website, which include trail details.

Before traveling to the Blue Ridge Parkway, always check the National Park Service's website for road closures. It's frustrating to have your heart set on spending the day at one of the Parkway's hotspots only to encounter a set of barriers blocking the road.
Posted by Kimberli
Email ThisBlogThis!Share to TwitterShare to FacebookShare to Pinterest
Labels: ncwaterfalls.com, Pisgah National Forest, Skinny Dip Falls, waterfalls, Western NC