If a land or nature conservancy obtains a certain property, there must be a good reason. Flower Hill has Catawba Rhododendron. Peachtree Rock Preserve in South Carolina has a unique pyramid-shaped rock resting on its point (yes, upside down!) A few weeks ago, CarolinasAdventures co-moderator, Kelvin Taylor, (KT) took eastern CA members to another Triangle Land Conservancy property, Temple Flat Rock in Wake County, to introduce us to the natural wonder there.

Our little band decided to meet on site, and after passing the narrow entrance, we finally found the dirt road that led to a small parking area. I'm sure that, under normal circumstances, this parking lot is more than sufficient, but two SUVs and two sedans made for a tight fit. After situating our vehicles, we began the hike.

Located on a rural parcel between Zebulon and Raleigh, to the untrained eye (mine), this TLC land looks like a large, overgrown meadow bordered by a mixed forest. We walked through the field, taking pictures of vetch and morning glorys, and generally exploring what we found. A deer blind stood near the trees, overlooking an area littered with corn cobs. Whether or not hunting is permitted to help manage the deer population, it served as a reminder to wear orange during hunting season.

But we weren't simply meandering through the woods. We were searching for the outcropping that gave Temple Flat Rock its name.

"A rock!" you say. "Splendid, Kimberli. Thanks for taking us along on this trip."

Not just a rock. Not just a flat rock. And certainly not just a very large flat rock that can be seen on Google Maps. As it turns out, this is yet another one of North Carolina's unique natural communities.

The queen of ecosystems I'm not, so to learn more about these Piedmont outcroppings, I turned to a couple of my resources: exploring north carolina's natural areas, and the ever intimidating, Classification of the Natural Communities of North Carolina (Third Approximation).

As it turns out, exploring has a section on "Rocks, Soils, and Plant Life in the Central Piedmont" (p 167). Here, I learned about the existence of geologic areas such as the Carolina Slate Belt, the Raleigh Belt, and the Triassic Belt, which contains "horizontal layer of rock". I found a map on the NC Dep't of Environment and Natural Resources site, but because of the size of the graphic, I'm unable to determine in which belt Temple Flat Rock is located. 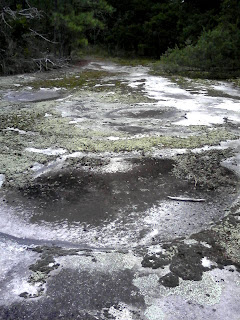 It was in Classifications that I learned the horizontal rock and the plants that grow on them are a community referred to as Granitic Flatrock (p 104 printed version). The book speaks of the shallow soil, and the "distinct species" that live on the open rock areas. We saw examples of this in person when we finally found the flat outcropping. It was surprisingly large--easily as big as curved Governor's Rock on SC's Table Rock Mountain. A variety of lichens and moss grew on the rock and in areas where dirt has collected over time. KT seemed particularly amazed over one species of moss. But I had my sights on another plant.

I know little about rock outcroppings, but one thing I am aware of--where there's an outcropping, there's usually cactus. It didn't take long to find the first of several I would spot during our visit. 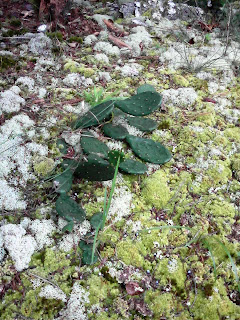 Why it grows around outcroppings, I don't know. I expect to find them in Texas and the southwest, not growing along rocks in North Carolina.

(Another mystery: the partially sunken, lone grave of Jonah Robertson, buried in 1966. We found it while searching for the outcropping and sheltering ourselves from a light sprinkling rain. Why was he buried here and where is his family? A quick search brought no answers.)

Unfortunately, the threat of more rain convinced us to leave our camera in the car (I snapped the last two photos with my phone), so we have few pictures from this portion of our trip. However, KT had his camera on hand. To see his photos and report, click on the following SCENIC NC blog post link:

An added bonus: as CA's resident botanist, he can delve deeper into the mysteries of granitic flatrocks and the species that grow on them. But after visiting Temple Flat Rock, I feel safe in saying it's a wonderful example of this particular natural community, and I'm pleased the Triangle Land Conservancy is protecting it from people like me, who, unaware of its status and importance, would look at the rock, complain of its presence, and then take a bulldozer to it so I could claim the land.

On another note: You may recall that in an earlier post, I claimed I wouldn't go back in the woods until the bugs had died. I did so on this occasion because of the hope of seeing wildflowers that are once again blooming in abundance. I'm not a fan of chemicals, so I didn't use the bug spray in my pack, choosing instead to stay on the trail. MISTAKE! I had more chigger (aka red bug) bites and seed ticks than I could count or even find. If you go in the woods, please take appropriate measures as you're medically able to fend off these pests.

For more information on Temple Flat Rock, go to http://www.triangleland.org/lands/tlc/temple_property.shtml

Copyright 2009. All Rights Reserved. Do not use or distribute.
Posted by Kimberli
Email ThisBlogThis!Share to TwitterShare to FacebookShare to Pinterest
Labels: land conservancies (TLC), Natural Communities, Piedmont

Enjoyable read Kimberli. This place is worth a revisit to explore the what spring floral treasures might be hiding in the outcrop and surrounding woods.

Thanks, KT. I had the same idea about the spring. We'll have to make a day of TFR and White Pines next March--as long as we bring bug spray.

Thanks for introducing us to the TLC lands, and for leading the hikes!