What does Gettysburg have to do with the Carolinas? Besides the fact that many southerns died there, and a North Carolina memorial now stands on the grounds, we visited the landmark during a recent trip to beautiful Pennsylvania.

My husband was scheduled to attend a conference just south of Harrisburg, so we crossed the Mason-Dixon a day early to explore the region. Our first stop: Gettysburg Battlefield, located just north of the Maryland-Pennsylvania border.

What I know about this battle is far less than I should--that it was fought between July 1-July 3, 1863, that it was a major offensive on northern soil, that pneumonia had taken Robert E. Lee's "right hand" just months earlier, and that by the end, many had died. But like Bentonville Battlefield, what I saw made me want to know more. I want to learn about the Tammany Regiment, about the High Water Mark, to figure out if having to defend their families and land with their lives showed them why southerners felt they had to do the same, even southerners like Stonewall Jackson, who, before the war, had hoped that cooler heads would prevail and the Union would be preserved.

I know, that surprised me as well. 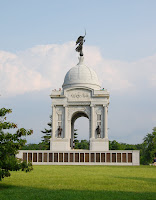 We spent about an hour on the battlefield, reading plaques, climbing the spiral steps of the mammoth Pennsylvania Memorial, where we stood, higher than is comfortable for me, gazing over the grounds. We didn't know about the auto tour then. Instead, we headed to the Visitors Center, which closed ten minutes before our arrival. But we picked up a map at a kiosk in the event we could return on this visit.

The auto tour starts at the Visitors Center and has sixteen stops, based on the battle's progression. The first stop is McPherson Ridge, where the fighting began. The last stop is National Cemetery, the site of Lincoln's famous address, delivered on November 19, 1863. I'm told the light and sound "Cyclorama Experience" at the Visitors Center shouldn't be missed (tickets required). So that's on the list. In addition to that attraction, the Visitors Center offers a bookstore and tickets for various guided tours.

Like Bentonville, Gettysburg is an horror that should not be forgotten. Not to hold onto old wounds, but as Lincoln advised in his address, to learn from them so the future does not repeat itself, as--sadly--it so often does.

Four score and seven years ago our fathers brought forth, upon this continent, a new nation, conceived in Liberty, and dedicated to the proposition that all men are created equal.

Now we are engaged in a great civil war, testing whether that nation, or any nation so conceived, and so dedicated, can long endure. We are met on a great battle-field of that war. We have come to dedicate a portion of that field, as a final resting-place for those who here gave their lives, that that nation might live. It is altogether fitting and proper that we should do this.

But, in a larger sense, we can not dedicate, we can not consecrate – we can not hallow – this ground. The brave men, living and dead, who struggled here, have consecrated it far above our poor power to add or detract. The world will little note, nor long remember what we say here, but it can never forget what they did here.

It is for us, the living, rather, to be dedicated here to the unfinished work which they who fought here, have, thus far, so nobly advanced. It is rather for us to be here dedicated to the great task remaining before us – that from these honored dead we take increased devotion to that cause for which they here gave the last full measure of devotion – that we here highly resolve that these dead shall not have died in vain – that this nation, under God, shall have a new birth of freedom – and that government of the people, by the people, for the people, shall not perish from the earth.
Posted by Kimberli
Email ThisBlogThis!Share to TwitterShare to FacebookShare to Pinterest
Labels: Battlefields, Gettysburg, Pennsylvania

Yes! Huge applause for including the Gettysburg Address. It's sad how many Americans have never read it or care about what it means.

As for your post, what can I say but what I always say? It's wonderful and very informative. Whenever I go to a historical site, I get chills. I've never been to this one, though. I'm a little bit jealous that I couldn't go:) But I'm very happy for you. And I'm glad you share it here.

I just thought of something. My husband has relatives in that area! Thanks, Kimberli.

Thanks, Julie. I felt it was important to include the speech. We've only been to a few battlefields in the past few years (one Revolutionary and two War Between the States). Knowing hundreds, if not thousands of men died on the ground I walked overwhelmed me.

I hope you have a chance to visit PA. Central PA is hilly (though I haven't yet figured out if the area we visited was in the foothills or if the hills we saw were mountainous peaks) and beautiful. We stayed on the edge of Cumberland Valley, and I noticed a lot of state parks, state forest, and other such areas. I know they have waterfalls and hiking trails, too. Sounds promising, but I wouldn't want to visit in the winter. I about froze up there in May!

You should definitely take the guided auto tour in which the guide drives your vehicle around the battlefield. Once you tell them you are from NC, they will tailor the tour to give you extensive information about the NC regiments in the battle. The NC monument is one of the most striking in the battlefield.

One of the most moving places I have visited.

I agree! And thanks for the recommendation. We'll definitely spend more time touring the entire grounds during our next visit. I'm doubly sorry to have missed the NC monument now.

Informative post and great shots of the battlefield! Our battlefields and national cemeteries are inspiring places and quietly show the sacrifice of those who fought to make this country free. Your first shot in the slide show is only a few miles from us and we have visited Gettysburg many times. As you drove north through Maryland on US 15, Catoctin Mountain was on your left. It is the first ridge of the Blue Ridge Mountains in Maryland, running from near the PA border to VA. It reaches a height of 1900 feet and does have trails and parks. Cunningham Falls is near Thurmont. A little further west is South Mountain, also a site of a Civil War battle. The Appalachian Trail traverses the 70-mile ridge of South Mountain. There were other Civil War battles in this area, most notable is Antietam (or Sharpsburg); the bloodiest single day of the war.

Thanks, Lew! I appreciate the feedback. And thanks for the information on the area. This was our first visit to the region, and we were vastly unfamiliar with what we saw. I need to return to PA sometime this summer--and we'd like to stop at Antietam--so this information helps.

Beautiful country up there. I'm pleased to have made its acquaintance!