Exciting news! Last weekend, WYFF Channel 4 in Greenville, SC featured your humble blog on their Sound Off South segment of the morning news. I traveled to the glorious South Carolina Upstate for the interview, and after a ride down a portion of the Blue Ridge Parkway, followed by a somewhat sleepless night, I met Kelly Coakley at WYFF's studios. 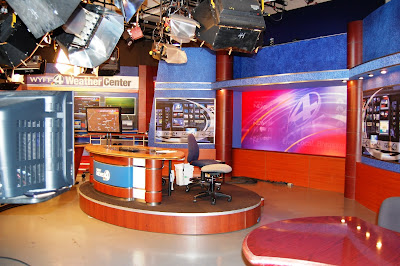 Part I of the interview is below. I'll post Part II when it's available. I'm told I presented a calm demeanor, but in reality, I was nervous. Consequently, I forgot to mention a few things I'd hope to present. So below the clip are the answers I gave in the pre-interview. Hopefully, I'll get the information across one way or the other.

And the answers I'd hoped to give:

How did you pick the topic and name for your blog?

The topic flowed naturally from our adventures. In the spring of 2006, after two years of exploring SC and western NC, we joined a local hiking group thinking we'd seen pretty much all there was to see in the area. In addition to teaching us we had much to learn about the Carolinas, they introduced me to a creature called the trip report. I wrote several for the group after I joined, and wanted to share them with family members as well, so I started a blog and named it "Where the Buffaloe Roam".

A year later, the Fish & Bird Curator at Cypress Gardens left a comment on my post about that Moncks Corner attraction, which shocked me. I installed a counter and discovered more people than I'd imagined were accessing my posts. That taught me people were searching for information on Carolina destinations, and I had to do a better job presenting our experiences, which entailed including more relevant facts about those destination, and spending less time focusing on us. NCwaterfall.com's Rich Stevenson is a member of my hiking group. I'd accessed his site on numerous occasions before hikes, so I had a good idea of where to begin.

After shifting and improving the focus of the posts, I redecorated the site and included pictures to give visitors a visual portrait as well as a written one. The name change came last. Carolina Trails (which is part of the blog's address) was not only taken, it didn't fit the scope of my content. After brainstorming a bit, I worked out the new name, Carolina Towns and Trails.

How do you decide where to visit?

We have a general list of places we want to visit, but no set plan to get there. Often, we get in the car and one of us asks, "Where to?" Sometimes we haven't figured out the answer until we're well on our way. Other times, we'll have something in mind but will change our plan after pulling out of the driveway. I can't recommend doing that. But then again, it attests to the fact there are numerous destinations to choose from in the Carolinas.

What are your top three destinations in SC?

Off the top of my head, in SC:

1. Charleston, because there's so much to do in that city, and because of the proximity to other Lowcountry destinations. From there, we'll pop over to Edisto Beach, Beaufort, Mt. Pleasant, Summerville, Sullivan's Island and more.

2. Murrells Inlet. We love it. Love the restaurants, the Veterans Pier, the Marshwalk, Brookgreen Gardens and now, Huntington Beach State Park. We learn more about it every time we go. It's also close to Pawleys Island, Georgetown, Cape Romain, and a stash of yellow fringed orchids we like to visit.

3. The Upstate. We lived in this area for four years and felt very much at home. Downtown Greenville is a gem. We often drove down Main Street, then dined, and followed that up with a stroll along Falls Park. We love the mountains and hiking trails nearby as well. When family or friends stopped by for a visit, we usually took them to Table Rock Mountain and then up to Bald Rock and Caesars Head before heading to our favorite NC destinations...

(To Be Continued)
Posted by Kimberli
Email ThisBlogThis!Share to TwitterShare to FacebookShare to Pinterest
Labels: CTT In The News, Interviews, Upstate SC

Thank you, Eric! It was a pretty cool experience.

If you haven't already done so, you may want to consider contacting Kelly Coakley. She told me she's hoping to feature A Day's Drive From Greenville on the Sound Off South segment. If you need her contact info, send me an email at carolinians at carolinatownsandtrails dot com.

CONGRATULATIONS! This is so exciting!! I knew something was brewing...lol! What wonderful news. You did a beautiful job. You don't seem nervous at all. You look very professional, which you are.

I also enjoyed hearing and reading more about the background of your site. I think you were wise to change the name. It really reflects what you're doing here.

Your top three destinations in South Carolina are right on. Like you say, they also make great jumping off locations for other areas, too.

Well, Miss Kimberli, I am just tickled to death! You do spectacular work, and this is a well deserved honor. I'm headed back to look at the interview again. I also look forward to Part II:) Congratulations!

Thanks, Julie! Thanks also for stopping by the blog on a regular basis. Knowing how much you, Lew, and others enjoyed seeing pictures of NC when having to live elsewhere motivated me to show more.

Part II is up now. And like I said at the end of that post, it's all about sharing the Carolinas with others. So thanks for stopping by!

Great Job Kimberli! I finally got around to checking out the video. I am proud that my little hiking group inspired this!

Thanks, Jack! Yep, my little blog was born from my time in CarolinasAdventures. Y'all have taught me a lot, including, as I said above, that I have a lot to learn about the Carolinas. Thanks for being such a great moderator!