Columbia, SC: Honoring the Past, Focusing on the Present

One score and a month or so ago, we moved to Columbia, South Carolina, a land flowing with flowering trees. Delicate dogwoods and azaleas bloomed everywhere, nearly knocking our poor Texas-dried eyes out of their sockets. The lush (we took this picture in early spring, so you'll have to use your imagination) vegetation wasn't the only thing that floored us. Along with wide streets and magnificent architecture in the downtown area, we soon learned this city was steeped in history. With several marks in its favor, I decided to check it out.

The kids were little then, and couldn't protest too much when I put them in the car to explore. They didn't mind when we ended up at Sesquicentennial State Park or Riverbanks Zoo. But they did sigh a few times after I checked out Sherman's March Through the Carolinas and immediately began visiting places mentioned in the book.

I expected to find that same city on this visit, and at first glance, it appeared we had. After pulling into the Clarion Hotel, located on Gervais in the historic downtown area, I spotted a sign that said Sherman headquartered there during his stay. 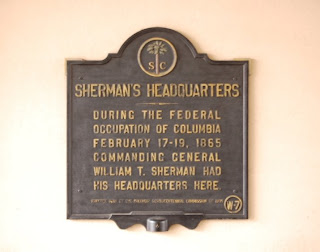 That's the Columbia I remember.

Despite a light rain, we visited SC's capitol, aka the State House. As in the past, pink azaleas framed the immense Greek Revival structure, and gold stars still mark the spots where Sherman's cannons hit the building. 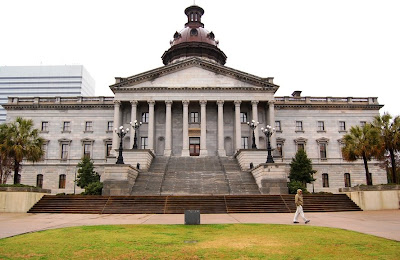 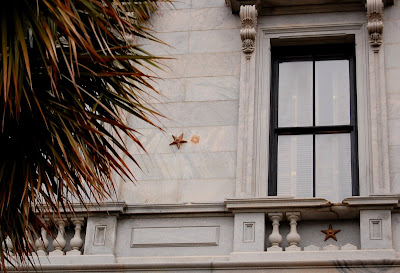 As I mentioned earlier, the streets are wide, some stretching one hundred and fifty feet across, while others, a mere hundred feet. The city planned it so because....

The width was determined by the belief that the dangerous and pesky mosquito could not fly more than 60 feet without dying of starvation along the way.

Residents and visitors still enjoy those wide streets, which are even more beneficial than they've been in the past.

On this trip, I once again settled into what I thought was the pulse of the city. But as I soon learned, Columbia has undergone several changes in the last decade, and it's now a good mix of past and present. Modern buildings soar beside stone or marble structures. On the way to Chick-fil-A and Atlanta Bread Company on Main Street, we passed the Doric-columned Supreme Court building. Several years ago, planners revitalized an old warehouse district by converting it to a trendy hub called the Vista, complete with condos, art galleries, and several restaurants. The brick and woodworking creates great ambiance. And for the record, the Blue Marlin has great key lime pie.

Columbia also appears to be big on the arts. We passed a dance conservatory, and later, made a grievous error by not going to the Columbia Museum of Art. However, we did see a few, err, artistic pieces around town: 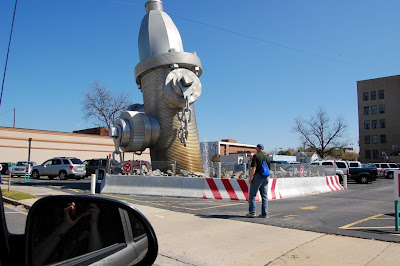 Exploring time was limited on this trip, so we didn't have a chance to take a hike at nearby Congaree National Park, or to search for the Fort Jackson passage of the Palmetto Trail. Nor did we go to Elmwood Cemetery or the Caroliniana Room at USC. But I did make it to one attraction on my list, and I'll cover that in my next post. Until then, here are a few pictures:

And if you'd like a review on the hotel, the Clarion is conveniently located in the downtown area and consists of a six-floor "tower" and adjoining two floor units. A restaurant is located on the first floor of the main building, but because of that, the hotel does not serve a free continental breakfast, nor did we have a refrigerator or microwave in our room. That meant eating out three times a day, which put a strain on our budget, and our diets.

Their wireless Internet connection is fairly weak as of this writing. An antenna went down the night before our arrival, so the hotel moved us across the hall where we could try to catch a connection they share with a business across the street. A bit better, but the connection still dropped far too often.

Beds are comfortable, but we live in the country now, and we're not accustomed to the sound of traffic at night. But it's convenient, especially if you don't want to deal with parking (you WILL receive a ticket if your meter expires or if you park in the wrong place.) However, if you're on a budget and you need to stay in the downtown area, you may want to check out the Rodeway Inn.

Another beautiful post. I love South Carolina. The history is so interesting. This is great.

I also chuckled at your description of taking the kids. I did the same thing. My daughter could read a map in the first grade...ha! Now my daughter attributes her "no fear" of driving anywhere to her adventures with me. I'm not sure if that's a good thing or not:)

My girls still roll their eyes when I mention those days. They can't get too upset. Once while in Florida, to their suprise, they ended up at Disneyworld.