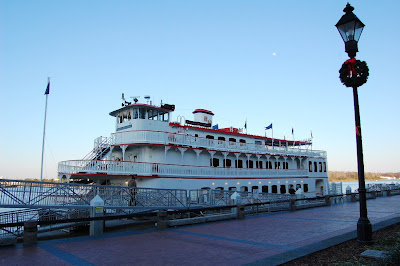 So the brochure for the Savannah River Queen states. That and the sight of that majestic boat floating on the Savannah River reinforced every notion we had about the trip, and as one who loves Savannah, it pains me to admit we had a horrendous experience. But stick with me, because I have what I hope is good news.

We traveled to Savannah last week for a conference on, of all things, architecture (so fitting for that grand town.) While there, I indulged in what I promise you was research for my novel-in-progress. A pivotal scene takes place in Savannah, and I had to experience several things first-hand--including a ride on the riverboat. After the conference, we went to ballast-stone covered River Street and purchased two tickets for the one-hour narrated tour on the Savannah River Boat Queen.

I was thrilled. Long ago I took a ride on the Belle of Louisville and the experience left me wanting more. This was my husband's first such ride, and I'd hoped it would be as special. After boarding, we went to the promenade deck (via steep steps. The boat doesn't have an elevator) and settled at a table on a covered patio. But while the brochure talks of tales and historic facts and a river once used by founders, in reality, we went past factories, warehouses, and the biggest pile of scrap metal we've ever seen: 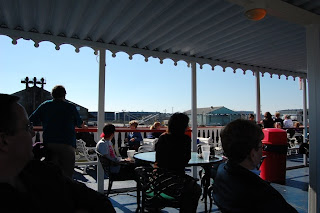 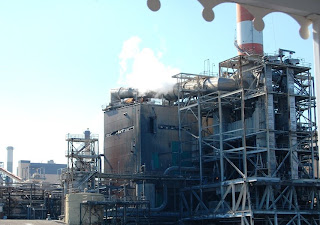 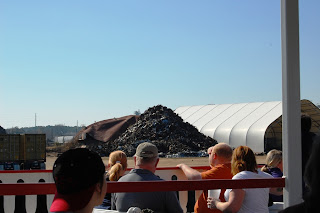 And the captain talked about each of these as we went. This was so far from the romanticized version I had, and had written in my novel, that I was almost sick. Though my husband tells me the queasiness may have been caused by the fumes from a passing refinery. I know the particles had me coughing a time or two.

So was there an upside to the cruise? We did see a few interesting sights: 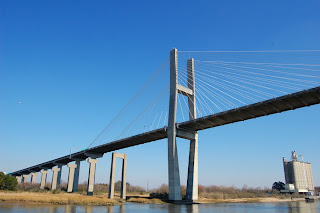 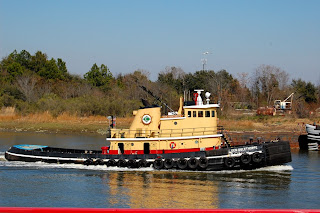 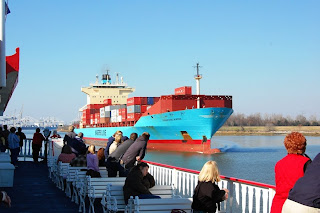 And of course, the view of River Street from the boat is worth climbing those steps: 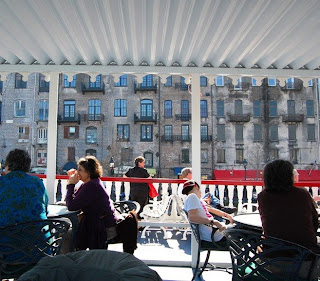 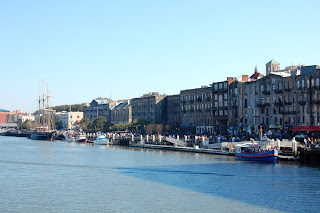 So what's the good news? I called the company today and found out the captain doesn't always head toward the industry section. At times, they sail eastward toward Fort Pulaski.

After what we went through, I had to ask. "Why don't they go in that direction all the time?" I'm told it depends on river traffic and, "there isn't anything to see." The rep I spoke to obviously didn't take the refinery tour.

But there's more good news. The Riverboat Company, which runs the boat, offers longer dinner, brunch, Gospel, and--this has to be the best--moonlight cruises. Imagine that boat lit up like a grand chandelier skimming over dark waters. Could anything be more romantic? While I haven't yet taken any of these tours, judging from our experience, they should provide the passenger with distractions that will help make the cruise a memorable one.

Which is good for my novel, since my characters are taking the dinner cruise. Guess what direction the captain chooses on that trip!

Would I take another ride on the Savannah River Queen? If it were the dinner or moonlight cruise, if I knew we would be heading east, and if I had a coupon (I'm cheap), I would be willing to give it another try. So don't totally discount this attraction. Just be aware of what you may encounter.

If I didn't talk you out of it, for more information on Savanna River Queen tours, go to www.savannahriverboat.com/

And be prepared to ask questions.

Research? Tee hee! Why can't I get to do research like this?

But seriously...how beautiful! I will have to admit that I'm just a tad bit jealous. Oh, okay...I'm green with envy! But thanks for the beautiful post. As always, you take me there with you!

I'm sorry to have taken you on this trip (I'll bet you could smell the oil in the air from those photos!) but I felt obliged. I hope hubby and I can run back down there someday and take the dinner or moonlight cruise. I'd like to give this attraction another chance.